'The Rise of Skywalker' may not offer many surprises, but it executes a course-correction and a finale with heart...

The galaxy is hearing strange whispers that the long-felled Emperor Palpatine is alive – perhaps risen from his supposed grave by the dark forces of the Sith. Kylo Ren might seek to hold control of what’s left of the Empire, but he has no truck with any plan Palpatine might have: his own mission is to thwart the Emperor and still bring Rey over to the Dark Side of the Force.

Meanwhile Rey and the rebels are considering the choices they have – as individuals and as members of what’s left of the ragtag Rebellion. Rey continues to try to master the Force, but Finn and Po find they need her more than ever on dangerous missions – especially when they may have a clue to where the broadcasts from Palpatine are originating.

With every mission a potential trap waiting to close on them and every decision possibly leading to potential tragedy and conflicting agendas across many star-systems, the different sides of the Force are consolidating and the fate of the galaxy will be in the hands of either the most ruthless or the most well-planned.  But as Rey and Kylo face not just each other but the consequence of their weaker moments and a destiny that could be just as dark , can anyone truly plan for the powers that are about to be unleashed as massive star-fleets engage above?

The Rise of Skywalker was the first Star Wars film for which I didn’t have that singular anticipation of old. The ‘wanting’ to see, but not ‘needing’ to see, despite the films despite them being part of my cinema-going existence since the age of nine. Middling entries in the film franchise and the recent by-the-numbers imagination in The Mandalorian had certainly lowered expectations to the point where I saw it on opening night but with little of the pure adrenalin I once experienced before the lights went down and the familiar music began.  Thankfully, over two hours later I left the cinema with a feeling that I’d at least seen the best of the recent trilogy – though that’s grading on a curve – saved not so much by pushing boundaries or offering great surprises, as being a love-letter to the galaxy far, far away but using all the tools offered in a post-Infinity War market-place to tie everything off in a bow. Big, brashy, silly, charming, indulgent, frustrating, but clearly made with affection. Far from perfect, but still an experience.

There’s no doubt that on a number of fronts, The Rise of Skywalker is a winner. The widescreen visuals are often stunning, even when they are often reduced to the modern trend of whizzing by in consistently dizzying, physics-defying spectacle. Water-drenched neon hues drip majestically in and out of frame and shadows linger menacingly at its edges as lightsabers swish by. From the almost medieval alleyways of Kijimi to the Burning Man-ish sands of Pasaana, to the wreckage of a Death Star and huge cavernous tombs that hold more than the dead…some of the locations are really only there as show-pieces and not that well-developed thematically before we’re moving on again, but the production-designers and digital artistes have certainly earned their wage-packets in creating them.

But there are legitimate fault-lines, or perhaps more accurately elements and decisions that don’t always fit in as seamlessly as they might because of the packed-in nature of getting everything in there. You’re going to accept the apparent Palpatine resurrection from the outset or not, a contrived useful plot-device boogeyman that haunts the film before revelations later in the running-time (and which will need you to excuse Ian McDiarmid’s venom-dripping exposition that is de rigeur for any big-bad who’s about to regret not cutting to the chase). The balance of the Force is the thematic lip-service heart of the film and needs a despicable enemy to bring it together and McDiarmid abides. On the other hand, the much-spoken-of Knights of Ren, for all their imposed legendary threat, turn out to be a nameless support act with barely a few minutes of coverage and as disposable as shadowy stormtroopers.

The more recently-introduced idea that the Force can not only offer communication through great distances, but also move objects across them, is used far too casually here – often as a shorthand or convenience that belies the supposed effort involved. At various points it’s also easy to see director J J Abrams’ to-do checklist of scenes, a series of lens-flare bullet-points with which he tries, admittedly quite successfully, to execute something of a satisfying course-correction after the recent chapters failed to satisfy. It’s clearly done with the intent that this really is the last Skywalker-related Star Wars outing and that certain things needed to be included come metaphorical hell or literal high-water before the day is done. To appease the party-faithful there are frequent references and callbacks and ‘greatest hits’, some subtle and smile-worthy, some blatant and  story-essential and though most hit their emotional mark with different degrees of chest-pounding nostalgia, not all of them work logically nor without a slight feeling of opportunism.

The pacing is also strange and often questionable, with the early part of the film shoving massive set-up elements of the ‘this is where we are now‘ variety (introduced in the opening text-crawl) and suffering the most by essentially having us start with a cosmic scavenger hunt as our heroes search for ‘Sith Wayfinder’ devices to guide them to the film’s climax. It doesn’t bode well and then it becomes clear that trailer-elements we’ve seen are also flying past quickly and are not for the climax we’d supposed, just footnotes along the way – which is a double-edged dagger with a ‘so where do we go from here?‘ concern. But the film seems to find more of its footing as it progresses… shifting its focus to primary concerns, though this means the dumping of some fan-favourites / characters (R2D2 and Rose get shorter shrift) and elements for which one might expect a better pay-off later that never comes. (What did Finn want to tell Rey? We may never know…). It also makes newest additions  (Keri Russell and Naomi Akki) somewhat superfluous to requirements and feels more like like a set-up for multimedia spin-off tie-ins. Dominic Monaghan also pops up, essentially stealing all of the dialogue Rose could have delivered.

At the forefront Daisy Ridley as Rey gives her all, perhaps her best performance of the trilogy, finally being more than an archetype. Adam Driver still gives off an emo-Vader vibe that reaches for angst rather than melancholy but is somewhat redeemed. John Boyega’s Finn has plenty of action, though still lacks some needed development and Oscar Isaac’s Poe effectively transitions from flippant fighter to erstwhile leader without quite channelling the Harrison Ford charm needed for us to feel its weight. There’s a slew of more familiar faces to greet along the way, some well-publicised and telegraphed, some definitely not – but it’s hard to find a single one that doesn’t bring more than it takes, even if there are niggling questions as to why they happen. Of course, the loss of Carrie Fisher makes us wonder what the shape of the film would have been if she had lived – it was said that while The Force Awakens was Han’s moment and The Last Jedi‘s was Luke’s, this would have been Leia’s time to shine – but it is truly remarkable the amount of convincing screen-time Leia ultimately has (with almost all of it created from existing or unused footage and sleight-of-hand compositions or editing rather than CGI-performance trickery).

Your opinion on The Rise of Skywalker will no doubt rest on your age, ability to go with the flow and your individual expectations – what you hope to see, what needs to be seen and what is seen, not always being exactly the same thing. Forty-two years in the making will never produce a one-size-fits-all ending and while the film tries to tie up a lot of threads, there’s simply too much baggage to do so, though it makes the best effort. Yes, there’s more contrivances than surprises, more zig than zag, more prestige flourish than actual content but the saga’s original Saturday Morning serial elements shine through, for better and worse in its broad strokes and easter-egg detailing. It’s not the absolute classic or of the ground-breaking nature that the original Star Wars offered – not even close – but nor is it remotely the drive-by landspeeder-crash it could have been and which some were expecting. As modern blockbusters go, it probably delivers everything needed and simultaneously does give some honour its amazing heritage. Messy but magic.

The Force is still majestic even if its luminosity occasionally flickers… 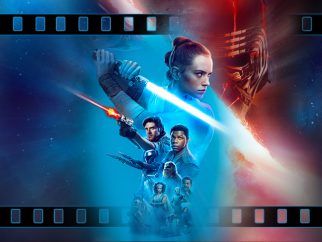