As an explosive 'The Mandalorian' wraps its first run, what has been redeemed?

Cornered and out-gunned and with no easy way of escape, it looks as if The Mandalorian, Cara and Greef’s days are numbered as Moff Gideon gets ready to annihilate their stronghold.  But far away in the desert, a re-programmed IG-11 still has some significant firepower and is racing to their aid. However even if they can escape the battle-scarred saloon in which they’ve fund themselves, they have significant injuries and no real way out of town. On one side is a battalion of stormtroopers and on the other a molten river running through the sewers.

Can a tiny infant with ‘magic hands’ help them survive and even if it can, what sacrifices may need to be made?

The eighth-episode and finale for the first season of The Mandalorian is entitled ‘Redemption‘ (directed by the ever-reliable Taika Waititi, also voicing IG-11) and while it certainly ramps up its core elements: Star Wars iconography, solid shootouts etc, its delivery of such is less a redemption of the writers’ room and more a clear indication of a bigger financial investment.  The shoot-outs are larger-scale, the explosions also big enough, the direction is good and some of the banter is fun, which may be enough for some viewers. But there are still significant problems.  With the exception of a delightful ‘Rosencrantz and Guildenstern are Dead‘ type sequence between two speeder-bike riders at the start, the script and dialogue remain as clunky as ever and in service to irregular plot-beats. (The most blatant being when Weathers later points to a river of molten lava and says “That’s the lava river!” just in case the SFX people don’t do their post-production work). Giancarlo Esposito’s Moff  Gideon is still imposing, but is made to posture and the “I’ll give you until night-fall to surrender” when he has our heroes on the ropes and back-foot already is just silly. Equally much is made of IG-11’s reprogramming to protect the Child at all costs, but then it traverses half the desert back to town, deliberately bringing them into the middle of a fire-fight, which while convenient to story, really doesn’t make any more sense than leaving it in the care of Cara to stay with Mando.

The big reveal of Mando without his helmet is… well, strange and anti-climactic. It’s great for the story to find a moment where it comes to that and we finally see a bruised and battered Pedro Pascal sans head-gear – yet with a logic-defying moustache – but the execution of such is brief, the reason is half-hearted and then has absolutely no consequence – we’ve seen more examples this season where it would have felt more organic. A little like seeing Halle Berry do that now notorious, contractually-obligated but emotionless topless scene in Swordfish, it feels awkwardly contrived and at odds with everything else – the sequence could be snipped away and not affect the story one bit. At least Stallone’s Judge Dredd has the decency to roll with it once the reveal happened. (One wonders if the brevity and nonchalance of the Pascal reveal is deliberate, whether there was internal disagreement and the scene was for ‘coverage’ in case the decision went either way?).  But now that it’s happened it will also affect things going forward – to continue Mando keeping his helmet on would seem even more contrived than before with no mystery to the audience left dangling there. Also, now we have a more filled-in backstory and his true name revealed as Din Djarin, what do we call him?

Caught between a soup of knights templar, western and samurai tales, into which it dips vigorously, the series has seemed like a marketing exercise for the tie-in products that have failed to materialise on the shelves (Disney‘s potential loss there must literally be the equivalent of a healthy opening weekend). There’s a plethora of decent ideas and nostalgia thrown into a Sarlac pit and mixed with eye on nostalgic quantity rather than quality.  Show-runner Jon Favreau, while inarguably a proven A-List director, has indulged himself, submerging in the minutiae of a galaxy, far, far away but who has produced a journeyman exercise that feels fun but not remotely essential nor ground-breaking, a toy-shop-window for a streaming platform. It’s a decently-executed counterbalance to the theatrical release of The Rise of Skywalker (the film having the big-budget whizz-bang momentum while the show has the notably slower feel of a feature’s s side-element singular plot-strand stretched beyond its natural length), but it all feels akin to a glossy but lesser side-project, an Agents of SHIELD to the Avengers, if you will.

The Mandalorian already has a second season guarantee (due to be seen in ‘FALL 2020’ according to the official blurb) and though it leaves the current run with enough bang for the buck but not the cliffhanger some were expecting, I’ll be perfectly happy to watch it  – but one hopes that what has often felt like a trial-run so far, finally produces some lesson-learning and risk-taking if it’s going to be a significant part of the flagship for Disney+ and Lucasfilm‘s ongoing commitment to the George Lucas galaxy.

There’s potentially a really good show at the heart of The Mandalorian – but so far, we’ve only caught a glimpse. 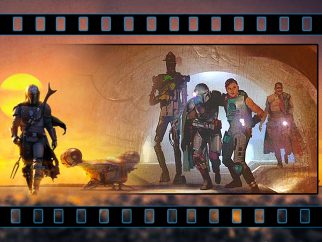