Once again, the Tardis appears to have missed its destination, depositing its ‘fam’ by a beach but certainly not with an intended holiday. It’s 1807 and something appears to be very wrong. The Doctor’s ear-gear is playing up, a small village has just been destroyed and there are flying galleons. It appears that in an effort to find hidden treasure, infamous pirate Madame Ching has unintentionally unleashed a group of Sea Devils upon the world and now unlikely alliances will have to be made to stop the aquatic creatures from transforming the world and flooding its continents…

As the Doctor ponders both the immediate threat and the unease of an uncertain future, it appears time may be running out…

The end is nigh… but the moment is still being prepared for… at least for now. The Legend of the Sea Devils, of course, marks the penultimate adventure for Jodie Whittaker’s fourteenth incarnation of the Doctor and while there’s been much conjecture about the imminent future of the show – outgoing Whittaker and Chibnall’s departure, incoming Russell T. Davies’ plans, future casting and scheduling etc… most of the important details are still under wraps. And so this Easter outing should be judged merely on its own merits rather than constantly looking to that far horizon and undiscovered country – even if that’s realistically impossible given the pan-dimensional hoopla and vortex surrounding it.

The latest special (though one that sticks closer to the more conventional running-time of an episode) brings back the Sea Devils – the classic Doctor Who enemies referenced in the title. Last seen in the Peter Davison era, these ocean-depth creatures were something of a second-tier fan favourite, though unlike the Daleks, Cybermen and Silurians, they’ve never featured in the ‘Nu-Who’ era. While creatures like the Silurians received much better prosthetics with their return, the original Sea Devil design remains mostly intact and inevitably retains that ‘men in rubber suits’ factor that the modern era has largely managed to side-step. VFX efforts add blinking to their wide-eyes, but what little dialogue occurs from them doesn’t have the benefit of a moving mouth (adding to the rather hokey efforts) and was largely added in post-production. It doesn’t help that not a single Sea Devil receives an on-screen name, so we’re largely facing down a crew of one rasping Sea Devil, a couple of background cohorts and briefly-glimpsed silent CGI extras.

The ship backdrop is decent enough, giving a sense of aquatic atmosphere and ocean-going style, but the necessary visual-effects needed to bring it all together encompass the impressive to the clunky. Most of the underwater sequences work well, helped by good choices of colour and lighting and the wider-screen sequences of flying ships make a good visual. (Even the Doctor ponders why the usually submerged Sea Devils need a ship but the answer that it’s a great image to stir their enemies is a more of a meta-answer than intended). Above the surface and the close-up, green-screen efforts somewhat betray the limitations. Sadly that swashbuckling is somewhat lacking too – in an age where we’re used to fast-paced and graceful swordfights, the choreography here is slow and uninspired to the extent you can almost see the actors counting their swishes as they swash.

Character-wise it’s interesting to see the show once again pluck a strong female character from history and highlight her achievements. Though it’s largely a name-only usage in a fantastical situation, the real Madame Ching (played here by Crystal Yu) was, indeed, a real-life mariner who escaped a life of poverty to eventually command a vast fleet of ships and pirates. They are all off-screen in this case as she acts alone, somewhat recklessly to trail an ancient treasure to free them from imprisonment elsewhere. It’s her actions that lead to the Sea Devils return when she unwittingly unleashes their leader imprisoned in a statue, resulting in the death of the local villagers – the only survivor being Ying-Ki (Marlowe Chan-Reeves).

In many important ways, the ‘special’ feels simultaneously ambitious and safe with a reach that quickly exceeds its grasp, a grand and epic idea that would have been hard to pull off on the best of days and felled by recent production restrictions, ultimately coming across at best as a run-of-the-mill Who filler to, at worst, a pantomime Pirates of the Caribbean skit performed by the local am-dram society squeezing every penny out of an inadequate budget. To be fair, some of this was down to COVID restrictions and having limit the cast (something faced by the last special, the far more organically claustrophobic Eve of the Daleks), but with such widescale intentions on show here, it’s simply impossible to do a full-on pirate tale the concept deserves when your crew is essentially a couple of swashbucklers and a handful of props.

Dialogue-wise, the script is pretty light-weight with the best line being ‘No ship, Sherlock!‘.  The main thrust of the Sea Devil plot is non-sensical – a cited reversing of the Earth’s magnetic polessounds hugely dramatic but isn’t: it might cause some havoc amongst birds and animals but would do little to affect the world’s oceans. Far too many connective elements appear to have been thrown overboard along the way, scenes cut or never filmed that were necessary for flow. The Tardis crew step out supposedly expecting a beach holiday and find they’ve once again missed their destination… yet somehow they’re already dressed in era-appropriate traditional eastern attire (except Dan who’s been conned into full on Errol Flynn mode) which suggests an amazing coincidence or lost dialogue/scenes. At one point Madame Ching captures Dan and Ying-Ki at sword-point only for the next scene to have them both strung up – quite an off-screen achievement to manage single-handedly. Later the Doctor and Yaz are essentially captured on the Sea Devil ship before causing some chaos and the next thing we know they’re swinging to join their crew with no real explanation of how they actually got away. Sometimes it feels like the whole episode has been streamlined to its basic elements and stripped for parts.

A possible romantic relationship between the Doctor and Yaz has been all-a-flutter across some parts of fandom – with both positive and negative reactions. Diversity and representation are good, but many also point to the fact that the nature of the main character (and the show) really nix anything too overt. For decades the Doctor was a fairly asexual white man and though Whittaker’s casting was an entirely reasonable narrative choice (if the Doctor comes from a race that can rewrite their genetic code and look like anyone they want regardless of colour, height, weight, appendages etc, there was no logical in-story reason why the Doctor couldn’t appear female… but that’s an eternal argument still being thrashed out between people of different opinions) it doesn’t really change the series’ remit. Strong emotional bonds through the ages were one thing, but actual companion romances were never really endorsed before the modern era and even since the show’s return, any physical intimacy has been doomed because of the show’s nature of regenerating its cast and vibe every few years. Yes, Billie Piper’s Rose fell for the Doctor but got trapped in a parallel universe (getting her own version to love in the end), Jenna Coleman’s Clara had a fluctuating tenure became somewhat toxic and even River Song (who actually married the time-traveller) was a full-on free-spirit equal who could come and go through the era and we (and the Doctor) already knew her fate after her first appearance making it even more tragic. Tennant flirtation with Elisabeth I and Smith’s off-screen dalliance with Marilyn Monroe were essentially little more than punch-lines within bigger stories. Nothing sticks, simply because it can’t. Everything has a time and place, even for a time-traveler – maybe especially for a time-traveller.

So even if a relationship had been a delicately-plotted, respectful, long-evolving, all undeniable chemistry and innate feel-the-electricity between Yaz and the Doctor,  it might still be awkward a story to pull-off knowing you also had to write its ending as quickly as you decided it had a beginning. But Whittaker’s not-you-it’s-me line, claiming that of all the people she’s ever travelled with, Yaz would be the one she’d want to commit to if she was going to do it at all…. feels like, well – let’s be blunt here – pure fan-fic tosh of the highest order, seemingly scripted to accommodate ‘shipping, not to make it make sense.  Its a quiet scene, acted well and the same-sex factor is completely irrelevant… but in nearly sixty years of the show I could list handfuls of companions and even supporting players with whom there’s been more obvious electricity. While Mandip Gill is a decent actor, Yaz herself is the least-likely character for whom the Doctor to get those kinds of feelings: she has been a terribly under-written, inconsistent character  that for much of the first year hung around like a third wheel and was forever getting separated from the Doctor. This was largely down to the unwise expansion of the Tardis ‘fam’ but did the character no favours.  Perhaps, it could be argued, it forced Yaz to be more self-reliant and to see the Doctor as the mentor who enabled that growth, but that’s also the story of many a previous companion. Gill and Whittaker said they played a little to a dynamic between the two characters over the last couple of years but that it wasn’t there in the original script and the eventual on-screen vibe was certainly left ambiguous – still, it’s still a ‘love’ story that now feels forced and inorganic, scripted not co-ordinated in the dying moments of a soon-to-be-gone era. Even with ‘regeneration’ factor not withstanding, the real future for the two characters in a show that will soon exist beyond either of the actors’ participation, is unlikely to work. While it’s hard to know whether Yaz herself is doomed (it appears that both Mandip Gill and John Bishop will be leaving the show as Chibnall departs), the romance certainly is… too little, too late, too bad.

We’re given a teaser for the finale that shows us a returning raft of characters (Tegan! Ace!) and familiar foes and likely set for an October broadcast. Until then, this is an episode that feels like an entry from the 70s or 80s version of Doctor Who that’s been dusted off and given more bells and whistles. Legend of the Sea Devils is purely a lukewarm placeholder that runs shallow not deep and where there’s a lot of running around, a ton of exposition, Whittaker scrunching her face up with a ‘That’s impossible!‘ exclamation and yet everyone and thing reconciled before supper – essentially all the hallmarks of the current era. 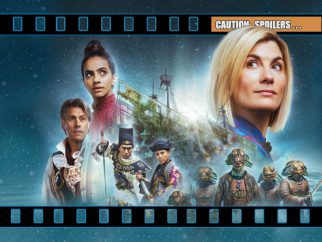