A powerful visit to Picard's mindscape offers clues to his childhood - but once again continuity feels questionable...

As Raffi and Seven realise the danger that Jurati/the Borg Queen could be about to unleash, Jean-Luc is facing his own personal battle. His synthetic body has recovered from Dr Soon’s reckless attempt on his life, but Picard remains unconscious, trapped within his own mind and facing uncomfortable, repressed memories of his turbulent childhood.

As Tallinn attempts to enter his mind and help him escape, it seems those memories reveal a far more complicated truth…

The ‘secret’ at the heart of Picard’s childhood – and the episode largely devoted to it – is a double-edged sword. Practically, it brings much of the season’s main storyline to a screeching halt for the sake of a character-driven deep-dive and however good or bad that diversion is, it’s still a diversion that requires a lot of the ‘high-stakes’ characters to be suddenly missing from the chapter at a key dramatic moment and supporting players given scenes that are fun but brief. Emotionally?  Star Trek: The Next Generation (especially the Family episode) touched on the fact that Jean-Luc’s journey to the stars began without the wholesome support of his family and that there are still some feelings and resentments left unresolved. His father, Maurice, appeared to have been a gruff authoritarian and Jean-Luc’s relationship with his elder brother Robert fared little better as his sibling ultimately resented the fact he had to stay behind to tend the family’s vineyards while Jean-Luc took the skies and beyond. But the latest season of Picard adds more than wrinkles to this.  It initially appeared from trailers and brief flashbacks that we were going to see that Picard’s mother Yvette was a victim of Maurice’s domestic violence, possibly to the point of her being killed, as witnessed but repressed by Jean-Luc. (The situation recalls the modern decision by Marvel Comics addressing such psychological issues with its own characters by putting Bruce Banner in a similar position, establishing the reason that the gamma-explosion that created The Hulk was also tied to that forgotten rage and pain). The images and the fact that Sir Patrick is a well-known advocate for stopping domestic abuse (having experienced it in his own real-life family) seemed to speak to a well-intentioned story addressing the problem.  The main question was, however well-intentioned, how organic this would feel in a finite season with a raft of ‘big’ storylines competing for space.

So it’s interesting that the side-story appears to zig instead of zag inside Picard’s self-analysing dreamscape of knights, queens and a stained-glass window that surely give hints at what’s to come? It is slowly revealed that Picard’s ethereal psychiatrist (played by James Callis, so memorable as the duplicitous Baltar in the Battlestar Galactica revamp) is a manifestation of his father and that Maurice was just as much a victim. The resentment Jean-Luc repressed may well have been the fact that his father was trying to shield him from his mother’s spiraling mental-illness which he saw was already impacting his son in dangerous ways, possibly even putting him in physical danger. Both Callis and Madeline Wise (as Yvette) give nuanced performances amid an almost askew-fairytale slant on the backstory that initially embraces traditional tropes.  Though there are questions deliberately left unanswered, it’s an interesting decision and unexpected pivot that works well enough.

Sir Patrick Stewart, of course, is a master stage-actor and he does more with a furrowed brow and a flick of the eye than many others could do with a whole script. There were key moments during The Next Generation years when he got to flex those muscles beyond the familiar weekly plots and here he brings those years to the fore making even the static talking scenes, among the more chaotic, work.

However once again Picard is a show that wants to symbiotically attach itself to the existing mythology, clutching at it like a treasured heirloom while simply shruggingly contradicting itself when it suits and the quality show sometimes suffers some self-harm with that mixed messaging.  For Monsters to work, you not only have to distance yourself from descriptions and depictions of Picard’s parents to date (which would be do-able in and of itself because we’re talking about people’s perceptions), but from the more concrete fault-line that Picard had that elder brother Robert who is nowhere to be seen here. It’s entirely possible to get a no-prize for hand-waving an explanation why the character might not be present in a specific story – this is after all, a recovered, embellished memory not a true flashback – but for Monsters to work in any profound and meaningful way, Robert has to be so absent that he doesn’t exist at all, otherwise it fundamentally changes every nuance of the family dynamic depicted and might as well be a fanciful fairy-tale. Even a script line explaining his absence would not really have sufficed, but we don’t even get that and long-term Trek fans (to which the season is unashamedly aimed) are left with yet more pretzeling to do on their own time. (Perhaps the show will address this in time – but it will, by then, run the danger of feeling like an afterthought). Add to that Rios handing Teresa a device from the far future and her being able to use it and then making the WTF? decision to beam her and her son aboard the La Sirena, feels like ‘in the moment this would be cool‘ writing that has no real sense of planning or logic attached given what we’ve been told.

Non-continuity or plot-holes are one thing, actual continuity is another. The problem with the touchstones and homages that have appeared in this second run is not any one individual occurrence, but the sheer avalanche of them and by now they are like tribbles – initially cute and endearing but less so as they multiply and distract. There were always going to be inevitable, even welcome nods to The Voyage Home given there were so many narrative parallels, and no-one could really begrudge that. The inclusion of Kirk Thatcher’s ‘punk-on-the-bus’ was a wry, knowing but fun acknowledgement of the material and the loose but important chronology of the era with its growing troubles and social unrest, established in the likes of Deep Space Nine, have worked well.  However this week’s Rios quip ‘I’m from Chile, I only work in outer space‘ (an echo of Captain Kirk’s line about Iowa) is just so on the nose that rather than being quaint it’s an eye-roller, a one-too-many times to the well of nostalgic self-reverence and generating feeling that makes you want to say ‘Yes, we get it, already!‘ Picard has huge potential and innate talent so it shouldn’t have to consistently be a tribute act to itself.

Orla Brady’s Tallinn gets to wander around Jean Luc’s mind palace dungeon, though she’s reduced to being a watcher when its Picard who ultimately does most of the emotional heavy-lifting. Talinn wears a pointy-ear mind-meld device which feels like a nod to her Laris character but with the connection she and Picard share through the experience and the reveal that Tallinn is indeed a secret Romulan (thus establishing a potential genetic connection down the years to Laris) is another head-scratcher on a story-level. There’s really no reason that Tallinn would have hidden that fact from him and the reveal feels like a last-minute ‘given the improbable full-chorus of returning faces we have this season, we better explain it as more than cosmic chance‘ scene.

The show brings back Young Guinan – with a feeling that the landmark character is only being used as a convenient supporting-player to lever or pivot for plot devices that need some hand-waving rather than true explanation. That being said, Ito Aghayere works hard to better match Goldberg’s specific inflections and mannerisms than when we first saw this version of Guinan earlier in the season. We get another on-the-nose visual of Q being summoned like a genie to a bar full of bottles. Even with some cosmic technobabble about how the ‘bottled moment’ works comes across as unnecessarily hokey and is rendered somewhat moot when the FBI shows up to arrest them both in a theatrical way. There’s no sign of Q this week (nor key players like Renee, Kore or Dr Soong) but there’s the ever-growing feeling that Q – portrayed as a villain throughout this season – will not be the ‘Big Bad’ or at least not have wholly-malevolent, out-of-character reasons for the whole concept. Is this just another of his surreal doesn’t-stick teachable-moments for Jean-Luc? Q’s own distress suggests he’s possibly as much in the dark about predestination as anyone, but we’ll see. There’s a brief distraction as we see Alison Pill’s Jurati/Borg hybrid cranking up her endorphins while wandering the city’s bars, but it’s more of a set-up for next week’s episode.

Again, I like Picard‘s second season, a run that has given us some nice ideas, some lovingly directed sequences and some memorable performances from its talented cast. I just wish that the show realised that it can’t find its true potential when it embraces the past one second and dismisses it the next without the seams in this tapestry becoming frayed. Right now it’s paying tribute to its past, but it also needs to start looking forward boldly… 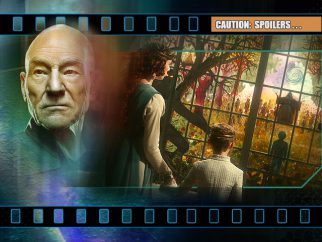