There's a 'Raiders of the Lost Story-Arc' vibe to the latest entry of Disney/Marvel's Moon Knight...

Steven/Marc have found ‘themself’ in Egypt, the spiritual home of the powerful beings that once ruled the land and still linger in its shadows. But as the race continues to find an ancient tomb and release an even older power, it seems that even deities have bureaucracy to overcome. Marc Spector is a man of action but he and Layla may need Steven’s more academic abilities as much as Moon Knight’s fighting skills to help solve the latest riddle of the sands… if they can all survive long enough to do so.

In an episode where Oscar Isaac’s geezer goes to Giza and Moon Knight switches from London to the birthplace of its central mythology, Egypt (actually the ever-reliable Jordon standing in for the ancient iconic surroundings) there’s undeniably a Raiders of the Lost Ark vibe to several sequences and over-all proceedings. There’s not a lot of forward-momentum here regards the story, rather a twisted reply of the preamble in Raiders… where Indy and Marion meet John Rhys Davies’ Sallah before they locate various burial chambers and fully engage the Nazis, but it’s all entertaining enough. Though clearly not onquite as big a cinematic budget, there’s still some considerable work put into world-building with convincing production-design and VFX. It brings with it a different tone – there’s some solid chase-scenes through markets and alleyways and some good direction to keep things both claustrophobic and wide-screen as needed from moment to moment. There’s still a scattershot approach as we switch between viewpoints and the Spector/Grant dynamic, but the palette is a brighter one and it’s clear that the production and genuinely shifted locales rather than simply moved to a differently-decorated sound-stage. In addition, there’s a brief moment where Moon Knight’s cloak forms a crescent moon against the sky that proves iconic and also great scene courtesy of post-production in which the Egyptian night sky races around with majestic star-trails as our heroes attempt to align their map with how the sky looked on a specific night thousands of years ago. There is something quite majestic about the effect and the silhouettes outlined by a dazzling stellar spectacle – it only lasts a short while but does give an impressive sense of scale.

Narrative-wise, it’s also an interesting switch to have the main focus on Marc Spector rather than Stephen Grant, the action-man taking the lead with Grant more of the occasionally glimpsed and unwilling passenger and only briefing coming out to play for the more research and translation services that are needed along the way. Given that this is the fourth episode of only six in the series, it does make one wonder how much of this series is an askew origin story (less, perhaps, about the origin itself and more about setting-up an ongoing status-quo) and how they’re going to play out the idea of a character with associative personality disorder (I, for one, want ‘Steven’ to stick around, though the longer we stay with both Steven and Marc the more their extreme, opposite differences move towards each other and ‘Stephen’ is already less bumbly and vulnerable than he was).

It’s been said before but Oscar Isaac is doing a fine job of moving between personas on a physical and mental way and though proceedings move at such a pace that it can be confusing to work out the exact personality shifts, the moment things calm down, it’s pretty easy to tell who is behind the eyes merely by looking at the gaze and posture. Grant is more hunched and wary but growing in determination while Spector is the figure that moves more elegantly through a fight but wears a scowl of a different hue when the white cowl isn’t hiding his features.  Ethan Hawke’s Harrow remains enigmatic. Yes, he’s obviously unscrupulous and a ‘bad guy’ a broken man of a so-called god… but in a landscape where the hero is fighting for a guy who could be equally flawed and unholy, there’s not a lot of moral high-ground in the underworld. We also get some welcoming background on May Calamawy’s Layla, definitely a lady in the Marion mold, more than able to take care of herself but consistently getting dragged into unexpectedly complicated and dangerous situations by her adventuring soul-mate.

In itself, the godly council meeting  we see in this episode is a nice concept – a olde worlde pyramid  temple with the relevant avatars summoned to a kind of board-meeting and being taken over in turn by their respective ‘masters’ who are only depicted as giant statues and who actually dwell elsewhere.  The MCU treats its so-called ‘deities’ in different ways (Asgardians, Eternals and the upcoming Greek pantheon in Thor: Love and Thunder, etc) and though there’s a sense that the beings aren’t so-much ‘gods’ as diffident ethereal creatures rather bored with humanity, there’s recognisable pettiness and  pompous bureaucratic nonsense that marks them out to be as fallible as any of us (even if it slows down the momentum). Perhaps there could have been more ‘fun’ in the moment (potentially it reminds me, for some reason, of a very under-rated meet-and-mingle between imaginary friends in Drop Dead Fred) as well as drama… and Ethan Hawke’s duplicitous Harrow certainly seems to be more readily believed by the gathered cabal than you’d expect given the stakes involved.

The episode is ultimately dedicated to the late Gaspard Ulliel makes his debut as intermediary Anton Mogart / Midnight Man, essentially a black-market and influential mover-and-shaker who gets between Marc, Layla and Harrow’s forces. France-born Ulliel, who previously played the young Hannibal Lecter in Hannibal Rising (2007) and was the face of Chanel men’s fragrance Bleu de Chanel for twelve years, died in a skiing accident in the Alps in January. He was only 37.

Two episodes to go and the pacing isn’t perfect and won’t suit all –  but there is a sense that Marvel are trying to tell a rather different kind of story and that, in itself, is interesting and worth watching in a year packed with that universe’s output. 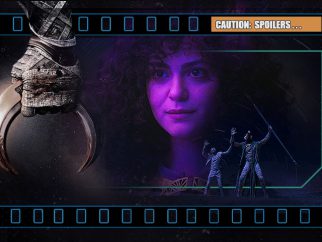