The MCU and 'Mayor of Kingstown' actor remains badly hurt but police have given more details...

>> TUESDAY UPDATE:  Following his New Year’s Day accident (see details below), Jeremy Renner is currently undergoing care in Reno and for the first time since the accident he’s personally reached out via his Instagram to thank everyone for their concern. Still in serious condition, but able to talk and he undergoes treatment, he posted earlier today, shortly after the Washoe County Sheriff’s Office gave some more details about the cause of his injury. It appears that Renner was helping a family member free their car from a deep snow-drift when the Sno-Cat/PistonBully vehicle he was using went awry.

Washoe County Sheriff Darin Balaam explained that the actor got out of the PistenBully to talk to the family member and the machine (which can weigh over 14,000 pounds) started to roll. Renner made an attempt to prevent this by trying to get back on to the driver’s seat but was unsuccessful in retaining control of it. 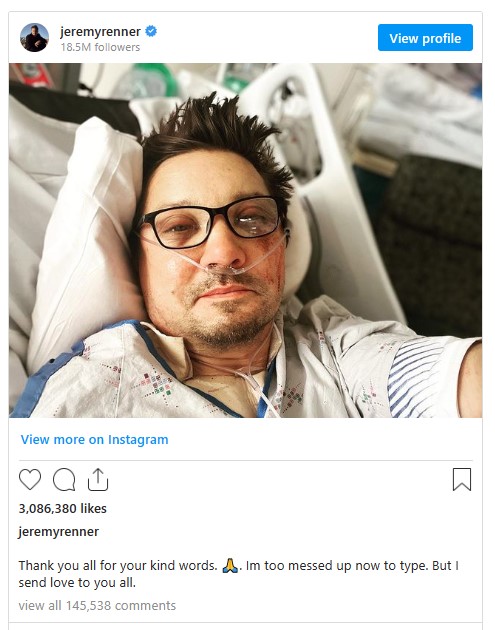 “Based on the investigation, it’s at this point that Mr. Renner is run over by the PistonBully. An eyewitness detailed seeing Mr. Renner getting into the PistonBully, and not seeing him again until the PistonBully came to a rest in a pile of snow in front of his driveway,” Balaam said and noted that there was no suspicion of foul-play or a question over Renner’s state of mind at the time. He also confirmed that the vehicle was being scrutinised by the department to see if a mechanical failure was involved.

>>> PREVIOUS: Following news that Jeremy Renner was seriously injured in an early New Year’s Day accident, his officials have now confirmed some details of the ‘weather-related’ ploughing event. It appears that the actor, best-known for his role as Hawkeye/Clint Barton in the MCU movies and tv series, was flown out by medical helicopter after he sustained his injuries at (or near) his home near Mount Rose Highway in Reno, Nevada. Renner has owned a home in the Washoe County in North Nevada for several years and the area had been hit my deep snowfall over the holiday season with over 30,000 locals apparently hit by power outages.

“Upon arrival, Deputies coordinated with Truckee Meadows Fire Protection District and REMSA Health to arrange for medical transport of Mr. Jeremy Renner via care flight to a local area hospital,” a spokesperson for the Washoe County Sheriff’s Office stated later in the day. “Mr. Renner was the only involved party in the incident.”

Various media reports suggest he sustained at least one very serious injury and blood-loss with an ‘industrial snow removal machine’, running over one of his legs at the scene of the accident  – despite safety features which should have prevented it. (The machine has apparently been taken for examination). Several reports also say that a neighbour with medical training helped in the aftermath and the actor has had to have two surgeries since arriving at the medical facility.

“We can confirm that Jeremy has suffered blunt chest trauma and orthopedic injuries and has undergone surgery today, January 2nd 2023. He has returned from surgery and remains in the intensive care unit in critical but stable condition,” the official statement said. “Jeremy’s family would like to express their gratitude to the incredible doctors and nurses looking after him, Truckee Meadows Fire and Rescue, Washoe County Sheriff, Reno City Mayor Hillary Schieve and the Carano and Murdock families. They are also tremendously overwhelmed and appreciative of the outpouring of love and support from his fans.”

We send our best wishes for a speedy recovery to Jeremy Renner and his family.