It was guaranteed that James Cameron's visuals would impress, but can this sequel na'vigate its narrative?

It’s over ten years since Jake Scully went undercover, taking on the ‘avatar’ from of a member of the Na’vi tribe on the planet of Pandora and ultimately going AWOL from his unit to protect the indigenous tribes from the Earth people determined to steal the planet’s resources. Now with a family of his own and with a tribe to continue to protect, the day Jake feared has come – Earth forces, the ‘sky people’ are back and this time they won’t be driven away.

There’s worse news in that Miles Quaritch, the Earth general that Jake killed in battle, has had a back-up version of himself incorporated into an cloned Na’vi body and he’s personally leading a troop of similarly augmented marines with a mission to find Jake and eliminate any further threats.

Realising that he cannot beat their superior tech and numbers, Jake and his family flee the immediate area and ultimately find a reluctant safe harbour with the Metkayina tribe who live a symbiotic relationship with the marine world around them, slowly adapting to their ways. But ‘Quaritch’ will not relent and soon his personal vendetta of vengeance leads him to Jake’s new home…and he doesn’t seem to care who or what will get caught in the crossfire…

What should have been the last review of 2022 becomes the first of 2023 due to illness and weather – but the main question remains the same: was Avatar: The Way of Water and the re-opening of Pandora’s box-of-delights worth waiting thirteen years and more to see? The answer isn’t a simple one.

A decade is a long time. raising water-level expectations impossibly high and almost guaranteeing quibbles. In that decade, not only have films come a long way in terms of budget and VFX, but so has television, with cable and satellite channels giving their big-screen cousins a run for their money with tentpole titles such as House of the Dragon and The Rings of Power. Also, console-games have been pushing boundaries, only a few footsteps behind the other arms of the entertainment industry and, in some cases, running in tandem. It’s this last category that is particularly relevant. Where once very basic shoot-em ups were the order of the day, more have started to excel at world-building, placing their kinetic tales in expansive, explorable landscapes and populating them with often intricate, detailed mythologies that begged to be explored. Putting aside the technology behind the visuals themselves, Cameron’s remit with The Way of Water (and presumably the sequels still to come), is to do his own world-building. It’s very effective, admirable, efficient and sometimes beautiful on an ethereal level, but it’s not quite as unique and defining as it was even a decade ago. (The likes of Horizon: Forbidden West and God of War (both currently being actively considered as cable shows) have also achieved similar levels in tribal motifs and cultural anthropology). In short what might have been utterly jaw-dropping and another benchmark entry in 2013 becomes ‘merely’ impressive and well-intentioned in 2023.

Ironically, what might have worked better as a signature mini-series given time and pacing to explore the cultures of Pandora, feels slower paced as a film, a production running over three hours and which could likely have told its story in two-thirds of the time. Even die-hard fans will likely leave the cinema pondering aspects of the plot that look pretty but make no sense or seem oblique foreshadowing. Jake’s family are repeatedly captured and escape throughout and Cameron takes his time, ignoring Hollywood formatting and wants us to be invested in both the characters and the planet itself, invoking not only the horrendous way we’ve often treated indigenous people but also the savage disregard of cruelty in the way we hunt our oceans. To that end, while each frame is undoubtedly nice to look at, the narrative of the first half itself feels more like an extraterrestrial travelogue or an edition of NatGeo dedicated to progressive rock albums.

And there’s the real catch: The Way of Water often feels like Cameron – who became famous for carving ground-breaking niches for other lesser directors to emulate and for having his own personal wonderment of the sea’s secrets – just revisiting older territory with a snazzy new art-program. It’s all good…very good in important ways… but full-on, ten-years-in-the-making levels of good? Not really.

The story, also over a decade-on, sees Sam Worthington and Zoe Saldana reprise their roles as Jake and Neytiri, now leaders of the Omaticaya tribe and fighting for their hybrid life and planet. Stephen Lang, as Miles Quaritch, the big-bad of the original and (spoilers) killed in that film’s climax, returns in both flashback and as a conveniently ‘resurrected’ format with a copy of his personality grafted on to a Na’vi body alongside a group of similarly-created marine force. (While Lang’s features flicker through, the appearance is almost Vinnie Jones in snarl and gait). Jake and Neytiri’s four offspring include the adopted Kiri (whose exact origin is a bit – conveniently – mysterious and voiced by Sigourney Weaver but looking more like a smurfed-out Winona Ryder) and Britain Dalton as Lo’ak. Among the beach/sea-dwelling Metkayina tribe are Cliff Curtis (as Tonowari) and Kate Winslet (as his wife Ronal), very much set up as coastal counterparts to our existing power-couple.  Jack Champion as ‘Spider’, the human child adopted by the Na’vi – but whose actual parentage becomes a problem, is a decent bridge between all the other parties. You can also watch out for (or not, as it were) C C H Pounder and Joel David Moore.

But the truth is that with the priority of events over character, however much you’ll likely enjoy them and the story in the moment, one wonders if you’ll be able to remember their names on the drive home rather than just recalling key sequences. The gathered ensemble is impressive, though you’d be pushed to immediately identify them individually without a cast-list given the way that their identities are cloaked under performance-capture – the result being that this is probably the most impressive ‘animated’/CGI film you’ve seen, but without enough live-action to make it feel like the cross-pollination of the first.  At a risk of being inappropriately culturally-clumsy in my wording, the first third of the film gives us a focus on the surviving Na’vi tribe where it’s often hard to distinguish between each lithe, fast moving character as they dash through the deep undergrowth, indiscriminate blue-skin and yellow eyes flashing by at a higher-than-ever (but weirdly shifting) frame-rate. I often found myself wondering which of Jake’s sons was saving each other and it’s not until the middle of the film and beyond, that we settle down into a more manageable core of characters (though, even then, Cameron’s battle-sequences are both wide-screen and scattershot). And while the Na’vi were given a distinct beyond-Earth culture in the first film, more of that cultural uniqueness seems subsumed (or submerged) into familiar contrived convenience as we go on.

Though putting the likes of Wakanda Forever‘s Namor to shame on several levels, Cameron’s own ‘Life Aquatic‘ tale is impassioned but not original. Beyond the overt (if still important) messaging of the film, the tidal swells reveal some pretty standard tropes na’vigated with few surprises: default teenage rebellion, familial and tribal identity, respect for the environment and triumph of the underdog all have their moments and ones that are likely to remind older audiences of Dances with Wolves, Pocohontas, Free Willy and, in many notable ways, the likes of Cameron’s own Aliens, The Abyss and Titanic. And there’s the real catch: The Way of Water often feels like Cameron – who became famous for carving ground-breaking niches for other lesser directors to emulate and for having his own personal wonderment of the sea’s secrets – just revisiting older territory with a snazzy new art-program. It’s all good… very good in important ways… but full-on, ten-years-in-the-making levels of good? Not really.

Ultimately, Cameron provides both ecological environmental commentary and soft-focus whimsy on an epic-level, giving us a PG-13 narrative about the circle of life and death set against Roger Dean-esque panoramas, but constantly aware that the certification restraints stop him never veering into the greater potential darkness of genuine genocidal war.

The anticipation for the film has produced critic-proof levels that one might have predicted and The Way of Water will no doubt surf a box-office wave (already approaching the global $1.5 billion mark and heading towards the $2 billion which its balance-book will need) but it’s not quite the must-see, industry-changing release that it could have been and some wanted. Frame-rates and 3D factors aren’t the ‘big-sell’ they were once marketed to be and strip those away and there’s less to applaud beyond the basics. Thankfully the next Avatar chapter (which Cameron says will go beyond the idea of the Na’vi being the heroic ‘noble savage’ and show some of their negatives… and which will also include yet another elemental wrinkle with an ‘Ash’ race) won’t have a decade with all the weight of water and expectation to act as pros and cons, but it’ll be interesting if its message will still resonate and its formatting will still be a selling point. 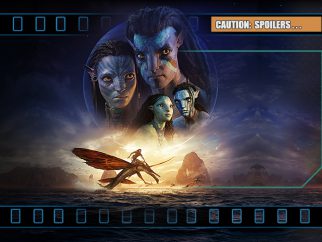