Isle of Intrigue: Benoit Blanc is back on the case, but he should beware Greek-vacationers carrying grifts...

Miles Bron is the king of social media, owning global business empires and enjoying it all, never afraid to go to extremes, knowing he’ll be indulged by all and sundry. But once a year he gathers a small cabal of influencers and associates around him for a weekend of sheer indulgence. The group were all there at the start of Bron’s rise and in some way owe his support of their platforms to his involvement. This year he’s invited his fellow ‘disruptors’ to his Greek isle home for the ultimate murder mystery weekend.

But among the select, elite guests are two unexpected faces. The first is Andi Brand, over whom Bron recently triumphed in a dirty court battle, one that saw her lose any control in the business they started. There was little to no chance of her accepting an invitation, yet here she is. The second is Benoit Blanc – after all, what better way to set out a murder-mystery weekend then having the world’s best detective on-site for the shenanigans?

But were all the invites legitimate and the welcomes sincere? When it becomes clear that there may be a real murder in the elite ‘Glass Onion’ compound, who can peel back the secrets in time?

The original Knives Out mystery, released in 2019, was something of a mixed bag and it seemed that opinion was divided between the extremes of liking and loathing. I found myself somewhere in the middle, liking its Cluedo-like set-up but finding that it could never quite decide whether it was a genuine (if quirky) love-letter to Agatha Christie’s drawing-room investigations or just a satirical send-up. It was actually something of both, which means it ran the risk of short-changing each aspect. By the end it had been a diverting-enough ninety-minutes with a talented cast including Jamie Lee Curtis, Christopher Plummer, Chris Evans, Toni Colette and an early role for Ana de Armas, but didn’t really make a lasting impact, despite that star-power.

And so, we come to a non-sequel sequel. Writer/Director Rian Johnston apparently didn’t want the ‘Knives Out‘ connection to be a formal part of the tile, preferring each of his mysteries featuring Daniel Craig’s Benoit Blanc to stand on their own (his plan is for a trilogy of stories). This second entry, Glass Onion, is considerably broader, wider and flashier in a more nouveau-riche way. While the dysfunctional Thrombey/Drysdale family of Knives Out was old money gone bad, Glass Onion‘s ensemble of suspicious grotesques are more obviously gilded trash from the outset. They are nick-named as social ‘disruptors’ but are merely the kind of fragile, egocentric ‘pyramid-power-on-steroids’ personalities that thrive on ‘influencing’ those who move in lesser social circles, while ignoring the irony of their own weaknesses. It would be easy to say they are exaggerated and extreme versions or real-life counterparts, but looking around the social networks and tweeters of 2022, it might make you question what is satire and what’s actually played down.

Daniel Craig’s choice to follow up his Bond swansong with a completely different kind of character is a savvy one and he revels in his return to the wry, sardonic Blanc, a southern gentleman aching to get back into solving major cases to test his intellect. At times it verges on caricature, but Craig largely keeps it to just the right side of eccentricity. Despite the encouragement of his partner (one of a number of cameos I won’t spoil here, but two other surprise appearances mark the last time two veterans would be on camera) he’s hit a rut and the unexpected opportunity to join an elite gathering for what is clearly more than a conventional murder-mystery party trick re-energises him.

The host of that party is Miles Bron (Edward Norton), an Elon Musk-type of personality with a performance that feels daily more relevant than it might have been intended to be. He’s the kind of figure who has made his name and money by being in the right place at the right time, an ouroboros celebrity feeding on itself to surviv. and whose overt self-centred mission statement is to be so famous that he’s mentioned alongside the Mona Lisa (which he just so happens to have secretly borrowed in a deal with the Louvre so he can show it off to his ‘friends’).

The assembled guests/stars are clearly having fun. Dave Bautista (as Alpha male fitness guru ‘Duke Cody), Madelyn Cline (as his girlfriend Whiskey), Kate Hudson (as vapid social butterfly Birdie Jay), Jessica Henwick as her assistant Peg, Kathryn Hahn (as compromised politician Claire Debella) and Leslie Odom Jr. as tech-expert Lionel Toussaint all swagger along as if the world was their catwalk and stage, but the characters bristle with unspoken resentments. Each of them owes Miles in some way, celebrating him aloud but quietly knowing the price they’ve paid. In a recent court-battle they all backed up Miles’ version of events against his company’s co-founder Andi Brand (Janelle Monáe) but when she’s invited to the current soiree, they’re all mystified about her acceptance of the invite and her presence.

Johnston has some signature moves with the camera, sometimes obscuring important details and sometimes making sure they are there – just so the film can point them out later (if you watch on Netflix, you can double-check these finer details). The locations are just as glamorous as the cast. Some of the scenes in the film were shot around the harbour of Greek isle Spetses, (and though it’s changed a little since I spent some time there in my youth, there are enough familiar touchstones to invoke both nostalgia and a touch of jealousy over the warm, luxurious climate). The actual Bron compound is a grand, architectural warren of excess and an Aladdin’s Cave of bling and almost a character unto itself.

Flash and brash though its central-pillar may be, the supporting structure of the story works pretty well, with mid-film events meaning the story doubles back to earlier scenes, sometimes reinforcing what we have seen and sometimes dismantling it completely… but doing so in a way that echoes the peeling back of its titular, many-layered food and actually makes sense, within the heightened internal-logic of it all. Unless you’ve been spoiled for its reveals in advance, it’s unlikely you’ll guess them ahead of time, but they make sense by the time we’re done. Some of the banter and asides are predictable, the twists far less so.

Glass Onion is arguably another outing likely to get different reactions depending on your expectations, but it feels more satisfying on a guilty-pleasure level than its predecessor, a more overt and unapologetic critique of just how loathsome and empty people can be and how delightful it can be to see them humbled. By the movie’s end, it’s at the very least been a fun and audacious ride… and with Blanc’s observation that: “It’s a dangerous thing to mistake speaking without thought as speaking the truth…” we may also have the ultimate signature sign-off quote for the sum of 2022. 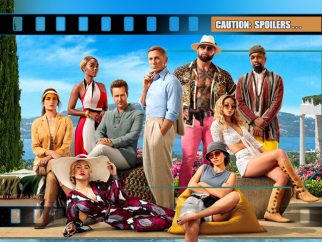