Further conspiratorial revelations are on hold as Ben turns bodyguard to avert a musical murder...

It’s 1979 and Ben has made to the leap into Jack Armstrong, a bodyguard to pop star Carly Farmer whose tour has reached Chicago. Addison, still reeling from Ben saying he’s convinced he originally made his initial Leap to save his fiancee from some future fate, has to put aside her personal frustrations to explain that Ben has made the Leap to save Carly from being murdered by the songstrel’s junkie sister, Jamie. Even though Ben saves Carly from a suspiciously defective falling stage-light, he’s not entirely convinced that Jamie is the one behind the attacks, especially when the sibling turns up claiming to have successfully gone through rehab.

However, if it isn’t Jamie, then who has been sending the threatening letters that have kept the sisters apart… and is it the same person who now seems hell-bent on killing Carly?

Meanwhile, back in the present, the Project personnel look for a way to turn the tables on Janis Calavicci and finally track her down…

Quantum Leap returned for its first episode of 2023 for a story that was set in 1979, but with the exception of some fashion statements could largely have been set in any time period, mostly relating the problem of Ben trying to identify the potential killer of a pop-star. The format and style invoke the stories from the original series which means we’re no pushign any contemporary story-tellign boundaries, but for the first episode back doesn’t actually do it any harm.

Ben is a bodyguard to a pop star, trying to work out why every time he saves her, there’s another threat on the horizon – and all the while searching his own memory for clues as to why he originally made a Quantum Leap.

Deborah Ann Woll made a significant impact as Karen Page in the Netflix-era of Daredevil (Will she back for the Disney+ version? At this point it doesn’t look likely, which is a real shame). Here, there’s a little less for her to get her teeth into, but she does well as a starlet – Carly Farmer – who’s riding high in her career but still has familial baggage to deal with.  Farmer’s a nice person, treating everyone she works with pretty well and troubled by the fact that her estranged, junkie sister seems resentful of her success. Carly’s so nice that one wondered if the episode was going to cynically pivot to darker aspects, but it quickly becomes apparent that she’s the genuine article and that her sister Jamie – who was charged with killing her in the original timeline – is genuinely on the road to recovery. So, we have to wonder who has been sending Carly the threatening letters, supposedly from Jamie. It appears obvious that manager Trevor is involved but is he the one making the murder attempts?  Given the persistence of those attempts it’s a plot convenience that Trevor himself doesn’t realise that it has to be the only other person who knows about his duplicity – a fact that the episode conveniently doesn’t reveal until the third act and – yes – it’s backing singer Loretta who for some reason is jealous of Carly’s success. As mysteries go, it’s a bit of a disappointment but as a template episode it paces itself well enough to be diverting.

The lack of communication between the people of 1979 echoes the frustration felt by the pro-active and independent Addison, now knowing that Ben’s Leap was tied to ‘saving’ her and yet he did so without telling her why and now can’t remember.

The show’s tracking of its contemporary problem – Janis Calavicci’s involvement in Ben’s original jump and her infiltration of the Project’s systems continues – but it’s starting to feel a bit drawn out. Janis has seemed to come and go as she pleases, flitting in and out of the narrative leaving crumbs of developments, but largely being kept as catnip for those who want bigger revelations. So far we’ve seen her operating from her mother’s basement, what appears to be a make-shift imaging chamber and now quite happily sitting at a beach-bar in Belize. Jen’s finally caught up with her and after some small-talk and despite extradition technicalities, Janis is escorted back ‘home’ to answer some questions. Will she actually answer them?

The biggie is why Ben and Janis were working together in the first place rather than with the Project’s team, which in most scenarios would make more sense. The only real answer has to be that the fate from which Ben is trying to save Addison (in her future) directly involves the Project or someone at it – meaning that despite the risks and recklessness of Leaping back into history, Ben must have felt he couldn’t go through normal channels to prevent it. If he originally knew the specifics before his Swiss-cheesed brain took over, then he would surely have left clearer information to aid himself – unless he couldn’t risk that. Given the only message he left behind avoided every conceivable specific, it looks like there had to be wrinkles. Will the captured Janis (possibly exactly where she wants to be) give up the secrets now and how much does she actually know (more than us, but…) As Jen points out: it’s unlikely Janis, likely still bruised by not being included in her father’s legacy, would go to so much trouble just to save Addison, a woman she doesn’t really know, so there’s a bigger and more expansive problem that’s clearly in the works. The question will be whether the Quantum Leap writing team have all those answers nailed down or whether they’re making this up as they go along and filtering it slowly into the episodes so that they can delay having to decide. The recent confirmation of a second run suggests they’ll want to both consolidate those elements but also spool them out, but despite the show they’ve got to find time to answer stuff for the audience who may tire of the bread crumbs.

Despite its setting, the 1979 pop scene is a little to clean and pleasant (and one suspects that recovering addict wouldn’t be too safe there in reality) and despite the title, there’s no new news on any other Leapers… but  Fellow Travelers being the ninth episode of the new NBC run, we’re now about to enter the second half of the season and the show, successful as it is, will have to start having genuine momentum and change rather than just the illusion of them. 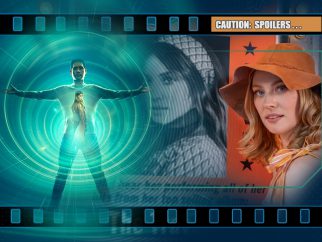