Legal dramas are nothing new, but Netflix's South Korean import about an autistic attorney plays it smart...

A legal procedural is nothing new on the schedules and it’s equally true that South Korea has seen a surge in shows that have achieved global appeal (Think The Squid Game as a recent example). Putting those two factors together  might sound like a financial no-brainer, but the recent import of Extraordinary Attorney Woo provides a lot more – something that’s quirky, entertaining but also something different with something to say about the way we judge each other… (and a lot less bloody violence).

Those with a better understanding of the Autism spectrum will point out – correctly – that it’s easier to make a procedural around a individual’s quirky dysfunction than would be about the vast majority of those with autism (who would likely not fit in to such a drama as well) and that points to the balance between entertainment and character-study. This, to be clear, isn’t a documentary and never pretends to be, it’s a legal procedural… but it does take its central conceit seriously enough to have done the research, approach the subject-matter with care and – most importantly – make its audience care.

The subject-matter is a perilous one, so easy to get wrong to the level of being seen as casually or even deliberately offensive. Autism has such a wide spectrum that it’s often misunderstood and even with the best of intentions somewhat hard to show in a way that encompasses rather than excludes.  In South Korea, it’s often considered as something shameful and to hide away (and the domestic reaction, while been a decent ratings-winner has been controversial there). Though one could argue western cultures are ahead on representation, though there’s still opportunities to fumble the subject-matter, treating any condition as a comedic, quirky crutch on which the story can lean, rather than a new lens through which to tell that story. (It’s no surprise then, that an American remake is under serious consideration and the series core values could ensure that such a translation could work with minor tweaks, though one wonders if it would lose some of its innate charm in the process).

Going in to the first episode, the series doesn’t so much defy expectations as play them out with enough charm to keep you watching and before you know it the series has hooked you in and in doing so, it quickly flexes its muscles to make you do more than just smile. What could have been a ‘Monk‘ (or any number of outings that deal with a hero who has a ‘disability’ that, in fact, makes them superior in some ways), the concept has more in common with that late Noughties NBC show Eli Stone (in which the titular lawyer, played by Johnny Lee Miller, suffers an embolism that pivots his subsequent weekly cases and relationships into surreal territory). Yet Extraordinary Attorney Woo deals with the less palatable misconceptions about the condition and doesn’t always shirk the consequences. It recognises the innate  ‘fish out of water‘ opportunities, but in embracing her quirks, the show itself never mocks nor uses them as prat-falls, rather having the wry smiles coming from the way others constantly underestimate her. But – smartly – the show also pivots into the more serious flipside of that balance. Young Woo finds herself  being framed in certain ways by her ultimately kindly colleagues and also by her less forgiving opposition:  her new bosses are initially reluctant to hire her and when they do and embrace her presence, she is self-aware enough to note that she’s the quirky oddity of the team and sometimes the target of unknowing social condescension – and sometimes deliberate and quite nasty attitudes in the courtroom. Woo may be an ‘innocent’ in some ways, but knows the upside and downside of her autism – the clarity of her mind and the lack of etiquettes are part of her daily routine. She may not handle the connective tissue of interaction well, but she’s aware of it and only a few episodes in, after a series of pretty brutal interactions, she considers quitting… realising she’s been hurt by the way she’s been used by both sides.

Young Woo’s motif  is whales, often being able to use them as touchstone to both solve cases and just make human connections (she could talk your ear off about leviathans all day). On a visual level, the show often introduces them as background effects, sometimes obviously, sometimes more subtlely and it’s a tribute that they come across as thought-processes-made-real rather than post-production VFX.

Eun-bin Park gives Woo a sense of both awkwardness and innocence in both gait and voice, but it’s the way she personifies the lack of guile – the character rarely looking anyone in the eye but seeing so much more than most. Her supporting cast includes Tae-oh Kang as Lee Jun–ho (the fellow lawyer who genuinely has her best interests at heart and, for a while, an unspoken attraction that even he isn’t sure about), Kang Ki-young as understanding boss Jung Myeong-seok and Jeon Bae-soo as her long-suffering but loving father Woo Gwang-ho.

Though the episodes all work within the South Korean legal system, there’s enough familiar aspects to make sense to international viewers and many of the loopholes and legal strategies Young Woo interprets make a great deal of sense.

There are sixteen episodes available on Netflix and a second season has been greenlighted in South Korea, so there should be another run to watch, possibly before the end of the year. 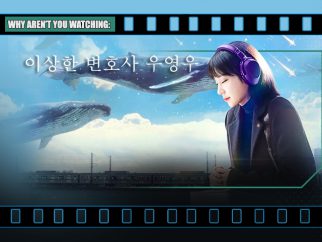 ‘Quantum Leap-ER’: Ben has to plan a triple surgical strike…