As adversaries hone in on them, Clint begins to realise that Kate could be in as much danger with him as without him...

Caught accessing Eleanor Bishop’s computer, Clint and Kate have to endure an awkward family meeting, even though it confirms some of their suspicions. But Eleanor isn’t backwards at coming forwards when it comes to the safety of her daughter and reminds Clint, if he needs it, that bad things can happen when people hang around with ‘superheroes’ – and she doesn’t want Kate to be more collateral damage.

Clint needs to keep investigating and clearing up the mess Ronin left behind, but promises to keep Kate safe. Kate, on the other hand, is determined to keep herself involved… and to make sure Clint doesn’t feel alone during the holidays.

That may be the least of their seasonal problems as the duo find themselves confronting separate foes, neither of whom have the heroes’ continued good health as a priority…

While not being as pitch-perfectly balanced as last week’s faster-paced outing, this week’s slightly more sedate entry still retains all the right ingredients – the swings between banter/comedy and more deep, emotional resonance are more overt but still work well enough now that we’re fully engaged with the characters.

The whole episode – from Eleanor Bishop’s unsubtle (but not entirely inaccurate) comments on Clint’s track record of losing people close to him… thus making him a potential risk Kate’s welfare… to Barton’s own musings on how many regrets he has about the things he’s been hired to do and the actions taken over the years – means that a lot of the important scenes are far from a joke fest and do create palpable tensions. The best-pitched scenes are, again, those with emotional, human beats. Kate not wanting Clint to spend any time of the run-up to Christmas alone and turning up with decorations is another well-pitched personal moment, though her inevitably working out Clint was also Ronin at one point doesn’t seem to dent any of her hero-worship in the way one might have expected. The return of the LARPers is mostly played for laughs (who are a little too easily-convinced by Kate and, if not important, seems like hogging a little too much of the valuable screen-time) but amid the central column of expected chemistry and banter (which Renner and Steinfeld have already perfected) there’s more of a lean towards darker emotions and potential consequences, with the humour as punctuation.

Fresh from the end of Black Widow, Natasha’s sister Yelena (Florence Pugh), wrongly directed by Julia Louis Dreyfus’ Valentina into believing Clint was responsible for Nat’s death, finally arrives.  Those who were aware of the series’ plans in advance will have quickly realised who was assailing Hawkeye before her face was revealed… and the fact she’s wearing a mask at all feels like part of the orchestrated *shock reveal* that likely surprised few. But that arrival also confirms some of the tonal shift. Renner sells the PTSD of Barton’s situation well and here we see that Clint may not know the specific reasons for Yelena’s attack but he does know the implications of having both an enthusiastic but naive amateur like Kate and a ruthless ‘Black Widow’ graduate like Yelena on the same rooftop and the life-and-death stakes created. He understandably sheds any sign of the tolerant and sardonic demeanor and immediately wants Kate as far away from danger as possible. That she’s shoved from the rooftop in a moment that echoes Natasha’s fatal fall (though Kate’s saved by well-placed Christmas decorations) underlines the dangers even more clearly.

Linda Cardellini, as Clint’s wife Laura, makes quite an impression, even in a phone-call situation. In the Avengers feature films and the Hawkeye episodes to date, she’s been portrayed as the loving and understanding wife with whom he can relax and be someone other than an Avenger or operative. But while the ease in which they slip in to coded messaging and intelligence-gathering in this episode speaks to a close understanding of each other, it also strongly hints at something more overtly pragmatic, to the extent that the importance of the watch and to someone’s ‘cover’ may relate to Laura herself and it wouldn’t be much of a surprise if the series gives Cardinelli and her character more to do and a ‘past’ of her own.

Most Marvel/Disney+ shows have suffered from ultimately feeling like lengthy, sometimes meandering introductory set-ups for other projects down the line. So far Hawkeye‘s momentum has been much better, but with the introduction of Yelena to the bustling series-equation, it does make one wonder how the final two episodes will play out in balanced content. Last week spent a lot of time establishing Echo/Maya’s backstory as an adversary and making us wonder about her affiliations…but a lot of that is put aside as Hawkeye and Kate search for a stolen Avengers-Compound watch to which Hawkeye assigns great importance. Though Echo makes an appearance and fights with Kate, there’s only a couple of scenes and lip-service paid to the established machinations of the Tracksuit Mafia and otherwise this often feels like a mid-story diversion and pause. Yelena, the Ronin situation, the Tracksuit Mafia, the exact agenda of Tony Dalton’s Jack Duquesne (becoming more awkwardly-charming but in a subversive way), the possible appearance of the Kingpin (can we hope, I think we can!) and the safety of Clint’s family seems like an awful lot to juggle and service in the remaining ninety minutes if some aren’t merely seeds for the future.

Still proving the most accessible Marvel/Disney+ series so far, this might be a show that benefits from binge-watching – its six-episodes-and-out format and seasonal decorations making it ideal for a straight-through rerun betwixt Christmas and New Year, but as a lead up to the actual holidays, Hawkeye is delivering well. 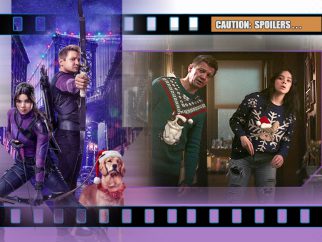 Flux-Capacity: No Big Bang just a whimper as messy ‘Who’ mini ends…