Tilly faces a do-or-die emergency while Burnham has to demonstrate diplomacy....

Michael and Saru are summoned to a high-level security meeting between the Vulcans and the Federation where a last minute wrinkle threatens to loosen the ties rather than bind the alliance. Federation President Laira Rillak (Chelah Horsdal) quietly believes that the Discovery captains might be in a unique position to go through unconventional means to get things back on track.

Meanwhile Tilly and Adira take part in a training exercise that ends up being a fight for life after their ship crash-lands on a barren moon with a squad of new cadets. Can Tilly summon up her skills to get the cadets to work as a unit or will she have to forego her own future to make sure they get home?

A little like Doctor Who‘s recent run, that big, rampaging cosmic storm of a story-arc is largely kept away and mentioned in abstract terms for the sake of an emphasis on standalone side-stories… Tilly’s planetoid story and Burnham’s high-level mediating. In many ways, All is Possible offers an episode that feels more like TOS (The Original Series) with touches of TNG (The Next Generation) in theme and structure – a battle for survival against the environment / a monster on a planet coupled with some ship-bound diplomatic efforts… and on that level this is a perfectly serviceable outing. But this is a show that despite its myriad strengths and all-things-being-possible, always seems just a little bit adrift, pivoting on a whim and yet not gaining momentum. It remains watchable, legacy sf, but still not the ‘must-see‘ tv it yearns to be.

The rather sudden exit of Tilly does come as a surprise. The capable but socially-awkward character was designed to stay just the endearing side of annoying and for the most part that works okay – not everyone has to be an always- in-command structured Star Fleet officer, though your mileage may vary – and the positives are largely down to the efforts of Mary Wiseman. In an ensemble of characters very much driven by duty, she’s the most ‘everyman’ of the bunch, even if the script can tilt into that too much in stereotypical ways. If you’d heard even a whisper about a major cast member leaving the show in the last week or so (and there were comments which suggested such), then you might have thought for one moment that they were going to kill off Tilly by having her save those cadets under her command at the expense of her own life (which she was prepared to do). That would have been a genuine shock, but Tilly’s decision to move off Discovery and into a teaching position at the new academy (so she can likely recur from time to time), seems rather abstract and awkward. For the last couple of episodes Tilly’s suddenly spoken about her restlessness, but it all feels a little shoe-horned in on a narrative level, another example of sudden and inorganic lateral moves for characters into new positions and actually – in this case – as if the actor themselves had needed to exit.  Fans should relax a little, though, despite Wiseman heading off to Off-Broadway for a stage role, Trek’s TPTB have said this won’t be the last time we see Wiseman and Tilly this season, so there may be other things in the works.  The ‘awkward / trying to prove yourself‘ template will now likely be fully filled by Blu del Barrio’s Adira.

It will be interesting to see what the show does with Ian Alexander’s Gray Tal. While certainly being a high-profile positive for diversity (the actor and the character both being gender-neutral), Gray has essentially been Adira’s plus-one since their introduction, the somewhat ethereal presence that’s offered advice and positive reinforcement but without a story of their own independent of that symbiotic relationship. Newly ‘physical’ (albeit in a Picardesque synthetic body designed to look like Gray in his previous form), we really don’t see much of them this episode except a new hairstyle and acknowledging that Gray’s going to have to do some socialising aboard the ship now that they’re corporeal. Gender transition may have topicality, but one hopes the basic ebb-and-flow of the Gray/Adira evolving relationship will encourage stories beyond that touchstone and be as much about finding your own identity and presence beyond a partner in all ways.

The idea that Michael Burnham might be a diplomatic wiz is another unlikely shift for the episode’s sake. Last week she took all of a few minutes to feel her way through alien-tech and solve a technological problem that had been stumping a savvy Vulcan mind for months and this week she steps in with Saru to mediate a highest-level meeting, ultimately ironing out a rather contrived wrinkle that two presidents couldn’t fix. It’s not that the walk-and-talk-aspects of such aren’t okay in the moment – Burnham is clearly resourceful and it’s nice that she is given a break from being in the midst of the more conventional action – but it’s once again an outing that’s positively shouting ‘How great is that Michael Burnham, eh?‘ Now, if such an episode has happened on the way to her becoming captain and as part of her maturing and as a learning curve it might have been different, but now – it’s a little less convincing. A captain has to have an array of talents (diplomatic and strategic) and it could be a case that Discovery is executing a remit of belatedly building Michael up for even more important tasks ™ but it currently feels like the show could easily and quickly pivot back to ‘reckless captain on the bridge’ motif without actual ‘growth’ should the story want that.

Again, there’s nothing ‘wrong’ here – it’s all decent. There’s even David Cronenberg… though he’s not given much to do. But this isn’t a series – despite its remit – going boldly. It’s a series giving speeches about going boldly then randomly exploring rather familiar territories instead. 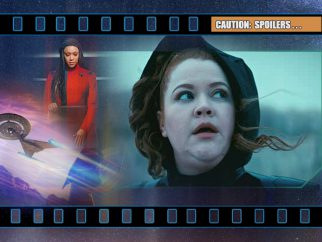