Connelly once again shuffles the status-quo of his characters in a novel that feels very much like a transitional tale...

With Renée Ballard now heading up a newly-formed cold-case unit – a result of being able to choose her next position (after events in The Dark Hours) – she assembles her team of experts, almost all of them having had police positions at some point but are now private citizens… which, of course, includes Hieronymus ‘Harry’ Bosch. He’s somewhat reluctant to join, now preferring the freedoms that a civilian life gives for not always following department rules but Renee promises that in return for helping her solve a designated case he can also look into his own ‘white whale’ case, an unresolved and particularly brutal murder of an entire family years before.

The main ‘official’ case involves the murder of a young woman, perhaps linked to political campaign many years before…. can Bosch’s fresh-eyes spot a new clue and if so, will proving the culprit enhance or doom the department?

And given Harry’s very personal mission, what does Bosch’s own future look like, inside or outside the department?

It’s a good time to be Michael Connelly. After seven critically-well-received seasons of Bosch, a first season of its encore Bosch: Legacy transferred to freevee and quickly secured itself a second season next year. Simultaneously, Netflix released its own adaptation of one of Connelly’s other creations, The Lincoln Lawyer, and it too got an order to continue for another run next year.  Surely it can only be a matter of time before other characters, such as Void Moon‘s cat-burglar Cassie Black or Fair Warning‘s Jack McEvoy get the screen treatment?

But Connelly’s foundational success has always been with his novels, procedurals penned with his deep knowledge of the many facets of the justice system, stemming from his days as a crime reporter and until recently often alternating between opportunistic but savvy lawyer Mickey Haller or the more grizzled veteran insight of retired detective Hieronymus himself.  In what’s clearly a transitional time on many levels, it seems the days of solo Bosch novels are likely something of the past, with Connelly noting Bosch’s age more and more and usually teaming him with a relatively new character, the fresher, younger detective Rene Ballard (even the covers co-credit her and put her name first). Several recent novels concentrate on the trials and tribulations of her career with Bosch sometimes there as a sounding-board and prestige decoration. The police stories are also taking note of the frakked landscape changes of recent years, both in attitude and practical ways. The legacy of George Floyd’s death on the public’s perception of the police and the practical problems of COVID remain factors that are interweaved into the narratives.

The main thrust of the novel is Renée Ballard’s offer to Bosch to join her newly-commissioned Open-Unsolved Unit. (The book refers to the shelves of unsolved cold cases as a ‘Library of Lost Souls’ – which might even have made a more dynamic title for the book). It somewhat up-ends the cautious, sometimes even bristly relationship between Ballard and Bosch with her now very much half his age, intuitive and brave but less experienced… yet very much his boss. Connelly doesn’t dust over that change, exploring how both characters chart the ebb-and-flow of that situation. The main case Ballard’s team is working on involves the death of Sarah Pearlman, the sister of an influential councilman, the man who has championed the unit’s funding but who now wants to see results for that investment. Ballard hopes that Bosch’s critical eye might find a follow-up to something the original investigation missed and true to form he approaches the case from a fresher perspective and does indeed spot something that may lead the team towards more information. However, when it becomes apparent that some of the new evidence may bring that councilman’s own campaign under scrutiny, it becomes a tightrope between results and perhaps being shut down quickly and permanently if they get things wrong.

Though Bosch is certainly more of a presence than in recent tomes, it’s interesting – and perhaps a tad frustrating – that the case he personally brings to the equation still feels like the lesser of the two main cases that the book follows, especially so as it plays into the title of the book itself, indicating it might have been originally intended as the main trunk. (The ‘Desert Star‘ is a sturdy plant that manages to survive in acrid conditions and, here, marks the place the bodies of an entire family were found). The case of the Gallagher family  – a mother, father and two children who disappeared from their home one night and whose bodies were later discovered out in the desert, killed in seemingly brutal fashion, is understandably one that Bosch wants to solve.  He’s had his suspicions about the absent culprit and the motive during his years on the force, but never had enough proof to actively pursue. That pursuit filters through the pages as Bosch makes time for it amid the needs of his ‘official’ case on the squad. But while it’s interesting, it never quite has the sheer urgency that a personal ‘white whale’ case (a la the obsession in Moby Dick) should have if we believe it’s haunted Harry for so long. (Given the length of Bosch’s career, the Gallagher incident is pretty recent, even within the fictional confines of the Connellyverse timeline and it might have worked better if seeds had been planted through the years, giving it true franchise importance rather than feeling like a new, imported factor). It feels like it’s a story worthy of a full novel alone and here we’re getting the highlights. However, it’s not until the end of the main case and the last chapter or so of the book that Harry’s story goes into overdrive that physically and emotionally distances itself from the Pearlman resolution. The Gallagher aspect barrels into a profound event and a personal revelation that brings Harry’s motivations into clearer focus. Even then, despite its importance and the revelation of why it’s important to Harry now, it still feels more like an epilogue to the book’s story than the climax it deserves and – personally – I wasn’t sold on Harry’s actions given their impact on his family and friends.

Without revealing too much of how things do end up, the end of the book still has elements in play that underline Connelly’s tendency to not to have any part of the status-quo fully nailed down, but rather have them (and the characters themselves) always in motion. With The Desert Star it feels like Connelly has decided to go about closing one door and opening another and only time will tell how well that process goes…

That being said, Michael Connelly’s writing and examination of police procedure is still as strong as ever. Connelly’s books are always a superior read and an insight into the changing world of the LA police and the city they serve. The novels remain as essential to crime-fiction readers as they ever were.

Desert Star, by Michael Connelly, is published by Orion and is available from 8th November… 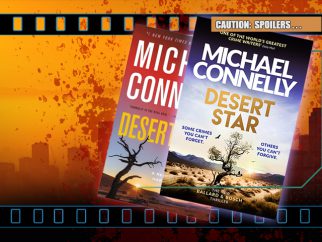