All that (and) jazz… Bosch’s ‘Legacy’ endures on FreeVee…

Michael Connelly's Harry Bosch gets a lease of life outside the force with the 'sequel' series on 'FreeVee'...

Harry Bosch has left the police-force, but his commitment to justice is still an ongoing mission. When Carl Rogers (the businessman who threatened him, Maddie and hired a hitman to kill Honey Chandler) escapes prosecution, Bosch and Chandler combine their resources and skills to bring him down. But without a badge, Bosch will have to channel those skills in a different way and with less help. But perhaps he can rally some old friends?

There’s a blue line separating Bosch and Bosch: Legacy, sometimes thin and sometimes broader, but if there wasn’t a new platform logo and a different set of opening titles and music, then for all intents and purposes it would be difficult to see Legacy (now on the rebranded FreeVee) as a wholly separate entity from the full-on Bosch series that ran for seven seasons on Amazon Prime. Fans can rest assured in a real sense of continuity:  the likes of  LT Grace Billets and Jerry Edgar are no longer regulars but the same three main faces (Titus Welliver in the title role, Mimi Rogers as lawyer Honey ‘Money’ Chandler and Madison Lintz as Maddie Bosch… not to mention the faithful ‘Coltrane’) are still here as is the glass-fronted house on the hill (admittedly the worse for wear because of an earthquake). Also watch out for some welcome ‘Crate’ and ‘Barrel’ back-up. The clues to the shift are there in the focus: Bosch isn’t hanging out with fellow cops any more and his methods are less by-the-book as he’s now out on his own without a bonafide badge and that brings him into conflict with the department…

Maddie Bosch’s ‘boot’ camp to be a street officer largely fills some of that precinct and procedural gap as she struggles in the face of hard-nosed trainers and still not entirely sure if she’s chosen the right profession. AS the title also suggests, it’s something of a ‘legacy’ decision, following both into the law-enforcement profession because of her desire to make a difference. Lintz has grown up on the series and while she’s always been a calming influence on her father, it’s interesting to see her on the front-line.  It’s one of the differences from the novels, some driven by creative choices, some by necessity.

The season has several arcs, one main investigation based and inspired by Connelly’s novel The Wrong Side of Goodbye. Given the time passed, we know that Bosch didn’t serve in Vietnam (as he did in the books), but in the Iraq War – though Vietnam does come into play during Bosch’s investigation into the legacy (there it is again!) that ailing billionaire Whitney Vance (William Devane) wants to clarify and which strikes a chord with Bosch because of his foster-care upbringing.

Titus Welliver has made Bosch his own and though he could probably walk the beat in his sleep, he’s still bringing everything to the role, inhabiting the skin of a detective who may have given up the job he loves but not the mission itself. Bosch still lives and works by the code of ‘Everybody Matters or Nobody Matters‘ and Welliver convinces with equal flashes of world-weary doggedness and a primal sense that justice must prevail.

Mimi Rogers clearly continues to enjoy a role that allows her to be principled but with a less strict code than Bosch. Rogers allows her character to deviate from the glamorous lawyer stereotype – she’s still stylish and dynamic but lets Chandler feel and look just a little world-weary. Carl Rogers (Michael Rose) may have tried to kill Maddie Bosch, but he was the guy behind the shooter that left Chandler bleeding on the floor and near to death… a crime from which she’s clearly not fully-recovered, at least emotionally. Bosch has his obvious reasons for bringing Rogers to justice  (anyone who tries to hurt him or his daughter is clearly going to pay the price) but Chandler’s mission is more primal… she’s using the law but dreams of a more violent retribution.

Watching Maddie go through her ‘boot’ duties is interesting – watching a member of the ‘Bosch’ family who shares a vision about justice but for whom the ‘mission’ has barely begun. This isn’t a seasoned law-enforcer, merely someone who wants to make a difference and it will be interesting if Maddie overcomes the early obstacles and events that could ultimately change her mind.

It’s not that Legacy breaks new ground – there are plenty of shows over the years that have covered similar territory – but it does so with the authenticity and attitude that Michael Connelly, an ex-crime reporter, brought to the printed page of his best-selling novels. Many hit non-network shows do one of two things: releasing all episodes on one binge-worthy go or on a weekly basis. In a smart hybrid move that could well end up being copied elsewhere, FreeVee is releasing the series in a staggered fashion. The first four episodes dropped on 6th May and the rest of the ten-episode run will be delivered with two chapters every Friday.

We’re also getting Netflix‘s adaptation of The Lincoln Lawyer books… so it’s a good time to be a Connelly fan, though one wonders if the hybrid-feed for Bosch: Legacy and the all-at-once Netflix format for The Lincoln Lawyer released almost-together may leave fans trying to keep track of dueling procedures. 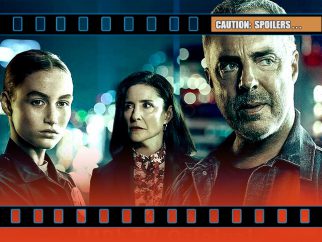