Horror-tinged action and fun cameos, but out-sourced 'Strange' sequel sprawls rather than soars...

Doctor Strange dreams of accompanying a young girl through a swirling vortex in search of the Book of the Vishanti. But though it feels real, the book is a myth and this version of Strange seems far more ruthless, willing to kill the girl and take her powers to protect reality. When our Doctor Strange wakes up he’s unnerved by the experience and even more so later that day when he sees the girl in the street, seemingly the target for a pursuing monster.

He learns that the girl is America Chavez, a girl that has the unpredictable ability to skip through the multiverse and that before her arrival in the main MCU (designated 616) she experienced the events of Strange’s dream. Given his recent experience with the multiverse helping Spider-man, Strange seeks out someone whose magics might be more specific to the idea of the multiverse… Wanda Maximoff who has isolated herself after her own abilities fluctuated in the town of Westview and she ‘lost’ the children she created.

Wanda volunteers to help Strange and expresses sympathy for America.

It’s easy to see why the new Marvel movie, Doctor Strange in the Multiverse of Madness, is getting mixed reviews. In many ways it tries to be all things and while never reaching the emotional landscape of Avengers: Endgame (which, for me, was one of the most pitch-perfect movies I’ve seen on a cinema screen), there’s no denying its ambition even in its fractured result. There’s something for everyone, it’s just the glue that can’t hide the tonal cracks between those pieces.

It’s a fun notion to skip through realities and establish the good and bad in the multiverse. In one, plants grow with as much real estate priority as buildings, in another everything is made of paint and in one Thanos was defeated by magic but at huge personal cost to that reality’s Strange. In most cases it’s a passing visit, a quick tour rather than a road-map…. momentary What If..?s. Prior to release, a great deal was made of the Illuminati’ factor. There’s no doubt that the inclusion of a cabal of influential characters (or, more accurately, alternative versions) from across Marvel‘s screen pantheon to date is important to the feel of the studio attempting to bring a lot of things under its widescreen umbrella. Yes, of course, that’s Patrick Stewart appearing as Charles Xavier – though the musical cues suggest one more in line with the 90s cartoon series not the FOX movies -but the real fun is elsewhere. Hayley Atwell is Captain Carter, who in this alt-reality was the one who received the super-serum rather than Steve Rogers – a la what we’ve seen in the What if… series. Her ‘I could do this all day!‘ certainly raises a smile. It’s good to see Anson Mount (currently headlining his own Trek show, Strange New Worlds) reprising the role of Black Bolt, last seen in ABC’s doomed and quickly cancelled Inhumans and confirming other rumours (and leading to mass speculation about the future) that is indeed John Krasinski as Reed Richards. The latter sets up a lot of potential for the currently in-flux Fantastic Four movie which may or may not feature him… but eagle-eared viewers will have caught Strange’s reference to their connection to the 1960s, which may indicate that the FF movie will feature a 60s origin and subsequent time-travel). But the truth is also that for all the scale of that reveal, this version of the Illuminati is largely cannon-fodder, there to surprise the audience but ultimately run doomed interference for Strange as the Scarlet Witch cuts through them all. (But stay until the mid-credit scene to see another unexpected but welcome guest-appearance/introduction).

This could be legitimately considered Marvel‘s most ‘horror’-tinged outing to date – certainly not aimed at a younger audience. If you went in not knowing who had directed, you’d come out immediately referencing Sam Raimi. The man behind The Evil Dead brings that familiar close-up, literal perspective-twisting technique front and centre and seems feels far more at home in those moments of clawing, nightmare imagery than in the swirling vertigo-vortex of pixels that make up the earlier set-pieces. It might have been an interesting experiment to formally have two very different directors working on the film to underline how different other ‘universes’ feel and, indeed, there are actually moments where you wonder if some of the generic 616 events are all Raimi’s work. There were last minute shoots ahead of release and one guesses that they were to further correct a continuity where the original intent was for the film to come out ahead of Spider-man: No Way Home. Rumour has it that Raimi’s initial cut was a good twenty minutes longer, but the existing film already feels like it’s starting to drag by the time we’re done.

I’ve mixed feelings about the role of Elizabeth Olsen’s Scarlet Witch, the magik maguffin and antagonist of the piece. On a positive note, this is, in many ways, Marvel finally achieving the full-on ‘Dark Phoenix‘ type of story-arc that was always denied Jean Grey. Wanda, or more accurately her alter-ego, is corrupted by primal grief and darker forces into terrible actions, but it does rather fall far too easily into a trope of ‘woman goes mad, must be punished‘ that feels dated and old. We had a whole season of WandaVision to acutely examine the idea of what grief can do and in which Olsen excelled. Here, on the big-screen, the VFX are increased but the examination is ironically simplified and Wanda’s grief is encompassing but one-note. Wanda wants her ‘children’ back – which is understandable, even if they were only figments of her imagination – but the film concentrates on that element so much that it ignores her established wider grief over also losing the Vision (who, unforgivably is barely referenced). The Doctor Strange audience will feel sympathy for the character, but less so by the minute as she becomes less relatable and more simple apocalyptic Big Bad and must therefore die by the end. Given that there is a version Vision gliding around 616 somewhere, it makes it all the more tragic. Raimi has said he didn’t watch WandaVision prior to filming… and that’s strange (no pun intended) because it acts as the film’s entire prologue.

Xochitl Gomez as America Chavez, a new star-spangling character from the comics who has the ability to jump realities, is a welcome and capable addition to the Marvel on-screen pantheon, holding her own against some of the bigger names and may well be a useful in tying-together MCU plans going forward – possibly the touted Young Avengers idea that seems to be gathering speed and roster. Benedict Wong as 616’s Sorcerer Supreme continues to make an impact (even if his actions don’t always make sense) and Rachel McAdams return as a different versions of Strange’s former love Christine plays a more important role than the marketing suggests. Raimi’s good-luck charm Bruce Campbell also makes an appearance…

Indulgent though it may be, Doctor Strange in the Multiverse of Madness is, by no means, a bad film – it’s an enjoyable tentpole romp that merely feels a little askew – not just in its shifting terrain but also a little less assured in its equally shifting tone and execution. But it feels like two very different movies fighting for superiority – Raimi’s lower-budget effectiveness sometimes over-compensating for louder, brasher scenes… and vice versa. That being said, it would be wise to note that early ‘Phase 1‘ movies didn’t all have the cohesive record-breaking appeal that came later either. It’s definitely worth seeing for the performances and source-material sorcery – and probably best in the 3D format and for the in-jokes, easter-eggs and ambition. (Stay for the first mid-credit-scene, but unless you’re a completist for a simple and literal punchline, the post-credit scene really isn’t essential!) 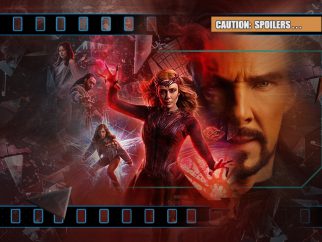 New Who: The 14th incarnation to get an ‘Education’…

All that (and) jazz… Bosch’s ‘Legacy’ endures on FreeVee…