Holding Court: ‘The Lincoln Lawyer’ drives on to Netflix…

You are what you drive. Netflix's adaptation of Michael Connelly's lawyer is certainly road-worthy...

Mickey Haller, once the rising star and enfant terrible of the legal world, has been having a bad time. An important case went south and a subsequent surfing accident left him hooked on Oxycodone… for over a year he’s faced a hard struggle back and is still reassessing whether he can be as good at his job as he needs to be. When he suddenly inherits the entire practise of a colleague – one who’s just been murdered, with no clue as to his killer – he has a hard choice. If he takes the caseload, it includes several clients who’ll need his immediate attention and there’s also the high-profile case of a tech-billionaire accused of coldly murdering his wife and her lover.  Haller will have to bring his A-game and every trick in his book to keep afloat and to satisfy the judge who’s given him a second chance.

But Mickey quickly finds out that while he’s still got the particular set of skills he’ll need, there are plenty of people who don’t want him to succeed and see him as nothing more than a pawn to move or dispose of when they see fit. Now he’s not just fighting for his clients’ freedom, he may be fighting for his life…

It’s been over a decade since Matthew McConaughey successfully essayed Mickey Haller in the 2011 film The Lincoln Lawyer (and subsequently became the ‘face’ of the car brand). Given the film’s success, many were surprised when a sequel, likely based on one of Michael Connelly’s other novels, didn’t quickly transpire. However good the film was, it did overlook that Connelly established a Mickey of mixed parentage early on in the novels and Manuel Garcia-Rulfo, taking over the role for the Netflix series, actually makes a far more authentic version to the source material.

Policing may be in an era of transition, but television policing hasn’t really adopted anything new other than camera-tricks and trends in low-lighting. So, The Lincoln Lawyer doesn’t try to reinvent the wheel – in fact it harkens back to a classic style of televisual law enforcement that’s never really gone away, just shifted with the times. The legal drama, as a genre, has a necessary format, so the quality of the result is in the story, performances and momentum. We’ve established that many current series have pacing problems, but The Lincoln Lawyer is an example of how it can be done well or at least well enough to engage. There’s a lot going on here – over the course of the episodes there’s at least five cases intertwining, some sorted quickly and there to demonstrate Haller’s ability to pivot on a dime, and some stretching over the entire season in some way shape or form. But, truthfully, it’s not hard to follow with a little concentration and there’s a good balance between courtroom scenes and the investigations themselves.

Garcia-Rulfo smolders and pivots his way across the screen with just the right amount of necessary charm, certainly giving us the Mickey from the printed page – slick to a fault but sometimes his own worst enemy when it comes to decisions. He has the physicality of a leading man but is able to let Haller be a man of principles . though one who isn’t afraid to take them right up to the line to make his case work. He’s the kind of lawyer that probably only exists on the screen, but is still the kind you’d want to represent you, expecting him to deliver the goods if not actually turn up to every meeting on time.

Neve Campbell as Maggie ‘McFierce’ McPherson, Mickey’s first wife, provides one of the other pillars of the story. Maintaining a strong emotional connection (sometimes tolerance) for Mickey and not just because of the daughter they share, she has her own legal minefield to navigate regarding traffiking and when some of that directly clashes with Mickey’s cases, sparks can fly. Campbell nails the frustration that comes with the job and with knowing that you might love someone without being able to make it work. The supporting players are also solid.  Angus Samspon (probably best known for his Insidious performances but also The Walking Dead, Fargo, Bruce and Our Flag means Death to name but a few) is his usual dead-pan himself as Mickey’s investigator (and fiancee to Mickey’s ex-wife, Lorna… it’s complicated) Dennis ‘Cisco’ Wojciechowski and brings an undeniable sense of sardonic nobility to his role. Becki Newton (as that second wife and Mickey’s secretary/assistant) also gives Lorna a determination and sense of humour. Newton’s Ugly Betty co-star Christopher Gorham nails the arrogant tech-billionaire who is at the centre of the main case and may or may not be guilty of murdering his wife and her lover but manages to make you dislike the character either way. Jazz Raycole as Izzy, who ends up being Mickey’s driver as they bond over addict-recovery issues also makes her mark. Jamie McShane also continues his niche of law-enforcers with a dark side as Detective Lankford, determined to thwart Haller with every opportunity he gets.

As noted in our review for Bosch: Legacy, there are now two series of similar tone and subject (from the same author) running simultaneously on screen. With Bosch coming out at a rate of two episodes a week and Netflix providing the complete run of The Lincoln Lawyer in one go, there was more than one moment when you think “Where’s X..?‘ only to remember that’s in the other show. The best way may be to binge-watch Mickey Haller in a week and then return to Bosch’s ongoing story thereafter, so as to keep the multi-threaded stories, sometimes actually sharing similar locations, straight. Those hoping for any crossover between Bosch and Haller (who are half-brothers in the books) will be disappointed. Though there’s references to Mickey’s parentage (and flashbacks to his childhood years), there’s nothing of the complicated relationship that links the characters – largely down to the fact that the shows are on different networks. (However, there’s a nice scene in the eighth episode of Bosch: Legacy that plays with the idea if you know what to look for).

Ironically, for a series called The Lincoln Lawyer, the only bits that doesn’t work are the in-transit scenes with Mickey in one or other of his cars. All the conversational scenes may be there as exposition-laid connective tissue, but the awful back-projection through the ‘car’ windows sticks out like a sore legal brief. The softer-focus sequences, often used to explain legal tactics as series punctuation, may be a stylistic choice, but they distract.

Otherwise, The Lincoln Lawyer is a solid adaptation of the book with necessary frills and updates but sure to please Connelly’s existing fanbase. If there is a second season – and on the strength of this there probably could and should be – then it might benefit from having fewer cases, but a similar strategy and road-map… 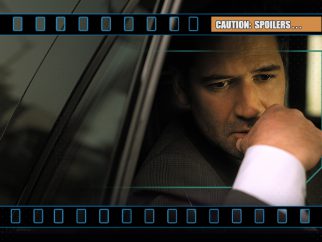 Lawyer and Order: Will ‘She Hulk’ be a smash hit?

Disney+: The (Dare)devil will be in the details…