The last 'Leap' before Christmas has both a present and a past... but what about the future?

It’s 10th July 1996 and Ben leaps into the body of sixteen year old Benjamin Winters who is part of a group that are racing away from the Sierra Youth Academy. At first, it’s not entirely clear why he and fellow escapees – Stacy, Roy and Leah  – are leaving in such a hurry, but they clearly have plans for what they’ll do now they have their freedom.

When the car crashes, the ‘cabin’ they are heading to seems to be very far away on foot, but that leaves plenty of time for Ben to learn the other kids’ problems and the kind of abusive treatment they’re escaping.

And back at the Project in 2022, it seems that Janis still has access to the base’s systems – but will her appearance at the end of the previous Leap help Ben to learn why he started Leaping to begin with?

Kids, eh? The title of the episode Stand by Ben obviously reflects the Stand By Me vibe that the entry strides out for, though really that only goes as far as reflecting a group of outlier kids further bonding on a journey through the woods. That in itself is fine, limited grace under pressure is always a way to get personal differences aired and dramatic tension heightened. But the kids themselves – rebellious Stacy (played by Raquel Elena Justice), recovering drug-addict Roy (played by Anthony Turpel) and disinherited lesbian Leah (Ciara Riley Wilson) with Ben’s  Benjamin being a petty thief – are more like a group of Breakfast Club archetypes, some cocky, some less so, but all feeling somewhat maligned and abandoned and all reaching for something different… and definitely not wanting to go back to where they’ve been. It quickly transpires that the Sierra Youth Academy is a place you send your kids to learn ‘life lessons’ but actually to merely remove them from your orbit with few questions asked.  This, you have to keep reminding yourself, is not some gritty cable or streaming show, but network tv, so it’s all quite safe and undefined, even after all is resolved. It’s revealed that Roy’s actually a good kid able to resist the allure of pain-killers and that some of the kids were put in ‘sweat-boxes’ to teach them a lesson… but all presented in very abstract form so as not to distress the audience or contemplate it beyond the necessary. Here, Ben Song is very much like Sam Beckett, a good, wise soul who tends to offer sage advice, but here it does feel like he’s going around the entire group solving each of their problems with nothing more than basic inspirational poster quotes.

Their trek through the generic mountain undergrowth leads to Leah breaking her ankle and the supply of water running out when a creek is found to be all dried up. When the group eventually find a fully-stocked, off-the-grid cabin it solves their immediate problems but not one of them asks where the owners are…which should immediately raise some red flags. Yes, it’s not long before their Sierra pursuers find the cabin, because for an off-the-grid cabin it seems everyone in the world knows about in 1996 even though Ziggy’s research database somehow draws a complete blank. The sadistic guards make good boo-hiss baddies but they’re essentially cookie-cutter type henchmen (are they really the only two figures at the Sierra Youth Academy, where are all the other workers?) and it’s unlikely you’ll even remember their names by the time the credits roll. The very fact they’ve somehow got away with abusing kids in their charge for so long is also bit of a head-scratcher that the sparce script and plotting leaves unanswered. Even the denouement, where Ben suddenly comes up with the idea of alerting Leah’s media-connected uncle who swoops in with his camera-crew feels about as convenient and satisfying as a Scooby Doo unmasking or ’80s prime-time action franchise. In short the episode’s heart is in the right place, but the execution is fairly threadbare.

The Quantum Leap base continues to be the worst secured  top-secret department as Janis once again compromises the base’s systems, leaving the building in lockdown and Magic and Jen sharing an elevator between floors.  (Seriously, this team can pinpoint a person in four dimensions yet they can’t seem to find the fuse?) This leads to another of those conversations that double as inelegant info-dumps and we have yet another back-story that’s thrown into the mix with Jen getting calls she’s refusing to answer and Magic revealing that Jen’s father has been trying to reach her through him. Jen – who in these opening handful of episodes has become the default recipient of ‘we need a backstory for her so here’s a bucketload of them to choose from‘ – is so far is an ex-con with a troublesome ex-husband and now more family dysfunction – describing her absentee father as “A gambling con-man who left me to raise myself…” which feels more like a casting-call description. (Also one wonders how someone like that knows Magic, a high-ranking general and why Magic thinks he’s worth reconnecting with?)

On the subject of the base, the original Quantum Leap facility was a massive complex in the middle of the desert, inside the middle of a mountain…which makes sense for a top-secret project with a huge powerful computer and a need for privacy. One of the silly things that still niggles about the revamp is that the new headquarters appears to be in downtown Los Angeles. In some cases, shows benefit from having a urban locale – it’s convenient for stories and actual on-location filming, but given Quantum Leap keeps jumping to different time-periods and locales and that everything about the QL base itself has been seen from the inside, the decision for the LA base seems counter-intuitive. (So far there’s only been a couple of scenes with the contemporary team needing to get out and about).

As is starting to become a pattern (especially with network shows and NBC in particular), most episodes resolve a problem of the week and come to an end with a major revelation for the bigger arc to make us tune in next time… and this week’s chapter is no exception. We go into the seasonal break with Ben suddenly announcing he’s remembered why he made the unscheduled Leap in the first place… and it was to save Addison. We don’t get much more info, though the trailer for the rest of the season (returning the first week of January) indicates that Addison might have been (still be?) destined to die at some future date and that’s what Ben is trying to prevent. We also get a glimpse of Janis being captured and brought back to the base, so it’s likely we’ll start to get some answers pretty quickly. It does make you wonder what the plan is beyond that story-arc and whether the show will retain its ‘ensemble feel’ thereafter?

This first run of Quantum Leap has often been somewhat disappointing, not ‘bad’ but feeling as safe as an 1980s show and trading off that heritage but not really offering much more than nostalgia to hold the loyalty of those tuning back in to see what’s new. The convoluted backstories of the Project’s team are so vague as to be uninteresting so far and the Janis story-arc, while the most intriguing, seems destined to flounder without the inclusion of Dean Stockwell or Scott Bakula to provide any pay-off. I’ll still keep tuning in and keep my fingers crossed for an eventual renewal, but the back-end of the season better produce some more compelling and high-stakes stories that make the most of the series conceit, or I fear it won’t be putting anything right thereafter… which would be a real shame. 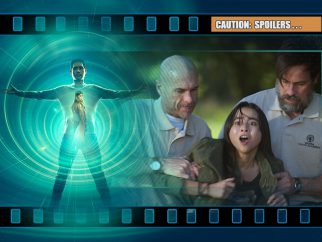