Will Negan betray his fellow survivors to save himself and Annie as 'Outpost 22' faces a deadly stand-off?

The prisoners at Outpost 22 face the wrath of the Warden and see little chance of escape. But Negan is offered the chance of survival for he and his wife Annie and all he has to do is betray the very people who have often said they want him dead for his past sins…

Elsewhere, Eugene has his day in court, but with the judge not allowing key evidence, has the verdict already been set to favour Pamela Milton and her regime?

So here we are, two weeks from the end of the main The Walking Dead series (and, one supposes it will be two weeks because I suspect that AMC+ won’t be showing the finale a week early – next weekend –  for subscribers as it has done with all other episodes so far). Things are definitely speeding up a notch and there are moments that definitely stand-out as memorable and significant, but I wouldn’t go so far as to say it feels like we’re in the end-times of the apocalyptic show, rather just in a strong run of episodes.

At Outpost 22 (aka Alexandria) things are not going well for the inmates or those trying to free them.

Our ‘heroes’ are forced to work hard labour and unsocial hours and anyone talking or stepping out of line feels their captors’ wrath. The Warden (Michael Weaver), the ‘top-guy’ at the Outpost recognises Negan as someone who once had forceful influence over others and makes him a deal – more time with – and the safety of – Negan’s wife Annie (Medina Senghore) if he betrays those who are actively planning a rebellion. In return Negan sees the warden as something of a poor imitation, a tin-pot dictator making the most of his position in a small pool, but he doesn’t seem to have a lot of choice but to concede to the ‘offer’. It looks like he’s betrayed Eziekiel (Khary Payton) as the latter is dragged out in front of the whole outpost with a firing squad ready, but it turns out that Negan has named himself as the culprit so as to give the others a chance. However the warden goes back on his deal and drags Donna in front of the squad as well. Eziekiel, realising what’s unfolding steps in front of the squad, followed by a raft of the other inmates, forming a wall between the guns and Negan. It works as a moment because though we know Jeffrey Dean Morgan will survive long enough for the spin-off, the squad could, might still kill off a lot of the other players..? Nah – it turns out the lead guard ‘Trooper 197’ (Mahdi Cocci) who had been casually denied a transfer earlier, begins to see how ‘south’ this is all going and he and some of his team refuse to fire on all the prisoners. It all turns out a bit bloody, but with the incoming rescuers arriving just in the nick of time, our captives end up free and plotting their revenge.

Back in the Commonwealth itself, the trial of Eugene Porter (Josh McDermitt) goes about as well as the defendant expected with the judge clearly biased and in the pocket of Pamela Milton (Laila Robins) whose tears over her dead son may be real but also pragmatic. Yumiko (Eleanor Matsuura), despite being a good lawyer (or perhaps because of it) largely knows the way it will all play out and if she can’t win outright she knows to play to the audience, her closing speech clearly intended for their ears rather than the ‘management’. Eugene too makes a powerful speech and if it sways no-one in authority, it does make some impact with the general citizens themselves. But will it make a real difference to his own fate?

We close out the episode with Mercer (Michael James Shaw) finally choosing his side and intercepting Eugene on his way to the equivalent of ‘Death Row’.  As he dryly notes and using up more of the show’s  tight allocation of profanity:  “Time to fuck things up!“. It raises a smile and speaks of things to come, but – honestly – it’s actually past time to do that, so hopefully the series can now continue to power up before it ultimately powers down. 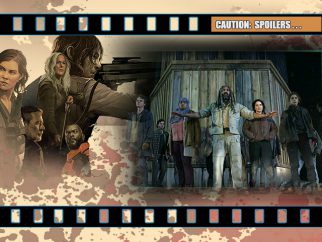