A dark, up-close-and-personal story sees a long-brewed resentment boiling over and one last challenge issued...

Who would target Layton, trying to kill him on the very day that his baby is born? Most people presume it’s Wilford’s doing, or at least someone loyal to him. No-one suspects a person close to home, but now the troubled Pike awakens to hear that his bomb failed to kill Layton and now he is being summoned to help protect him? As Pike holds the newborn baby, his duplicity is discovered and he is forced to flee.

But on a train that has 1029 carriages, there’s still very few places to run and hide and even an expert like Pike knows it’s just a matter of time.

Layton knows that Pike is armed, with more bombs and dirty secrets and even though it goes against his immediate instincts, he wants to offer his one time ‘brother’ a way out. But will Pike accept… and should he?

Penned by rising teleplay-scribe Tiffany Ezuma and directed by the ever-reliable talent of Leslie Hope – both on excellent form – this was an episode of Snowpiercer that probably felt the closest to the early days of the series, back to the darker-hued, rougher-edged times when the ‘Tailies’, separated from the so-called ‘civilised’ classes further up the train, had their own cultural, societal rules and immediate ways to deal with the arguments and clashes that came up. In the case of an escalating conflict between two individuals, there was ‘Old Ivan’s Way’, a process to nip it in the bud. The two individuals would elect to sit opposite other, privately and spend time working their problem out. If that enforced ‘deal with it’ situation didn’t work, then the two individuals could take it to a physical level, battling with hands and weapons. It some ways it’s brutal, in other ways quite reasonable… every way being made to deal with the situation and then draw a line under it…. even if it might be a bloody one.

As noted before, Steven Ogg has made a career out of playing wide-eyed individuals who deal unwisely (or unluckily) with the power they receive, but not always in an unsympathetic way. His Pike is not a ‘bad’ man. He’s been brave, fearless, a hero to some and always been willing to say his piece. But he’s also one who has been prone to make bad choices or play ill-advisedly with the hand dealt… and even then the argument that he makes that Layton (Daveed Diggs) has created several of those situations (for which Pike has had to suffer) is not entirely without merit. We know the two men have a troubled, combative history, even beyond the start of the series, each of them envisaging a fairer train and a more equitable existence, but with diverging views of how to get to a similar destination. Pike sees himself as a rough-and-ready, uncompromising agitator, always willing to do what’s needed even if that means getting his hands dirty to do so. He’s killed for that dream and even, on Layton’s wishes, murdered for it. But with Layton assuming the ‘leadership’ role, Pike has seen his ‘brother’ become more of a political animal, keeping secrets, making choices and needing compromises that Pike feels are unwise at best… and, at worst, a betrayal of the cause for which they both fought. Pike may have liked the temporary upgrade he got in the wake of the revolution, but he’s not a person who actually desires personal power and one suspects that the time he spent on Snowpiercer fighting a guerilla war against Wilford after Layton left, were probably more to his liking and true nature.  Thinking Layton might never come back – and even after his return –  Pike would rather have seen Ruth installed as leader, feeling her more worthy.

So, after the revelation of Pike’s bombings and his fleeing in panic, it’s fascinating to watch the way the two men initially confront each other in a more formal way. This isn’t like Layton and Wilford, each man with a seething hatred for the other, like two leaders fighting over a prize to own or a country to lead. It’s a different kind of ‘personal’. Layton – though he has his own obvious rights to be angry – utterly misreads the situation in his attempts to defuse with Pike. Layton believes that he’s taking some of the pragmatic high-ground and being generous in offering Pike a kind of redemption, despite what’s happened. Maybe he is, but the offers of better accommodation and more responsibility too easily feel like bribes rather than olive-branches and Pike sees them as a further corruption of his old friend, one who had previously ‘forgiven’ him old trespasses but often brought them out as leverage whenever needed. Pike had flourished without Layton but with his return it had been snatched away. With Pike also realising that Layton is lying about New Eden, there’s far too much of an abyss now between them for it to go well and when the battle moves to physical violence – with each man having his own blade – the eventual outcome is as tragic as it is inevitable.  There was no way Layton was going to lose this battle, even if it comes at a heavy physical and spiritual cost. What it costs him – and also in some quietly under-played moments with Alison Wright’s Ruth – is obvious.

Elsewhere we see how others are dealing with their own tragedies. We see Sean Bean’s Wilford seeming to question himself about his methods to date. Audrey, ever his cheerleader and rallying cry, is appalled by his fumbling, humbled attitude when she manages to get to see him. In any other episode, their reunion would likely have been the highlight, but it was a packed entry with much competition. As an audience it’s also hard for us to believe Wilford is playing anything other than a long-game, though it’s clear recent events have taken a toll.  Somehow it seems unlikely the audience will ever be on his side, though bean is relishing playing such a role. Alex (Rowan Blanchard) also reaches out to Roche’s daughter Carly (Esther Ming Li) to help mend the latter’s estrangement with her father. Hopefully we’ll see more of Roche (the ever-impressive Mike O’Malley) as he was a stoic, admirable character in early episodes and it’s been awful to see the tragedies that befell him and how he had crumbled under that weight.

Also, a special mention for the return of Miles (Jaylin Fletcher) a character who’s been notably absent. he may have grown to twice his original height while off-screen, but it’s good that the series hasn’t completely forgotten about a character who was quite pivotal at one point and then almost vanished entirely. He has a part to play here, but one wonders if it’ll now be another season before he gets to do more?

An excellent, strong, emotional and brutal episode highlights a lot of what makes Snowpiercer work – a claustrophobic environment always likely to bring out the worst in people and their differences and showing shades of grey rather than presenting any answers or true heroes or villains in the moment. One wonders of the series can keep up this level of multi-layered drama, but so far it’s been able to do so and even offer surprises. Will Josie (Katie McGuinness) step up into a more active role? Is Pike’s bomb going to be like Checkov’s Gun by season-end? With both Layton and Wilford in less than perfect health, there’s much to play for, a raft of supporting characters and players more than up to the task and it’s fascinating to wonder what’s going to happen next… 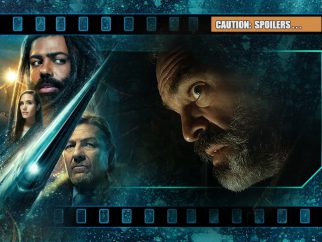