In the penultimate episode, is Snowpiercer's pyramid scheme about to pay off or will Mel freeze over?

Determined to find the carriage that may be Melanie, Snowpiercer sets off in pursuit of the signal that Wilford located, but as the minutes tick away, no-one knows what they will find. An empty pod? Melanie’s dead body? Or, against all probabilities, Melanie alive and well?

But as the pod is brought aboard, no-one has any idea that the power-plays aboard Snowpiercer and Layton’s well-intended lie are all about to be up-ended…

Okay….Worst Kept Secret! It’s always great to have Melanie / Jennifer Connelly back in any capacity. Given that one of the images of her in the teaser-trailer had yet to be seen, the smart money was always on her (and the show) somehow finding a way to return. Earlier this season it was in an ethereal, narrative kind of way. This time, we get the real deal. Yes, the explanation is fanciful and gets dangerously close to the already high suspensions of disbelief the show sometimes demands (because a Melanie with very little air or warmth left, expert engineer that she is, managed to construct a mini-carriage and all the tech need to survive? Okayyyy)  but it’s all deftly and satisfyingly executed on a VFX level and the show deliberately cranks up the tension, showing us Melanie’s efforts and her failing body as time ticks by not actually confirming that she’s survived until a good ten minutes into the episode.

There’s a lot being said about faith versus science in A Beacon for Us All. Melanie’s fateful decision to take over the train and turn it away from the Horn of Africa is built on her factual knowledge that the track there is dangerous and the more ethereal opinion that a lie – however well-intended – is always a dangerous thing on which to construct pragmatic strategies for survival. She knows she’s scuppering Layton’s plans – and there’s certainly a view she’s been selfish and putting her own beliefs first – the counter-argument (which she herself makes) is that she also might well be saving everyone because the real data accumulated doesn’t bode as well for the train and the time-factor demanded she act. But, really… so publicly? It’s Alex who also speaks to a more balanced approach… reminding her mother that the lie made of hope has reunited the train, that there’s a good (if not great) chance that Africa will bring what’s promised and….  here’s the zinger – that if they’d only put their faith in hard, cold probabilities and ‘facts’, then no-one would have come looking for Melanie because logic would have dictated she died months before. That comment certainly hit home.

‘What game is Wilford playing?‘ is the other main theme of the episode. It was tempting, for a mere moment, to envision a flawed, egocentric character doing a pivot and becoming a dangerous ally to Layton rather than an adversary, but that was never likely (however fascinating it would be to watch).  Wilford has brought on Melanie as the spoiler – knowing her cold pragmatism and realising she’ll favour the truth – despite him leaving her to die. Wilford doesn’t need Melanie to like him or agree with him – but he knows she’s the spoiler he needs. And then… he’s free. The minute that Wilford offers his guards cigars, you know the shmucks are doomed. Wilford used the poison that was channeled to him by the still-batshit-crazy, blade-wielding L J Folger (who reminds us that ‘Don’t think I won’t sacrifice what I love to get what I want‘) and Dr. Headwood head to make good his escape, adding to the turbulent mix ahead.

The LJ/Osweiller dynamic will be interesting to watch and the Layton/Josie lack-of-expected-pairing (after he declares his long feelings for her and she says she doesn’t feel able to give love to anyone) is genuinely sad… but it’s actually the Till/Audrey teaming that plays out more interestingly. Despite the nagging feeling that Audrey is still batting for Wilford’s team and could likely re-shift her alliances back to him next week, there’s certainly a genuine connection between her and Till, both born out of people trying to decide what they want and whether they feel they’re worth it. I’d like to see where that relationship would go – though on Snowpiercer, it rarely goes well.

If there’s a problem with this episode of Snowpiercer it’s not that we have yet another supposedly expired character back from the dead (because, honestly, this show could give comic-books a good run in the ‘dead/but got better’ story-arcs), but that there’s just too many things happen too quickly as we power towards next week’s season finale. Melanie’s recovery, especially after what her body has endured in a repeated comatose state, should really have taken a couple of episodes to run its course, even by Snowpiercer‘s standards. The scenes of her reuniting with Alex and Ben were great and heartfelt, well-played in a range of emotions by all. But she’s up and at ’em by the end of the first act,  back in official attire before the credits and the story of the power-shift (a reset that echoes the show’s earlier days) generates the ‘What happens now?‘ aspect might have been better suited for the season finale itself.  Despite the fact that such premature celebrations are almost always doomed and snatch defeat from the jaws of victory, we knew things wouldn’t go exactly to plan (the fourth season’s already confirmed and it would be hard to have Snowpiercer with out the titular train) but with the Melanie/Layton/Wilford dynamic, there’s just the inkling of an obligatory rather than organic factory-reset happening, so it will be interesting to see how the actual season finale will leave things. 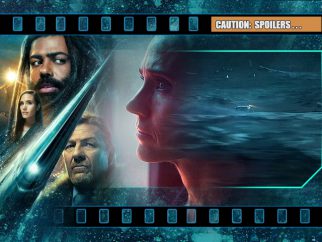