There's a lot of fun moments in 'Watcher', but some of the interplay seems very much out of character...

Rios is being held at an ICE detention facility and risking ‘deportation’ after the raid on the makeshift hospital in which he is being treated. Seven and Raffi’s attempts to locate him meet with more problems… ones are not helped by Raffi’s impulsive need for transport.

As the Borg Queen seeks to influence Jurati, Picard goes in search of answers. But even though he finds some familiar touchstones in the past, locating the ‘Watcher’ and finding the truth about the diverging timeline may involve more than he realises…

We all knew Guinan was likely to play a bigger role than merely book-ending the season., though this week’s developments may have come as a surprise. I’ll be honest here and say I’m not a fan of ‘Young Guinan’. It’s nothing to do with Ito Aghayere’s acting ability – which is just fine – but it’s simply that it doesn’t have any real connective tissue with the character we know and love… and for Watcher to work as intended, it needs to.

Guinan – whom Whoopi Goldberg made her own – was always defined as the sage voice of reason, often knowing more than she expressed and providing a nuanced emotional touchstone as needed for the main cast. Watcher‘s version is completely unrecognisable with only their ethnicity, name and drinking establishment intact.  Disappointed and gun-toting, this is a character talking angrily and passionately about ‘contemporary’ racial injustice and looking ready to abandon her post because Earthlings are going through a rough patch. Now, it’s entirely possible (and probable) that characters change their looks, points of view and attitude over longer periods of time (good drama is made of such) but there has to be a through-line and it’s blatantly missing here. This just comes across as a rather clumsy Mary-Sue creation being used to extol a critical view of contemporary social issues but without the essential character qualities, particularly when she’s then reduced to being an intermediary with a bigger ‘boss’. Also, for a season that’s lovingly slow-tangoing with Trek continuity, it’s strange that there appears to be a blatant contradiction to the memorable Next Generation two-parter Time’s Arrow (in which a time-displaced Picard meets Goldberg’s Guinan for the first time – from her perspective -in 19th Century San Francisco). It might be too complex to address at length, but that neither character recalls this signature event in any way feels like a bizarre oversight for a show specialising in smart continuity references. (The production has apparently claimed that it’s not an error because time is in flux and those ‘previous’ events are in question and may not happen unless Picard restores the timeline….which, frankly, seems a weak excuse – there are so many reasons that doesn’t work… such as Picard, at least, would have remembered it).

Rios is also on the wrong end of another topical issue: undocumented deportations and the role of ICE. There have been massive controversies about the role of America’s domestic Immigration and Customs Enforcement department and their officers, with questionable tactics being used in the name of keeping borders secure and the way that people are rounded up and their rights infringed. Addressing such and giving representation to the disenfranchised is important and it’s good that there’s some common-ground with Deep Space Nine‘s acclaimed 2024-based story Past Tense – with ‘Sanctuary camps’ being referenced and large areas of the homeless… but it just seems a little lazy to have an overtly-aggressive and prejudiced officer repeatedly beating up Rios while he’s in custody. The audience knows the point being made and the position the show is taking and eventually the episode belabours it all just a little too pointedly. That being said, Santiago Cabrera handles it with aplomb, continues to smoulder across the screen and delivers some nice lines, not least a wry rounding-up the ‘story so far’.

Aboard La Sirena, Agnes Jurati has some nice power-play interaction with the Borg Queen in which both actors have an interesting duel of words and looks, but though it bodes well for some more developments down the road, there’s nothing that reaches the scalpel-edged face-off and dialogue from last week’s entry. Also worth noting is that Jurati’s concerns about the butterfly-effect and altering the timeline are pretty much blown apart by Raffi and Seven stealing a police-car and being involved in a high-speed chase through LA streets. That Seven handles the vehicle as well as she does might be surprising (Raffi might disagree) but this seems to be a bit of time-filling fun evoking the classic style of adventure tv after several episodes of ‘deeper’ material. Even more on point is the genuinely fun call-back to The Voyage Home‘s bus encounter with a variation on the large boom-box problem that Spock rectified with a nerve-pinch. Here the same commuter, or at least the self-same actor  Kirk. R. Thatcher (actually an Associate Producer on The Voyage Home) is once again disturbing passengers but quickly reconsiders his musical choices as a result of merely seeing Seven’s stern look, avoiding any physical result. Lesson learned!

Elsewhere, we get a scene with Q (John de Lancie) narrating a scene in which a woman is silently reading a book at a cafe. It wasn’t immediately clear whether this was some random person that Q was toying with for the sake of the viewer’s enjoyment, but if you see her story credit on the IMDb suggests she may also have a role to play as events move forward. We also get a firmer indication that Q’s powers seem to be failing him – is he really the person in fuller control of this time-travelling escapade? The reoccurrence of references to Picard’s childhood finally explain why a Frenchman has had an English accent all these years and there are more hints about the previously unknown traumas of Picard’s childhood trauma. There’s also the reappearance of a familiar face (but, perhaps, not the one you were expecting) at the episode’s end, which certainly raises several more questions if it’s who it appears to be or even someone else taking that form.

After three quite exceptional episodes, this is still good with plenty to recommend it, but it’s the first moment that the over-all story slows enough that, despite the individual pacing, it seems momentarily unsure of its footing. Ironically, in an entry more concerned with its social-awareness messages than in keeping to the innate power of its own story, it loses some of the admirable dramatic icy edge of recent weeks. 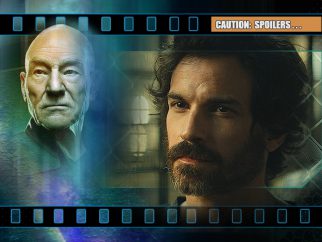