Masterchief is an iconic games-character, but is Paramount+'s 'HALO' too late to the party...

The year 2552: On a distant outpost on distant planet, the people of Madrigal have no love for the Spartans, super-soldiers of the (Unified Earth Government) and UNSC (The United Nations Space Command) who seek to dominate the galaxy. But when an attack on their enclave happens it turns out to be the Spartan soldiers, led by the Master Chief (aka  John -711) that arrive to tackle the real threat, an inter-species threat known as The Covenant. However even when the battle ends, there’s complete carnage. Investigating the nearby area and trying to find the reason the Covenant came to Madrigal, the Master Chief locates an object that floods his minds with images of a family-life he doesn’t recognise.

Ordered by the UNSC to take back the only Madrigal survivor – a young survivor named Kwan Ha – to learn more about the enemy’s operations, the Master Chief suddenly seems distracted from his mission and when his orders regarding Kwan ha change, the celebrated soldier decides on a new course of action…

A stoic, tough armour-clad warrior whose face is usually hidden by his mask, a code of conduct that’s been unexpectedly questioned and a sudden young figure that they have been tasked to protect. No, we haven’t jumped to the third series of The Mandalorian, though that is going to be the obvious and most recent touchstone to which Paramount+‘s HALO will inevitably be compared.  Arriving like a cross between that show and the cult 90s franchise Starship Troopers, to name but two influences, it’s easy to see the audience and demographic that the show is aiming for, but it’s not entirely clear whether HALO has enough of its own identity to get the same kind of momentum.

Based on the legendary and ground-breaking games series from Bungie /Xbox Game Studios – which have sold over 81 million copies worldwide and generated over $3.4 billion –   HALO is a franchise that still remains one of the cornerstones of the industry’s evolution, the title to which many action-shoot-em-ups are compared and there’s been much anticipation over the last eighteen months or so for this screen adaptation. But even if you didn’t know any element of its source-code, some of the scenes have been deliberately designed to reflect both the first-person-shooter viewpoint and the style of combat gamers can expect. How obvious that is as an ongoing concern – and your expectations regarding that –  may affect your enjoyment.

The production-design in itself gives us a range of believable environments – a dusty, backwater planet, a base under attack and the more sterile and icily pragmatic military starship. You’re likely looking around and thinking ‘I‘ve been here before…‘ but that’s part and parcel of modern sf – often it’s not the uniqueness of the pitch, but merely the ingredients and tone made from that. The basic Spartan armour is lovingly recreated to practical effect, though given the number of productions that have beaten this to the screen, it somehow looks rather generic. There are also moments when the CGI- rendering of some of the more kinetic scenes is more obvious. Generally, the essential VFX factor is fine. Ten years ago  the alien monsters and the ensuing battle would have been outstanding, but we’ve come to expect such a high benchmark after recent productions that though HALO blends its practical and post-production elements well, it meets requirements rather than exceeds them or pushes any boundaries.

There’s more violence than one might anticipate – or, more accurately, more consequence. Lasers slice and dice, blood splatters across faces and in one scene a group of cowering young kids are slaughtered, though it’s just off-camera (a group of hallucinogenic teenagers earlier get cut down on screen – see, don’t do drugs, kids!). But while a network would have likely demanded a more PG-rating for the action, it’s the kind of high-count carnage that mostly resonates as the kind of collateral damage you’d find in the video games – plentiful and fast but not often truly visceral.

Pablo Schreiber (Orange is the New Black) is stoic and physical enough to make the Master Chief/John-117 work as an archetype, though it’s still too early to judge if he’ll be enough to shoulder the series (or, in the wake of The Mandalorian, how often he’s actually the person we’re watching deliver the goods, rather than a helmeted stand-in or CGI. Like The Mandalorian there’s both the benefit and curse of being something of a blank-slate character, but also one not called upon to show much character as yet. There’s also a RoboCop vibe given to him randomly remembering aspects of his life pre-Spartan program and which form part of the reason for him going AWOL in search of answers. At this point, both aspects simply feel like homage.

But so far the most interesting character is Yerin Ha’s Kwan Ah, the sole survivor of the Covenant’s attack on her home enclave on Madrigal. Taught to hate and take up arms against the UEG and their Spartans, she’s loathe to trust the arriving soldiers, even though the armoured squad target the Covenant attackers rather than the townsfolk… and so when the Masterchief and his team take her with them when they head off-planet, neither ‘rescuer’ or ‘rescued’ see it as any act of mercy. She’s essentially right not to trust the Masterchief who would likely have thrown her out an airlock if he hadn’t had something stirred within him by the artifact he found. Whether each will grow to work with the other is the likely journey as MasterChief seeks some home truths.

Elsewhere, Natascha McElhone delivers a Dr. Halsey with long white medical coat, questionable ethics and a clipped accent, though it’s hard to tell whether her own agenda is really any better than the UEG (Unified Earth Government) and UNSC (The United Nations Space Command) who hold her purse-strings when it comes to life-and-death decisions. her actions in the pilot spare John-117’s life, but she clearly has her own agenda.

Lucasfilm put a vast budget, their best talent and cutting-edge tech into making The Mandalorian and still faced some creative hiccups from reviewers when it launched. HALO – a profitable IP which should have been able to come close to matching that – appears to have half the budget and enthusiasm (still high judged against some of the competition).  It’s one of many best-selling game titles now heading to the screen – next year will see the arrival of The Last of Us. Slower than some gamers might like because of the political/conspiracy threads being laid out and too generic for those who might not recognise the remaining specific game elements (but who have a lot to entice them elsewhere in the schedules), HALO seems to be a nice diversion but not yet anywhere near a must-see.  Ultimately, this feels like the kind of show with potential that will have to be realised quickly or otherwise it will be too late to the party to gain real traction.

However, it’s already been renewed, so go tell the Spartans. 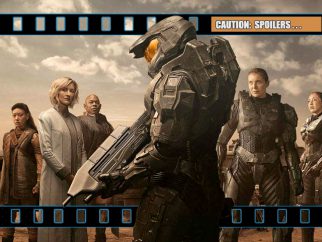