Carlson and his soldiers continue their assault through what remains of Ian’s enclave, the survivors hiding within its walls and trying to work out a way to survive… but an unexpected visitor who stowed away may prove a liability…. and results in a major choice for Negan as he makes a promise to Maggie.

Elsewhere, Sebastian Milton forces Daryl and Rosita on an ‘off-books’ mission merely to line his own pockets, demanding they enter a walker-filled estate and bring back the previous owner’s money…and when they refuse he makes it clear that it’s not only them he can punish for disobeying him.

But with Commonwealth’s civilised veneer slipping, who can be trusted to do the right thing?

The Walking Dead may be a tale of post-apocalyptic survival, but with the introduction of the Commonwealth storyline and the re-emergence of pockets of ‘civilisation’, the focus is back on more traditional forms of power-plays. Unfortunately, the idea of overt class-systems where the ‘haves’ trample the ‘have nots’ has always had some topicality and The Rotten Core is an episode that firmly puts its focus on spoilt little rich kids believing in a sense of innate entitlement.  Sebastian Milton isn’t exactly the more subtle example of such – the preppy petulant son of a politician, for whom the endgame is all about his comfort. True, mummy and offspring may have a tactful tolerance for each other rather than any form of deep love, but being the son of the Commonwealth President gives a wide scope for misbehaviour which Sebastian believes should allow him to use others to keep that level of comfort. There are times when it almost reaches levels of caricature, but then there are times reality can do that as well.

Daryl, a man of both immediate action and slower strategy as and when needed, has tolerated Sebastian’s hand-waving condescending attitude because he can use them to gain favour and get further into the Commonwealth ranks, to be in a position to act when needed. But when Sebastian’s infers threatening Judith and Rosita’s daughter Coco to get his way, it takes less than a second for the young man to feel Daryl’s blade at his throat.  Given there are those loyal to Sebastian (most likely for their own status), Daryl and Rosita are largely out-gunned, so have to stand down and accept Milton’s demands that they take his ‘off-books’ mission to ‘liberate’ the safe from the zombie-heavy property (money that will keep Sebastian’s comfort-levels intact). We quickly learn that they are just the latest in a long-line of unwilling people he’s used for his own purposes – and nobody else appears to have survived. But it’s a shift in the relationship, each now aware of exactly what the other is capable of when pushed.

As noted before, it’ll be interesting to see if the series follows a similar path to the comics when it comes to Sebastian’s ultimate place in the story. They’re playing him up as utterly despicable, but it’s not possible for things to play out exactly as they did in the source material (given the divergent stories to date), but if it’s even remotely similar, then the enfant terrible is capable of even worse things.

In an episode with two ‘A’ stories rather than an A and B, the other arena of action is Maggie, Negan, Aaron, Lydia and Gabriel trying to survive Toby Carlson (Jason Butler Harner) and his murderous rampage through the enclave visited in the last episode. Harner always makes a good unhinged baddie and when we realise that Maggie’s son Hershel has also stowed-away and has just been caught, we immediately realise that Carlson is the kind of guy who’d gladly use the child as a bargaining chip and throw the little mite off a roof if it would help him declare victory. Thankfully, Negan’s interception doesn’t allow Hershel’s discovery to become wider public knowledge, but it does set up one of the episode’s best scenes. Hershel realises that Negan is the ‘bad man’ who killed his father and points a gun at him, clearly ready to use it. Negan, as is his wont, decides not to lie to get out of the situation but to tell the boy the truth – he did commit that murder but that he’s no longer that person… and more pragmatically, that a gunshot would bring the current bad guys running. That would mean Hershel would get his revenge but likely doom everyone else. It’s a gamble on Negan’s behalf – is Hershel really old enough to weigh those kind of moral dilemmas or is he just a boy who misses his father? Thankfully, Hershel does lower the weapon but it’s clear that Negan – who has brokered something of a stand-off stance with Maggie – accepts that at some point the bigger obstacle will rightly be Hershel. If the series diverts even more from the books, I could almost see Negan ultimately dying at Hershel’s hands – though the news that there’ll be a Negan/Maggie series (bafflingly the subject of an announcement even before the end of this run) seems to put a pin in that for the foreseeable.

Michael James Shaw also continues to prove an intriguing character as Mercer, who may be a major figure in the Commonwealth’s defenses but is genuinely interested in justice for all, even if he’s willing to keep the status quo for as long as possible. His actions at the end of the episode suggest he has strong reservations about the rot at the core of the Commonwealth and will  be an ally when possible. Equally he would do his job and would act against our ‘heroes’ if they took pre-emptive action. It’s likely he’s going to be forced into taking a firm stance and side in the near future.

The closing minutes suggest future battle-lines being drawn. Carol knows that it was Hornsby that put her friends in danger and though they maintain their ‘allies’ posture, that too is a direct confrontation waiting to happen. The return of Leah – revealed as the person who actually stole the recent shipment of weapons – also suggests a wild-card in the mix. There is a danger that The Walking Dead continues to have so many characters that it’s division of labour and balancing of story-arcs will prove too uneven as it heads into its main series endgame, but so far each of the episodes have produced some excellent individual character moments and there is a sense we’re heading towards a defining climax down the road. There’s only two more episodes in this second-of-three runs… so that road is growing shorter. 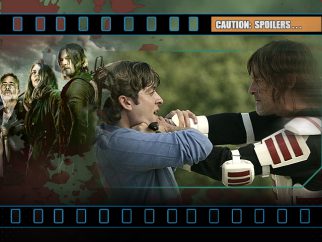