The Hill-Top may have declined the Commonwealth's outreach, but will another group of militant survivors get the same offer?

While Maggie discusses her reasons for distancing herself (and Hill-Top) from the Commonwealth’s oversight, there are those who disagree and Maggie begins to see some familiar faces ready to depart.

Meanwhile, Gabriel and Aaron accompany Toby Carlson on what appears to be an outreach initiative for the Commonwealth – trying to bring in a group of survivors into the fold. led by a man called Ian (guest-star Michael Biehn), they are a community with quite a militant take on religion – and a group that don’t take kindly to the entreaties of strangers.

But as we see in a selection of ever-more illuminating flashbacks, things are not always what they seem… and danger and help can come from unexpected sources…

While there’s been some drama off-screen – with Norman Reedus suffering a concussion and delaying filming of The Walking Dead‘s final episodes – the fictional drama continues to deliver some swerve-balls.  Following Maggie’s decision to not align herself with the Commonwealth there’s some discussions in her own ranks about pragmatic trust and survival. Several more survivors want to go to Meridian and Cassady Mclincy’s Lydia points out that if they don’t take the chance for a ‘better’ life when it’s there, what are they actually ‘surviving’ for? She has an understandable point, even though – as viewers – we’re becoming more and more suspicious about the Commonwealth and its agenda.

But the real story is taking place further away from Hilltop and deals with the repercussions of a mortally-wounded visitor appealing for help before he expires. We find out that the stranger (who, for a second, I thought was TWD:World Beyond actor Ted Sutherland) was part of an outreach program trying to bring in some other survivors into the Commonwealth. But looks can be deceiving…. The slow-reveal of previous events, putting events and agendas in context in almost reverse order can be something of a ‘stunt’ if used too often or too casually, but it works well enough here as we peel back the strategies in play and have to re-evaluate scenes we may have already viewed earlier in the episode.

The minute you see an unshaven Michael Biehn spouting religious rhetoric and sitting behind a big desk surrounded by well-armed guards, the first thought is going to be that The Walking Dead is once again going to draw water from a Negan-esque well. The show has had its fair-share of warlord types over the seasons (Negan, The Governor, Alpha, etc.) and however good Biehn is – and he still has an undeniable presence – there’s likely to be some contempt in the familiarity of the stereotyping.  A feeling of ‘Haven’t we been here before?‘ Yes, Biehn immediately channels exactly the kind of personality you’d expect. He may have been a major piece of The Terminator and Aliens and The Abyss but over the years he’s transitioned more into less blockbuster/tentpole outings and made a career of grizzled, menacing and often unbalanced villains.

But the predictable turns out to not be so much –  all there as a decent way to wrong-foot the audience as to what’s coming, though if the faithful have been paying attention the ‘Next time on…‘ teaser after last week’s episode probably gave a huge chunk of the game away before we started. Because though Biehn’s ‘Ian’ is clearly a man not to be messed with… the kind who keeps a shelf of heads on the wall made up of those who he deems tried to take advantage of his ‘good nature’, he turns out to be – in this case – the target of a vicious killer and not the killer himself. If he survived the episode he meant well have been a problem, but a head-shot is likely to stop that.

No, it’s actually Jason Butler Harner’s Toby Carlson that we should have been keeping an eye on. He’s certainly a strange fellow when we meet him, the kind of person that people meet and raise their eyebrows at his decisions – but he seems an overtly-driven, impassioned new-ager than anything to actually worry about. The actor himself should have been the first/second clue – Harner is the guy who essayed a unscrupulous, unhinged FBI agent in Ozark, just the latest in a series of dark and troubled characters. Harner gives Toby a complex personality – someone who was a CIA operative in the ‘Before Times’ and who has genuinely tried to leave that part of his life behind him. But Josh Hamilton’s Lance Hornsby knows where all the bodies are buried – probably quite literally – and essentially blackmails him into doing his bidding when needed. The current mission is not the proposed outreach program that Aaron (Ross Marquand) and Gabriel (Seth Gilliam) believe it to be, but to surgically remove ‘Ian’ and his survivors from the board, less they demonstrate to Lance’s boss Pamela Milton the mistakes and questionable alliances he’s made so far.  It’s just another example of how dangerous Hornsby is becoming (could he actually end up playing the related story-beat that was originally Sebastian’s in the comics’ endgame?). The episode leaves Carlson still in play – throwing people off roofs and in firm pursuit of Aaron, Gabriel and possibly late-to-the-party Negan (who appeared to have been helping out Ian’s group since his departure several episodes ago). One suspects ‘Toby’ will be a temporary threat, but he makes an effective, off-balanced one. 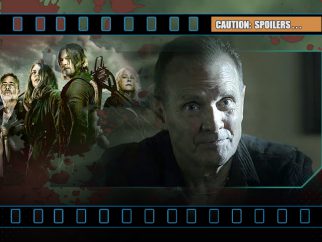