There's time for comedy and tragedy, but Picard's new season excels at the character moments...

The La Sirena needs to get rid of its boarding party before initiating the planned time-jump, but though that is accomplished, it’s done so at great cost. When the ship makes it back to 2024, the mission continues to be complicated. The change in the time-line happens somewhere in the city and some point ‘soon’, but the specifics are not known, so Raffi, Rios and Seven must venture out in to the streets and try to blend in.

As predicted last week, it doesn’t take long for our heroes to dispense with the delays to their journey, the members of the Confederation being the targets of phasers definitely not set on stun. Which of course, leads us to the main thrust of the season, getting everyone back in time to fix the time-line.

It will escape no-one’s notice that stepping into the benchmark-embracing, capable shoes worn by director Doug Aarniokoski for the last two episodes, is a talent perhaps best known for her own experiences with classic time-travel: Back to the Future‘s Lea Thompson, now forming a solid second career in directing. The creative touches in that time-jump manage to echo some of Trek‘s previous time-travel entries but also include flourishes like a tear on Agnes’ eye going backwards and the sparks and flames aboard the La Sirena in reverse. Thompson knows when to go big and go small and judges both accordingly throughout the hour.

The second season of Picard continues to cherry-pick some of Trek‘s finest outings, binding them together in one narrative and giving them enough of a twist to be both nostalgically familiar yet refreshingly fun.  Time-travelling a star-ship crew to our contemporary century was, of course, done to memorable and profitable effect in Star Trek: The Voyage Home (you’ll never listen to a whale-song quite the same way again) and there’s obviously going to be continued parallels here as the 23rd Century cast vainly try to assimilate into the Los Angeles of 2024. Fish-out-of-water scenarios are often fun and it’s mere minutes before the travellers’ obstacles appear. A young girl thinks the materialising Seven is a superhero (she’s not entirely wrong) and  Rios (Santiago Cabrera) ends up a bit of a mess, plunging on to the sidewalk after a less than stellar arrival. It is, of course, another opportunity for science-fiction to provide subtle (and not so subtle) social and cultural commentary.  While The Voyage Home talked about the care of the oceans, Picard‘s moved on to climate and the entire planet. Seven and Raffi walk through homeless camps that are only yards away from shiny skyscrapers and the extent that humans don’t care for their own planet and each other is a mystery to them – but a given critical stance to us. (This story is not yet on the level of the acclaimed Deep Space Nine episode Past Tense – also set in 2024 and now considered an almost prescient  time-travel episode about racism and class-warfare – but it’s playing with similar dice when we look at the way society and the authorities deal with the disenfranchised). While James Doohan’s Scotty provided a punchline for audiences because he thought computers would respond to his voice commands (my, how that’s dated!), we’re now… Seven and Raffi’s relationship is used as a way for them to con their way into a broadcast tower to get their signal-bearings, but it’s also an opportunity for the show to show diversity in a fun way that’s accepted by the other characters in the scene (the security-guard barely bats an eye-lid) and the audience. There’s also a more nuanced moment where Seven admits that, without her Borg implants, people look at her differently and she likes it.

One of the most memorable scenes is also one of the most creepy, something that wouldn’t look amiss in a horror outing like The Ring or The Thing – the sequence as a disentangled Borg Queen crawls like a wounded but determined arachnid along the floor towards Agnes, hauling herself up like some night terror made half-flesh – and all this only moments after the matriarchal monster taken a tumble in almost comic fashion as her containment unit fails. It speaks to the direction, actors and editing that almost all the sequences involving Annie Wersching, Patrick Stewart and Alison Pill are consistently shifting and expertly played out. Many shows would have chosen to do the show-don’t-tell route and go fully inside the ‘assimilation’ procedure, likely producing an abstract, mind-melding montage to crank up the tension. The show, admirably, leans completely the other way and we’re left to conjure up our own images as the camera relies on Pill’s face and inflections to sell what’s going on  – private horrors given only a flicker of exit behind her eyes. As with all awkward but talkative characters Pill’s Agnes has been a bit of a marmite member of the ensemble but here both actor and character shows their strengths and it works incredibly well.

The other scene that shows the actors’ range is Michelle Hurd’s Raffi breaking down after she fails to save Elnor (Evan Evagora) from his critical injuries. It’s a surprise loss that removes the most able action character from current proceedings.  Raffi is angry that Picard wouldn’t divert the power from keeping the Borg Queen intact to he medical unit. Frankly, she has every reason to launch a withering attack on Picard for his choices (pragmatic or not) and what the often comical duel between Q and Picard tends to cost in collateral damage to others.

That both Raffi and Agnes have moments that hit back at Picard is also a core strength of this show’s planning. While Captain Picard was often the by-the-book but commanding presence that anchored The Next Generation, the elder Picard is one who’s clearly made his fair share of mistakes, personal and professional. Season One of the show named after him laid some of those fault-lines bare but also seemed to give the character something of a free pass when it came to others calling him out on it. Here Raffi overtly enforces eye-contact and calls out her ‘disappointment in leadership‘ and Agnes’ mental mining leads to her calling him a ‘pretentious prick‘. And while it might be tempting to put Patrick Stewart front and centre, the series is letting other members of the cast take some of the narrative weight. It might have been pragmatic reasons such as COVID restrictions, but keeping Stewart on board the La Sirena allows the famous Yorkshire-born knight to play to his acting strengths, up-close-and-personal dialogue born out of years of close-quarter stage-work… sometimes delivered with a rasp born of age and life experience… and it works well. This is a show clearly not afraid to make maximum use of the skills of its cast rather than play to formula

So far, the show is firing on all cylinders/crystals in all departments, managing to be funny, serious, dramatic and tragic, without it appearing to be lightweight and opportunistic mere lip-service… it’s homage without overt reverence, working as much on establishing its own credentials and giving Trek fans of all ages something to celebrate… 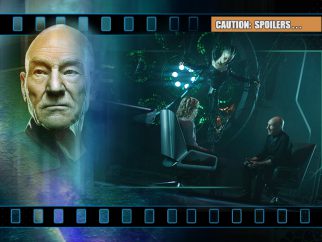