Star Trek: Discovery's reach still exceeds its grasp of story-telling as it signs off on another badly-paced season...

Tarka has betrayed the peace mission and is determined to detonate his device. Species 10C immediately cut-off communication and Discovery attempts to find a way to chase down Book’s ship before Tarka can go through with his plan. But the effects of the anomaly are already being felt on Earth with debris entering the solar system and barely been deflected by Earth’s defenses. It’s a matter of hours before the full-effects hit and it’s clear only a percentage of earth and neighbouring planets and systems will be saved by immediate evacuation.

Book finds a way to for he and Reno to escape their captivity, but even with Discovery closing in, there won’t be enough power to beam everyone off the ship. Even as a one-way mission to defeat Tarka is initiated, there seems to be no way to fully make Species 10C understand the destruction their devices are causing.

As members of Star Fleet scramble to find a solution but prepare for the end, who will have to pay the cost to avoid the loss of millions?

“It’s been a long road – getting from there to here…” So went the lyrics to the oft-left-out branch of Trek mythology, Enterprise. But it’s also more than an apt description of the fourth season of Star Trek: Discovery, a story stretched out over thirteen episodes with a concept that would have worked far better in a quarter of that time or even less. And it’s that baggage, ballast and bluster that makes it hard to really evaluate the finale on its own merits. Because in there, somewhere, you can see the ideas and get a sense of the ambition, scattered with with good moments but by the time you finally reach the pay-off, there’s likely a significant section of viewers for which it will not have been worth the wait.

In last week’s review of a worthy but wordy episode full of high-brow, methodical first-contact bridge-building between races with almost nothing in common, I wondered about the tone of the finale. Would it continue to examine those more subtle and quite un-Trek-like angles or would it drop them all for a more traditional, action-packed send-off? In many ways, that’s exactly what happens and what proves the problem… Coming Home essentially pivots away from deep thought to a ticking-clock scenario in which only a handful of dots are hurriedly joined and the most difficult aspects of the set-up are hand-waved away. Last week, the language-barrier between the Federation and the Species 10C seemed abstract and interesting in the sheer chasm it sought to cross. But in this episode – once broken-off contact has been re-established – we’re suddenly communicating in not only complete sentences, but having Saru transcribe complex, moral, nuanced speeches that seem less like difficult/tentative First Contact and more like exposition-laden tweets. It’s needed to conclude the story-arc, but it’s another example of the feast or famine and hurry-up-and-wait of the plotting.

And that’s part of the real problem with the writing in general. It’s felt, from week to week, that the series has been vastly under-written… a vague idea of its ‘big problem’ is placed at its centre but there’s no real sense of urgency or any clue on how to hold it all together as various elements attempt to stay in orbit.  There’s been a check-list of worthy things like diversity and inclusiveness to applaud, but not as much attention given to basic cohesion and far too many generic distractions thrown in merely to artificially slow the momentum. Events happen because someone suddenly though they should (the finale’s attempted mind-meld between T’rina and Species 10C is the sort of thing where you want to scream “Yes, why didn’t they at least try this sooner?“. Crew-members are moved around on a whim, coming and suddenly going in the most contrived ways (Blu del Barrio’s Adira get built-up in stories only to vanish until the last episodes when she pops back up, Mary Wiseman’s Tilly suddenly decides to switch careers,  Ronnie Rowe’s Lt. Bryce has a quickly-inserted scene that says he’s off to help David Cronenberg on a I-can’t-discuss project, the brilliantly acerbic Tig Notaro (who deserves her own spin-off, asap) makes no real apperance until the final episodes… some of which may have been down to unavoidable COVID restrictions but still feels awkwardly obvious in the narrative). Here, a multitude of regulars including the bridge-crew are still thrown little more than a few lines of dialogue and (even more awkwardly, a string of increasingly cringe-worth, repeated framing/reaction shots that suggests someone thought it would be good to remind people they exist) while there are recurring guests having been introduced with far more dialogue that seem pointless. For instance, Hiro Kanagawa (playing blunt linguistic expert and advisor Dr. Hirai) may be a respected veteran actor more than capable of doing his scenes but feels entirely surplus to any real requirements.

The one thing that the episode does successfully is make us wonder who might perish along the way. There are several scenes where it feels like the intent is to create some water-cooler shocks and give various characters a bittersweet farewell send-off… and it being a finale, those stakes are a bit higher. Tilly and Admiral Vance sit on the bridge of a possibly doomed base comparing life experiences and with no real hope of survival. Mary Wiseman’s Tilly is a fan-favourite but suddenly stopped being a regular halfway through the run and Oded Fehr has been a decent supporting character but not a regular, so it was entirely possible (if not actually probable) that they could be killed off in a bold move. When someone is needed to fly a possible suicide-mission aboard a shuttle to take down the DMC, it looks like Lt. Detmer (Emily Coutts) is the person who has to step-up and that’s played out for several intense seconds before compromised General Ndoye (Phumzile Sitole) decides to take the mission instead, a mea culpa for her deceits earlier. It looks like she’s certainly a goner until we’re informed she was successfully beamed out of danger at the last second off-camera. When Book’s transporter signal falters, it seems David Ajala’s character has been written out giving Burnham a valid reason to break down (if just for a moment before compartmentalising it and taking command again). That he is later shown having survived and been plucked to safety by Species 10C is not the biggest surprise, but there’s a good few minutes when you genuinely think the show might actually have pulled the trigger on a significant death. In the end, Discovery can’t follow through and the only ‘death’ is that of the villain / not villain/ misunderstood / tragic  (*delete as needed) Tarka and even in that regard we aren’t entirely sure if he’s gone to meet his maker or gone to meet his friend…  So, truth be told, despite the stakes and the build-up we manage to bow-out of the current run with no actual, verifiable fatalities except in some listed statistics.

There’s the obligatory nods to Trek mythology and another nice reference to the USS Nog (named after the character the late Aron Eisenberg played in Deep Space Nine) and USS Yelchin (named after the late Anton Yelchin, who played Chekov in the JJ Abrams movies). But, of course, the marketing clickbait is the appearance of Earth’s President at the end of the episode and concerns another ‘Abrams’ as the founder member rejoins the Federation. Yes, in a casting that didn’t get leaked (quite an achievement), it’s Stacey Abrams (no relation to J.J.), the American politician, lawyer and voting rights activist (who served for eleven years in the Georgia House of Representatives and was Minority Leader from 2011 to 2017) and who is a massive Star Trek fan. Though only on-screen for a few minutes (and likely a one-off) the role needed some gravitas, which Abrams clearly provides. Some may decry it as partisan, political casting, but given that the values she expounds on screen are inclusive and hopeful, it would seem partisan in itself to criticise it.

The effects, though of the usual Discovery standard… look okay, but not always consistent. The asteroids/debris heading towards Earth look fine when it’s an ongoing threat but when Species 10C call off their device, it genuinely looks like someone has just ran the film backwards (and, though it’s a quibble, I’m pretty sure the explanation is not how astrophysics works even in the Trek universe!). We end with a Lord of the Rings lengthy montage and narration of the various crew planning to enjoy what is likely to be limited downtime (a fifth run has already been confirmed) but which feels like it could have been a series-ending tie-off if the renewal hadn’t come through. Evaluated on its own, Coming Home is a perfectly okay if somewhat uneven and quite journeyman episode, but ultimately weighed down by what has come before and the speed at which it was delivered.

Each year I hope Discovery will rise to the challenge as it’s clear that the ingredients and talent are there… and each year it goes around in circles tilting towards slightly different windmills but on impulse rather than warp-drive. While Picard‘s nostalgia-fest somehow feels exciting and rejuvenated, Discovery‘s retreads merely feel tired and going through the motions and with other Trek coming up, I’m genuinely not sure if I’ll be on board for the 2023 run of this show unless it can boldly get out of a rather consistently bland groove… 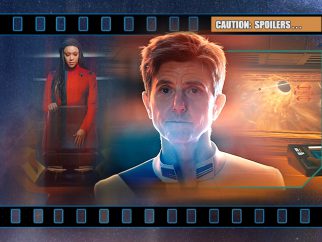