Snowpiercer has no real choice but to investigate Melanie's possible survival - but it may endanger the whole train...

Wilford is convinced that the signal he detected is a sign of Melanie Cavill’s miraculous survival and though Layton and others remain suspicious, Wilford makes a convincing case for taking a detour from their race to New Eden to at least investigate. Layton is sure that Wilford has an ulterior ‘angle’ but can’t deny the desire to rescue Melanie or at least find some confirmation of her fate.

When their diversion takes them into an area now filled with toxic volcanic gases, the mission becomes more time-critical with the train’s filters become unable to fully cope with the dangerous cloud outside. But if they are to make it through someone will have to step up and risk everything to secure the train’s progress…

If Snowpiercer was your typical sf show, this would be the obligatory episode where the starship is in peril and the crew have to find a way to save it against the clock – fairly much a familiar staple of any number of such episodes in a season. Snowpiercer – hardly your average sf show – has an ‘eternal engine’ that’s almost eternally under some sort of pressure from without or within. Yet Setting Itself Right is probably the closest to the specific in-peril formula. Shorthand pitch: There’s a nasty cloud through which the train has to travel and all the people inside have to work out how they’re going to help / survive it. Of course, it’s less about the exterior than the interior and Snowpiercer uses the threat as a way to examine human reactions and connections. As with many episodes of Snowpiercer, a lot of the tension and drama is generated by the lensing. Actor-turned-director Leslie Hope is becoming the go-to helmer for this season, consistently delivering the goods and keeping the complex arcs on track and this week there’s some stunning use of colour and lighting.

Snowpiercer, as a train, is a claustrophobic space at the best of times. The snow outside has been deadly since the series began – people freezing in a matter of seconds or minutes, so the poisonous cloud really shouldn’t feel like such a switch. But increasing the physical and emotional pressure with a variation on the outside force does make the walls close in a little more and you can feel that with every thread being spun throughout the hour. Layton (Daveed Diggs) is full of self-doubt, now almost convinced that his ‘visions’ of New Eden were nothing more than subliminal prompting from an old photograph and worrying that his deception will not be discovered but could – worse – end up getting everyone killed. It takes some conversation with Asha to restore some of his faith, even if the origins of his decision remain somewhat subjective. It’s a bit of a surprise to see Archie Panjabi’s Asha being removed from the board after only a handful of episodes – most of which she’s been sidelined as an observer to the train’s politics and personalities. It wasn’t a surprise to see Asha take a risk to save the train, more that she didn’t survive it, sacrificing herself to clear the train’s air-vents when there seemed so much potential left in the ‘wild card’ aspect. It’s not the first time the series has introduced a character and then had them die unexpectedly (it does like to subvert the template) but it’s a shame we won’t get more of the character and actor who could have been the key or the fault-line in Layton’s New Eden initiative.

Wilford (Sean Bean) – much recovered from his recent ordeal – believes that Snowpiercer needs to investigate the signal he believes is coming from Melanie. His full motives are still not entirely clear – he was at least partially responsible for the events which saw Melanie left behind to begin with. He remains a thorn in Layton’s side, perhaps even more so because he may be right and Layton knows it.  By the end of the episode there’s the observation voiced that his motives for now seeking to get Melanie back onboard work simply because she’s a spoiler to the status quo… and one that might eventually tip in Wilford’s favour given that Mel might not entirely back the way Layton has been seeking to control events.

Elsewhere  L J Folger (Annalise Basso) indulges her inner  WTF/masochistic tendencies as she indulges in opportunism of the (literal flesh) and  there’s an examination of the relationship between Mickey Sumner’s Til and  Lena Hall’s Audrey. They’ve both had complicated loyalties and approaches since the original revolution on the train. Til was a guard who ended up helping the Tailies when she saw the kind of man Wilford but remembers some of the things she did before that. Audrey  pivoted in the opposite way, she was the neutral and seemingly wise arbiter and boss of the Night Car who found herself back under Wilford’s spell and compromised to the point of abject betrayal. It’s interesting to see two broken people bond, especially as Audrey has the gift of mental healing – though I’m not entirely convinced of Audrey’s redemptive arc and that she isn’t merely playing the angles (there’s a moment I was sure Audrey was going to break Till’s neck, not caress it). It’s also true that Sumner’s face has never been more expressive and her performance so intense. Amidst all the tension and angst, there’s also a delightful interlude with Mike O’Malley’s Roche rebonding with his daughter Carly (Esther Ming Li) to the sounds of Roxy Music‘s ‘More than This…‘

We leave the episode with the train locating the carriage from which the signal is emanating. Is it really Melanie? (Our bet: yes, as the season teaser has an image of Jennifer Connelly that’s yet to be used). Or  is it an empty vessel… or worse? The answer, welcomingly and frustratingly, is just a week away. 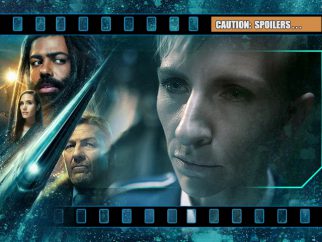 Yes, we Khan. Ms. Marvel gets a trailer…