With Melanie back at the helm, it appears all-out war is inevitable. But can the train keep on track?

Melanie has revealed Layton’s lie and she now has control of the engine… with only hours before Snowpiercer hits the critical length of track where they must either head towards the Horn of Africa and the potential new Eden or continue their world-spanning journey. She is convinced that despite her own initial hopes, the risk is too great to head to the possible warmer climes and refuses Layton’s demands to return control.

Wilford has escaped his ‘prison’ and now holds the literal ‘middle-ground’ between Melanie and Layton. He’s taken the Night Car and has made it a buffer-zone between the gathering forces.  But neither Melanie nor Layton has enough innate support to swing the decision of the train’s fate, so as the train teeters on the edge of another all-out war, Melanie is going to have to make a hard decision to ally herself with the person she thinks will keep the train’s wheels turning and the passengers safe – for better or worse.

As the minutes tick by, she makes her fateful choice…

Perhaps the bane of many a modern show (particularly those with a seasonal running time shorter than the traditional network series) remains pacing and the only quibble here is that Snowpiercer has packed a lot of power-shifts into the last two episodes that might have worked better, dramatically, over three or four chapters. After all, it was only at the start of last week’s episode that Melanie was found and ‘thawed’ and by the end of A Beacon for Us All she’d already ignited a mutiny. Throughout the finale, The Original Sinners, she’s back to full form, slipping back into her full management position and staying ahead of seasoned players like Wilford and Layton.

As ever the show is about the powerplays and, in this case in particular, genuinely not quite knowing who was playing whom and how at any given moment. There were instances when, despite each of their foibles and agenda, Melanie (Jennifer Connelly), Layton (Daveed Diggs) and even Wilford (Sean Bean) had some valid points to make about the probabilities of survival. Layton’s not wrong to want something better than life on the train and to keep people’s hopes alive, Melanie isn’t wrong about the dangers and the rights of the passengers to know the full truth and Wilford – duplicitous megalomaniac that he is, despairs that the other two never fully commit to the sacrifices being called for. It was an occasion where the threeway posturing could go any number of ways. Plenty of times I winced when Melanie seemed to be actively courting Wilford against Layton, even for purely numeric and pragmatic reasons to keep her vision of the train’s future and survival intact. No-one bought for a second that Wilford would be willing to play a subordinate second-fiddle for any length of time, but was Melanie really tilting at a temporary alliance? It seemed so.

Director Christoph Schrewe expertly cranks up the tensions as battle-lines are drawn and (as so often in Snowpiercer) there’s something both contemporary and relevant and yet medieval about the way shields are furnished, spears are drawn and loins are girded for a war. It’s a situation where there’s an imminent fight that no-one really wants and yet you can feel it could begin at any moment unless cooler heads prevail. When Melanie and Layton indulge in one last phone-call – akin to the Kennedy hotline between Russia and America – and look for one final exit strategy, you can feel the weight of their words and the truth they both speak. There’s egos at work on both sides and consequences that will result from action and reaction… and they both know it. Looking at the clock the viewer’s mind probably thinks that with a good third of the episode left, a solution won’t be found.  So it was a surprise and a relief when Melanie’s alliance with Wilford was revealed as a sham when she and Layton managed to find genuine common ground that avoided bloodshed. The solution was a deceptively simple one: split the train back into two and let the passengers decide if they would stay with Melanie’s worldwide cycle or with Layton’s New Eden hopes.

But what of Wilford? It was interesting to see Wilford initially ‘playing’ the part of the physical and theological halfway point between the tail and the engine, a buffer-zone that enabled him to make others pivot  towards him. Much as though I like Sean Bean and his performance, the decision to spare Wilford and send him off in the same pod that just sustained Melanie for six months, feels like a danger lurking and a fate deferred. When there’s a possibility that they’ll bring him back (which they surely will), will it just be a spinning of wheels and almost a pantomime and comic-book feel of his miraculous ability to avoid outright defeat? (As Wilford says himself “Just tear off the band-aid!“). Bean is a past-master at death scenes and after three physical seasons on the show, it would have been great to see a line drawn under his era, either going out in a blaze of glory or having his plans pulled out from under him one very final time. The snowy show just can’t let it go.

That being said, all the others regulars get their moments. Is Audrey (Lena Hall) and Till’s (Mickey Sumner) fledgling love affair doomed? Will newlyweds LJ (Annalise Basso) and Osweiller (Sam Otto) go their separate ways? Can Ruth (Alison Wright) survive a cold encounter? Alex (Rowan Blanchard) reconciles with her mother even if their paths might diverge. Hey, wait… is that… yes…we even have Jaylin Fletcher as Miles providing some computing intel. Yet, despite the rising tensions of the episode and its season-ending status, the death-count was surprisingly almost non-existent. The only real casualty seems to be L J Folger, felled not by some nefarious scheme, but accidentally choking on the glass eyeball of her late father (not a sentence you’re likely to type very often). Given that she’s deliciously psychopathic and had some experimentation on her and that the show has form for killing off characters and then reviving them, it’s not guaranteed she’s an absolute goner, but if she returns the show is also running the risk of going to that ‘resurrection’ well once too often and diluting its own power. (Even the reappearance of ‘Icy Boki’ played by Aleks Paunovic this episode, comically felled by a falling access panel felt less compelling than it should).

Even once that split-decision has been made there were still real tensions for the last fifteen minutes. The route to New Eden was just as dangerous as Melanie had predicted and there were moments when it looked as if the series might pull a staggering ‘Red Wedding’ cull of the cast and kill off a huge portion of its ensemble. (While it would have been a huge pivot to lose a raft of names and seemed unlikely, Snowpiercer has a tendency to make some risky swerves and, dramatically, it might have worked).  In the end Andre and his passengers do make it through to New Eden and witness the thaw (up to a balmy -5 degrees) and there’s a palpable sense of wonder as the people step off the train, some for the first moment in their lifetimes, and feel the real sun on their faces.

Of course, the series  – already renewed for a fourth season and announcing ‘Agent Coulson’ Clark Gregg will be joining the cast, isn’t about to leave everything too neatly. What otherwise might have worked as a series ender decides to leave a cliffhanger with Mel and Snowpiercer returning after another three-month circuit and seeing a flare go up. Is this a sign all is well and Big Alice should join them… well, not quite… are those missiles?

We leave with a final announcement that S4 is already filming… and that Paul Zbyszewski is taking over for Graeme Manson as showrunner. It’ll be a long wait. 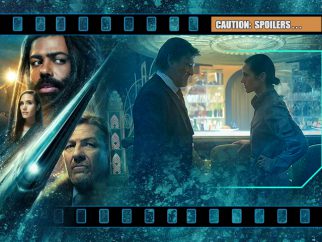