Powered as much by nostalgia and melancholy as dilithium and warp-drives, Picard - the series and the man - are going boldly...

The Stargazer is on Red Alert, with crew-members rushing to the bridge to defend the ship against an in-person attack. They appear powerless to stop whatever is happening and with major systems compromised, Admiral Jean-Luc Picard orders the ship to self-destruct.

Forty-eight hours earlier and Picard is at his chateau in France, contemplating the yield from his vines and reminiscing with estate manager and confidant Lahris about his life. There’s a connection there, but – as ever – Picard keeps things at a distance. After attending a graduation service at Star Fleet, Jean-Luc is asked to head out into space again, to meet up with the newest version of the Star Gazer which has discovered a strange rift. Seven of Nine, now helming the La Sirena has also been drawn to the anomaly. Glowing green and emitting static it is a potentially dangerous enigma, but Captain Cristóbal Rios and Dr. Agnes Jurati have managed to decipher a message… actually hundreds of messages, all saying one name: ‘Help us…Picard’

But when a ship comes through, even its unusual shape can’t hide the fact it’s obviously of Borg design and an attack appears imminent. How will Picard, Seven-of-Nine, Rios and Star Fleet respond?

From the first frame to the last, there’s certainly a cinematic quality to this opening salvo of Picard‘s second season – directed with aplomb by Doug Aarniokoski. It brings to mind both the scale of the movie-releases (televisual deep space has rarely looked as shiny, vast and impressive) and also echoes some of The Next Generation‘s finer episodes. The mixing of contemporary regrets, overwhelming forces, the presence of Whoopie Goldberg’s Guinan, the hint of alternative history and dynamic rips in the fabric of space and time… and what we know of the forthcoming time-travel elements, brings to mind entries like the absolute classics The Best of Both Worlds and Yesterday’s Enterprise. Those are tough yardsticks to aspire to and though there’s no fist-pounding climactic speech (as yet) akin to the seminal ‘Let’s make sure… history…. never forgets the name…Enterprise!‘ from the latter episode, it does feel like that it’s definitely a touchstone for the planning and a pillar for the blueprint. It’s perhaps wise to remember that unlike TNG‘s one and two-parters, the story we’re watching is to be paced over ten episodes and not forty-four minutes and so, if the opener feels like a set-up and a checklist of ingredients – which it sometimes does – that’s simply because it is.

Had this second season been our original and only entry-point to the older Picard, rather than last year’s somewhat uneven season, it’s likely it could have worked just as well – the only thing different would be some of the supporting players whom we met and grew to care about last time. Even those who didn’t see Picard’s first season would likely be able to pick up the gist of things through some of the de rigeur exposition that always comes with opening episodes. There is, of course, the danger that these finely-mixed familiar elements may turn out to be a cherry-picked checklist of fan-favourites and only the coming weeks will tell if those come together with as-equally-effective connective tissue.  The opener feels like a purposeful, book-ending swansong to Picard, which would be fine if we didn’t know there’ll be another run after this (a confirmed third and final season was shot back-to-back with this run), so we’re not sure what’s to come in the longer-term and over that period.

While Stewart looks inevitably older and the famous voice resonates with just an extra bit of rasp, Yorkshire’s favourite knight shows no sign of being any less able to step into the shoes, skin and command chair of Captain (now Admiral) Jean-Luc Picard, owning every ready room he enters. Stewart knows the terrain so well that he seems to effortless channel both the yearning for the stars and the nagging regrets he’s experiencing about the various roads not taken, especially of a personal nature. Picard has never been married (in this timeline) and the relationships he’s had have been tempered by his ability to put light-year-measured distance between himself and others as at moment’s notice, especially for reasons of duty. To be honest, the melancholy, though effective, is a little deux-ex-machina…. Picard’s actually had his fair-share of ladies and it doesn’t seem like he’d have too many deep regrets in that department. Equally, the introduction of his mother (in flashback memories that would seem to indicate an abusive marriage and a tragic end) is an element we’ve never heard mention of in any Picard-related Trek-canon to date and feels somewhat left-field. It feels more like something introduced because Stewart is a passionate advocate against domestic abuse, having gone on the record about his experiences in his own family home as a child. However, there’s every indication the difficult subject could be handled well and that’s the ultimate barometer. I think we’re in safe hands.

Perhaps a deliberate statement that this isn’t quite your father’s TNG, there’s a lot of alcohol running freely through the veins of the episode. Picard and Lahris (Ola Brady) discuss their closeness over a bottle of the vineyard’s finest (‘Cheers, Big Ears…‘), Guinan has a fine selection of beverages in her bar at 10, Forward Avenue (geddit?) and it’s hard to know what to make of Alison Pill’s Agnes clearly being several fleets to the wind on the otherwise sedate bridge of a cutting-edge starship.

For those aching to see some of the bigger moments of the teaser trailer come to life, John De Lancie’s Q comes only in the closing seconds and in the tease for the season to come. There’s a nice, brief nod to Q ‘aging himself up’ to have parity with Picard, thus side-stepping the real life aging factor and the promise that his mix of mischief and near-omnipotent arrogance is firmly intact. Is he the reason there’s an alternative time-line (one that looks far less friendly) or has he actually saved Picard from a self-destruct death on the Stargazer… so far it’s hard to tell.  Whoopi Goldberg reprises Guinan (briefly noting that her slow-aging race can speed up the process if they want and she’s done so to keep customers happy) and once again gives Picard some sage personal advice as he considers where his past has brought him and to where he goes next. How big a role Goldberg will play is not clear though given Guinan’s own unique abilities and insight would suggest this is far more than a brief cameo.

Alongside Aarniokoski’s visual flair, the design work is also truly impressive. From the welcoming and organic vineyard and chateau to the glossy halls of ceremony, from the streamlined Star Fleet ships to the more ramshackle haulage of La Sirena, there’s an individual sense of scale and brilliant use of hues and colours – sometimes warm and welcoming, sometimes cold and clinical. Though we will see a more traditional look to the Borg Queen (to be played by Annie Wersching) in upcoming episodes, the figure who appears on the bridge of the Stargazer feels wholly different – as if production has been given free-reign to completely reinvent the idea of the Borg… immediately alien and mysterious, cloaked in a mixture of reptilian and clockwork arachnid armour/skin and raising questions on the mix of organic/cybernetic. I hope we see a lot more of this as it sets the standard.

Are there niggles? Yes, but only minor ones. Lahris and Zhaban were the supportive and devoted Romulan couple working at Picard’s chateau in the first season and – in the wake of Zhaban’s off-screen death –  having Lahris make genuine overtures to Picard about her feelings for him, even ‘over a year later’ feels a little ‘off’, but largely being saved by Brady’s subtle, nuanced acting and the performers’ chemistry. Other returning characters have conveniently found different callings and it’s stretching believability a bit that some have now suddenly got high-ranking positions in Star Fleet while previously working rebelliously outside the system. Equally, the sheer ease of physically bringing the characters together over what should be vast distances seems to make the galaxy feel just a little smaller than it should. Starships have moved forward since the days of Picard’s captaincy but warping from Earth to far-flung regions to look at the mysterious space/time rupture takes seconds of screen-time and appears to take a few narrative hours at best, rather than a few days. Again, these are mere observations and don’t detract from what is a strong opening episode.

If this opener, The Stargazer, sets the quality for writing, direction and acting throughout the weeks to come, then we’re in for a great ride on a level with the series and the movies. (It gives me no pleasure to say that watching Picard throws the other Thursday Trek series Discovery into sharp relief and inferior territory… and if I had to pick one over the other, this second season featuring Patrick Stewart, though it looks back to roads travelled and not, is light years ahead of its stable-mate in every way…) 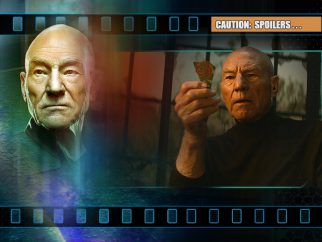