Hurry up and wait. In a week with the more dynamic 'Picard', 'Discovery' offers more padding, not progress...

Time is of the essence with the knowledge that the anomaly may lay waste to the Earth and surrounding systems in a matter of hours. Discovery and its diplomatic mission have only a brief window to learn as much as they can and hopefully turn the tide.

So Burnham’s decision to investigate what appears to be a dead planet is met with differing reactions. Some think it may lead to clues on the nature of Species 10-C, others feel it’s a distraction. However Burnham takes an away team and promising a time-limit to the mission. What they find is disturbing, but does it offer any real insight. As Saru, Burnham and Culber begin to react strangely to the environment, it’s up to Detmer to work out what’s wrong.

Meanwhile Book and Tarka decide to return to Discovery, sneaking aboard to find out Star Fleet’s plans… and Book sees an opportunity to place a ‘Plan B’ in readiness…

I’m sure that the original scheduling plan for Paramount+ did not include having two Trek series debuting their new episodes on the same day with an overlap of three weeks. Likely down to the COVID situations hitting the production and broadcast of both Star Trek: Discovery and Star Trek: Picard, that has nevertheless turned out to be the case. While it might have given a traditional network a ‘block-booking’ chance for marketing, the nature of Paramount‘s subscription platform – and the ability to watch episodes as the viewer pleases after they debut – doesn’t offer quite the same opportunity. However there’s a very good chance that Trek fans will have settled in to watch both shows within hours of their simultaneous release… if not back-to-back then in quick succession.

The unfortunate truth is that it’s not likely to have done Discovery any real favours… the difference between the two productions being rather obvious in scripting, visuals, organic story-telling and innate mythology. It’s not that Discovery is bad – though the fanbase is certainly divided on their opinions to date – but its fault-lines are all the more obvious when placed next to a show that shares its universe but clearly has a better understanding of its strengths.  While Discovery has sprinkled in names, designations and references from Trek lore, it’s currently centuries-removed from much of the other shows, so does so in a distanced way, feeling like a quick easter-egg tweak or an additional line to a script. Picard lovingly and unapologetically embraces them in a way that might be opportunistic but makes every one count more.

The comparisons are inevitable but even in trying to judge Discovery on its own merits, we’re back to repeating the same gripes about momentum and pay-off that have dogged the show for so long. Surely, it’s been mused all season, the secrets of the mysterious ‘Species 10C’ must be coming soon and for the last couple of episodes the impatience has been palpable and extended padding obvious. Was this week, now close to the end, finally a pay-off of sorts? Nope, not a bit of it. Once again, the show finds a way to keep underlining the urgency of the mission (Earth’s going to be wiped out in hours! The Vulcan homeworld will likely suffer the same fate!) while simultaneously offering up distractions and delays. Even characters within the show are quite reasonably saying ‘Is this really the time for an away mission?‘ rather than speeding towards the intended time-sensitive encounter that is the ship’s entire mission?

The real trouble here is that Discovery‘s seasonal story-arc (with a cast who can be up to the job when they have the better material) could have made a diverting adventure if it had been half the length, given tighter focus and if the tone had felt anything but been-there, done-that. Instead the latest episode demonstrates several moments that show just how ludicrous some of the artificial delays are becoming and – frankly – how little work is being done to hold it all together in any meaningful way. There’s a time-wasting, artificial slow-mo ‘power-walk’ scene with its Away Team where it’s impossible to tell if it’s a pastiche of the familiar cliche or just a misjudged effort to generate import and tension… We then have the latest in the ‘Give Book and Tarka something to do‘ scenes. Having navigated the journey through the Galactic Barrier (that took Discovery an entire on-screen episode) entirely off-screen and then sneakily hidden behind a space-rock to monitor the other ship, they decide the smart move is to sneak back aboard Discovery, theatrically tip-toeing by a top-notch sentient computer (that/who is usually hard to circumvent) and placing instantly-created new tech in an astonishingly convenient almost-deserted Engineering. It’s almost Scooby-Doo-ish in execution and logic.

The story on the dead planet’s surface isn’t entirely irrelevant to the story-arc, but it once again involves a lot of standing around and then suddenly solving complex and almost-impossible problems in a matter of minutes. The scenery itself looks good – the massive alien husks and the revelation that the remains may have once been a nursery of sorts feeling a little like a nod to the likes of bigger productions like Prometheus and avoids much of the ‘alien-prosthetics-of-the-week’ that has been a staple of Trek shows for years. The idea that the alien language might also be chemical-related rather than vocal is also a refreshing change though, excepting the ‘trippy’ hallucination experienced by the team, the ‘invisible’ aspect lacks the dynamic visuals needed. Interestingly everyone wears similar ‘away’ armour except Lt. Detmer (Emily Coutts) who has a yellow stripe, feeling like it’s a ploy for an action-figure variant. It’s also interesting that the conclusions jumped to aren’t really born out of the facts. There’s no real indication whether the remnants are ‘Species 10C’ or just more victims and so the information gleamed isn’t guaranteed to help as much as everyone proclaims.

Part of me feels like I’m being too hard on Discovery. It might not be cutting-edge, brand-leading sf, but it’s perfectly passable entertainment – better than some shows. Any one of these episodes would be fine if it was a solitary example of big-problems, miraculous solutions ‘filler’ instead of being the norm – but combined with so many other moments that demand ‘urgency’ but deliver delay, the show never seems to learn anything from previous seasons, simply moving pieces slowly around in a sequence of scenes rather than an actual driven narrative. There’s handful of characters we care about (Doug Jones’ Saru and his romantic storyline continues to be the brightest star of the arcs so far), some that have been shuffled off and more whose names still escape us. But hey, after a COVID-enforced leave, at least Tig Notaro’s back!

While Picard boldly goes, Discovery meanders and acts as a placeholder, made all the more frustrating because you can see how the show could be – and should be – more dynamic with the talent involved. It’s… fine, but in a competitive schedule, that’s no longer quite enough. 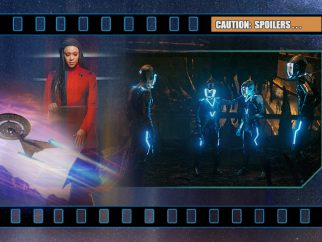 Gone Girl: Walking Dead finds that Love is a Battlefield…