We're back in a recognisable 'suburbia', but is the Commonwealth about the common people?

The Alexandrians who chose to come to the Commonwealth are having mixed experiences in the weeks since they arrived. Some are seeing the benefits of a return to ‘civilisation’ while others see only echoes of the old world and all its worst aspects.

Carol has always been a good ‘people watcher’ and remains suspicious of some of the Commonwealth’s less-advertised leanings – but with Eziekel’s health still a matter for concern, she intends to use all the influence she can.

But when an ex-guard with a grievance takes a hostage during one of the city’s soirees, Daryl has to make a hard choice as to who gets the credit for navigating its aftermath…

Every so often, The Walking Dead provides something of a handbrake turn. Whether by a time-jump or a change in locale, the series pivots to a new dynamic – building on what has gone before but suddenly heading in a new direction.  As such, the second episode of this second-batch of final season entries – entitled Old Haunts – actually does both and so feels very different from last week’s tale of unforgiving weather, outlier angst and post-apocalyptic brutality. At the risk of using a word rarely used in the fanchise, the result is almost… sedate., full of domestic, suburban dilemmas where proceedings are more about PTA meetings than TWD massacres.

How quickly tight, close-knit groups – those initially bonded by survival needs and with long-standing loyalties – can be fractured is always interesting and disappointing in real life. We see that played out in immediate form here. In just a month (since the scenes of the Commonwealth soldiers’ arrival at Alexandria and made the offer to join them) those who fought alongside each other are now on opposite sides of the dinner-party…. some wining and dining, some serving, some relishing the rewards they’ve got and others languishing is ghetto accommodation.

It was good to see Daryl and Connie reunited at the tail-end of last week’s episode and there’s clearly ongoing chemistry that even Carol can see. Connie (Lauren Ridloff), who has stepped into the role of a journalist for what amounts to a ‘free’ press in the city, is interested in reporting more than the token ‘good’ news items she is spoon-fed but it’s clear there’s going to be an up-hill battle to relate anything that doesn’t show the Commonwealth in a welcoming light. Carol remains one of the savviest characters in the show, able to turn on a dime to evaluate her surroundings and situations. She’s suspicious of the Commonwealth but also acutely aware of the social ‘politics’ in play. Finding out that Eziekiel’s position on the waiting list for the lump on his neck means he’s likely condemned to a slow death, she doesn’t throw a fit or go charging in, but looks for opportunities to create favour and influence and seems to succeed.

Daryl might also feel better when he can grab a knife or crossbow and take down an enemy, but Mercer is demanding a more cohesive fighting-force and doesn’t take kindly to Daryl’s proficient but one-man-army conduct. The two find they have unspoken common ground in their dealings with Teo Rapp-Olsson’s Sebastian. Neither of them like him and both see him for what he is, but know they have to play along to get along. When Daryl has a chance to further humiliate Sebastian, he decides to pivot so that he – like Carol – can start to get favour and access to the information and situations that will keep them primed and ready for anything – both in the day-to-day and longer term plans.

The very inclusion of Sebastian Milton has a serious sense of foreshadowing. On the surface he’s just an annoying wannabee, a puffed-up inadequate riding his mother’s coattails with the kind of toxic entitlement that makes you welcome every bruise and humiliation he receives. However, those familiar with the source-material comic will know of the huge events that happened in the (un)dying days of the title and Sebastian’s part in them. Because of the differences between comic and series, those events are destined to play out in a somewhat different way, though the implications could be just as deadly, albeit with someone else in the cross-hairs.

For viewers less aware of the original story, it may not be possible to get a bead on Pamela Milton’s role as yet. Laila Robins plays a politician through and through – mention is made that her husband was once President – but whether her role in how the class-system in the city works for people like her but against others, is down to willful ignorance, duplicity or malice still remains to be played out.

Suddenly The Walking Dead is quite a different show in its setting – but, as always, the real monsters are often not the zombies but people themselves… 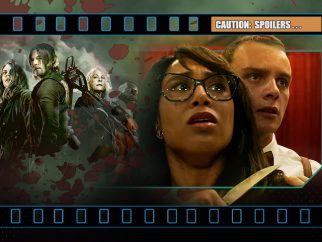