Boldly going with every detour it can find, this season's story-arc on 'Star Trek: Discovery' feels badly-paced...

Discovery heads towards the Galactic Barrier, but even before the ship and its crew get there, there are obstacles to overcome. President Rillack insists on joining the mission and there are also a number of other delegates who feel they should be there in a ‘first contact’ situation.

Burnham and Rillak try to establish some ground-rules as to the practical command structure on the bridge and Saru is momentarily caught off-guard by realising that President T’rina has also elected to be part of the mission – making their growing sense of companionship both easier and harder.

Book and Tarka are also seeking a way to cross the Galactic Barrier, but first Tarka will have to grab some special supplies… and that means confronting his past…

In the review of last week’s episode, I noted two things. One that the show’s over-all pacing continues to feel padded and that this week would surely bring some clarification on the threat behind the cosmic anomalies.

It’s frustrating that those two complaints remain firmly in play. It’s fine to have a ‘diversion from the journey on the way to the destination‘ entry between moments of high drama – and, indeed, the opportunity for some good character work is always welcome. But looking at the entire third season of Discovery so far it feels like a very vague but familiar story (not entirely different to last season’s cosmic deconstructions) is being drawn out well beyond its natural running-time and stretching even the better aspects of connective tissue.

Discovery’s trip beyond the Galactic Barrier (or through it, as we’re still barely out the other side by the time the end credits roll) feels like a Fantastic Voyage in design and execution, even the script referring to the floating ‘bubbles’ of safer space as being similar to blood cells. It’s fine to watch – the fading colour and the ticking countdown generate some tension for the bridge crew as they dart from one thing to another with the help of Stamets, VFX and well-placed technobabble. But it also feels like artificial delay to the story-arc that’s only three epiosdes away from completion and the kind of thing that the show could also have done in a single act in a faster-paced outing.

On Discovery, Burnham and President Rillak have to navigate the power structure with Michael insisting that they have to show unity and as Captain of the ship she has to have support from the people above and below her in the command chain. Rillak agrees but insists that, as President, she must have final say in how they deal with the wider threat beyond the ship. When an incoming but incomplete transmission arrives, revealing that the anomaly’s next destructive area will affect a lot of the Alpha Quadrant (ie: where the likes of Earth, Mars and Titan reside), there’s a disagreement on whether to tell the crew and whether it will increase their drive to find a solution or possibly fill them with despair.

Tarka (Shawn Doyle) and Book (David Ajala) are racing the Discovery to the Galactic Barrier but for the second time this season, need to stop off and get ‘fuel’ for their endevours and don’t exactly speed the plough to get things resolved. We do finally get some context to Tarka’s rather suspect story about using the DMA’s power to dimension-jump back to find his ‘friend’. Presuming that he’s still not an unreliable narrator, the ‘flashback’ shows him as a somewhat untrustworthy individual. We see him held in captivity and apparently forced to work alongside another prisoner, Oros (Osric Chau), using their collective intellect to develop new technology. Despite an awkward and stand-off-ish beginning, Tarka and Oros eventually start working together and then become friends, the relationship becoming a strong emotional bond. However when some of the prototype experiments – such as that dimension-jumper – fail to work, it’s revealed that Tarka was sent in to find information and ultimately betray Oros. In the end he can’t do it, but in their one chance of escape, he can’t physically manage to carry Oros with him. He’s forced to leave him behind and when he returned Oros was gone…. vanished after a power-surge but having left their secret symbol behind. Despite repeated visits back to the now abandoned base, Tarka has never been able to track exactly what happened but is haunted by his actions.

The flashback is welcome, but it lacks the intended emotional wallop that some previous Trek incarceration / moral quandry stories have presented. That could be because Tarka has not been a very sympathetic character since his introduction and one simply defined by his own arrogance. We’re also only meeting Oros for the first time and so the friendship/bond/love that develops between them hasn’t been given time to breathe nor given the audience time to invest.

It’s notable that the most engaging story here is the handful of scenes with the drip-feed courtship between Doug Jones’ Saru and Tara Rosling’s Vulcan President T’Rina.  It’s quite delightful to see the moments of formality pushing against those of a less formal connection and though it might well still end in tears, it would be good to see such a pairing develop slowly over time, even if never becomes a romance.

Scattered among the forty-four minutes of running-time are minor scenes that seem like house-keeping, but it remains telling that guest-stars all are all getting better development than some regulars. Adira (Blu Del Barrio) returns with a throwaway scene and some more lines explaining Gray’s absence (after being a major story and an example of the show’s commitment to diversity, they’ve largely disappeared from view for many episodes). Whether it’s down to COVID – which stopped Tig Notaro from being as involved as usual – the show seems to be shedding regulars at a pace. The supporting Bridge-crew get some complimentary lines and Lt. Commander R.A. Bryce (Ronnie Rowe, Jr.) goes off to work with David Cronenberg’s Kovich on something more important. (MORE important? – hard to tell if this is convenient shorthand to lose them from upcoming episodes or if there’s genuinely something of more importance than trans-dimensional destruction on the event horizon).

Again, Discovery – the vessel – is Star Fleet’s flagship, able to zip almost anywhere in the galaxy at a moment’s notice, seems in an eternal cycle of hurry up and wait… and the lack of delivery in Discovery – the series – or any real development on the mysterious  Species 10c (after almost a whole season we still know zip about them, or as much as we did eight episodes ago) could well be setting up the season for yet another ‘really, is that it?‘ climax that can’t live up to the long haul to get there…

Still, from this next week onwards, the next three weeks will have new episodes of both Discovery and Picard to keep Trek fans happy… 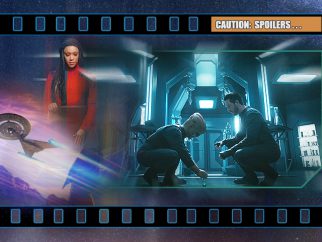