A Cat and Mouse Trek, but Discovery doesn’t cross its ‘Rubicon’…

There's a 'sudden but inevitable betrayal...' that stalks Discovery's latest and that means it can't quite deliver...

The race is on to stop Tarka and Book from detonating the bomb that might save the galaxy or strike a pre-emptive war-footing against a vastly superior species. Star Fleet knows that Discovery is the best ship to chase them down, but also that Michael is likely to feel conflicted if the only option is to destroy Book’s ship rather than let it escape or fulfil its own mission.

But in a game of cat-and-mouse, anticipation is everything. Michael and Book have enough shared history to guess each other’s strategies – but does anyone know enough about Tarka to know what he’ll do when backed into a corner?

This is one of those episodes that cranks up the tension through a series of effective stand-offs, a cat and mouse chase and game of military strategy between Discovery and Book’s ship… and all seemingly pointing to an equally dramatic resolution. Burnham, who – let’s be honest – would never really be allowed within a light year of helming such a mission due to obvious conflict of interest, is forced to dance between her feelings for Book, the fact that she knows he’s a decent man who doesn’t think he has any other options and the pragmatic imperative from Star Fleet that Book’s ship must be destroyed if he doesn’t stand down. The influence of a driven Tarka, a man far less willing to listen to Burnham or her assurances and the presence of Commander D. Nhan (Rachael Ancheril), there to assure Burnham puts her duty ahead of her feelings, both act as template barometers and the opposing poles that pull and push on the couple’s loyalties and decision-making.

If allowing Burnham to captain the mission is beyond unlikely, making Nhan the ‘leash’ of the equation feels more like the production seeing an opportunity for a returning character rather than Nhan being a great or obvious choice. Most likely a formal Star Fleet presence wouldn’t be someone who was on such good terms with the Captain and whose own influence might be questioned. That’s one of the other inconsistencies with the current run – you can’t have Burnham be the deniable, backdoor political solution every other episode and then have her conveniently restrained by those self-same forces as the week’s story requires… even the internal logic hypocrisy starts to fracture.

Tarka’s actions and attitude and decision to pre-emptively launch his bomb (which might as well have been a literal big red button on the console) was somewhat inevitable. If the historical significance of the episode’s title wasn’t a big enough clue, Shawn Doyle‘s character has largely been painted in broad strokes that ensure a ‘Curse you and your sudden but inevitable betrayal!‘ moment was simply a matter of time. Given we’re just waiting for it to happen, it’s not a huge disappointment when it does but nor does it generate any surprise. Except to Book… which makes his character look rather stupid).

The added problem with ‘Rubicon‘ is that the climactic moment which should be ‘shock and awe’… isn’t. The story doesn’t do a drum-roll or trumpet crescendo but essentially shrugs and shuffles off-stage. It’s like lighting a Mission Impossible fuse only for it to fizzle and splutter. Okay, there is, technically, a genuine explosion but given that it’s conveniently contained and viewed from a distance, it’s less an epic fiery denouement and more a cosmic sparkler.  This should be the moment where the audience shifts nervously wondering about the repercussions. Do the events ignite a cosmic war? Well, not yet. Is there a sign of counter-response from Species 10-C? Well, not really. Are Booker and Tarka (especially the latter) held accountable for his actions?  Magic 8-Ball says ‘Check back later’ given that they scarper between scenes. In fact, even the destruction of the device is rendered moot when a replacement immediately appears at the exact same spot, rather undoing the tension and efforts. Burnham and Star Fleet acknowledge at the end of the episode that the anomaly’s reaction could represent a ‘first contact’ of sorts, which should prove interesting, but while the implications are big, it does render most of the episode’s events as an extended runaround.

The cast do well enough with the material they have, but it definitely feels as if there’s the illusion of change rather than momentum. It could be that the consequences (which must surely bring a drawing back of the curtain and more details of Species 10-C next week) are worth the build-up and that this is the calm before the Sturm und Drang but what could have been saved with a great reveal seems or alien entrance seems more like extended set-up than pay-off. 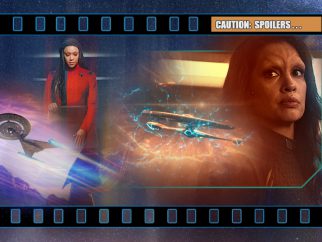 The ‘Eleventh’ Hour. All good ‘Stranger Things’ must come to an end…