More crimes of fashion than a Keyser Soze cornerstone, NBC's 'The Endgame' is stylish but very silly...

The FBI has been looking for a way to bring down international criminal mastermind Elena Federova and it seems that their hard work has paid off. But in a top-security facility, Federova seems pretty nonchalant about her new surroundings and the demands for her to co-operate.  Miles away, a bank is hit by a well-trained group who immediately take hostages. Then there’s another bank hit. Then another. They don’t have any immediate demands but they do have a message for the FBI.

Bow to the Queen.

And Elena Federova is ready for them to do just that. She’s exactly where she wants to be. Now, to get what they want, both Elena and the FBI appear to need the services of an agent named Val Fitzgerald. But Val has her own problems and as she starts the day she has no idea how much Elena is in a position to shed light on them…

The word Endgame has long been a military term to do with the aims and pay-off a long-term strategy. It can hardly go unnoticed that it’s also been used as a moniker in various cinematic outings in search of just the right noun. As well as the obvious Avengers: Endgame blockbuster, there’s been Highlander: Endgame and countless episodic entries for tv shows. So it’s disappointing that The Endgame, the latest addition to Wednesday night primetime, wastes the definitive ‘The…’ of the title and instead just feels like it’s a derivative mess, an AI-generated premise assimilated from past productions rather than an actual living, breathing writer’s room.

Oh, there’s a glimmer of a good show here, albeit as a guilty-pleasure candidate… there’s always something innately joyous about watching over-confident, bureaucrats get taken apart by the very target of their condescension and series lead Morena Baccarin does so without breaking pace or sweat, performing a tango when almost everyone else is merely shuffling. Ryan Michelle Bathe as her adversary, FBI agent Val Fitzgerald, is equally dynamic and driven, the sharp-shooting, smart and savvy law enforcement officer who has equal disdain for her ‘superiors’ after they punished her career for her husband’s crimes, despite her going by the book when it happened. The show’s wardrobe budget is clearly better funded than some dynasties, every so often a piece of dialogue will sing or a bit of misdirection will pay-off well (there’s one genuine pivot that comes as a well-crafted surprise) but – sadly – for the most part this is the typical NBC entry that seems doomed to a one-and-out run simply because the premise is both familiar and flawed.  It’s a pitch not a series, a clotheshorse not a thoroughbred.

Originality and risk-taking is hardly a common commodity for networks who rush to follow trends and place their money on safer-bets.  But there’s playing safe and merely cloning. The fact is that this is a show so similar to The Blacklist that if it was an official spin-off it would still speak to opportunism and an embarrassing lack of originality. That it’s a show that comes from the same network as the James Spader-driven show but has no connections to it, just speaks to abject laziness: a result that’s template not tentpole. You can hear the pitch of ‘The Blacklist meets Killing Eve with a bit of 24…’ echoing through every familiar scene, but changing the gender of the central character and agenda of the main antagonist doesn’t create anything but reflected glory.

All television dramas deal with a certain sense of heightened reality. Things need to happen that are big enough and regular enough to keep people watching, avoiding the mundane or slumps in the narrative…so timetables are moved up and the stakes rise on a weekly basis. It’s petty to nit-pick such elements too much… primetime is, after all, escapist entertainment of one hue or another. But even given that caveat, The Endgame deals with Olympic levels of mind-boggling convenience, contrivance and absurdities that speak to style over content and being a case of ‘Don’t look closely, just go along for the ride…‘.  Sure, we can overlook that Baccarin is so cool and collected that she can be captured, imprisoned and interrogated and doesn’t get a single hair out of place or single crease on her spectacular catwalk dinner dress… and somehow remains her wardrobe throughout. But we’re also asked to believe that Baccarin’s is SUCH a criminal mastermind, that she can organise her powerbase to such a degree that she can orchestrate seven simultaneous bank jobs simply to deliver a conversational demand to her captors at the very second needed to turn it from threat to royal punchline: Bow to the Queen.

As noted, the on-screen talent is fine. Morena Baccarin ably gives it her all and delivers the needed playful/icy coolness of a cat playing with its food before deciding the entre – even if the script sometimes falters. Her Elena Federova (which seems like a name from a Rocky and Bullwinkle off-shoot) is a fun character, but one that only works on comic-book paper or as a banter-ready 007 femme fatale. Here, every movement – be it swishing of dress or arching of eyebrow seems too big for a tv screen, but too small for a soundstage. Bathe’s troubled FBI agent seems an amalgamation of demographic-infused bullet-points: a black woman forging her way through a still intransient Bureau and realising that her success and failures have wider implications;  an agent who’s prone to say what she thinks and go against her superiors and a woman who wants to stand by her man despite his incarceration. If later episodes introduce a gay best friend and a shelter-rescued dog, it couldn’t be more of an approved checklist.

The Endgame isn’t awful – it’s just awfully familiar in every respect… and despite its leads, it seems doubtful there’s anything to really excite anyone looking for more than a time-filler or an audience that’s finding far better treats on cable… 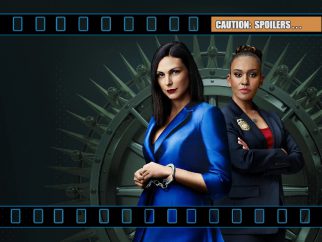