As the arrival of Layton and Zarah’s baby draws near, both parents are concerned about what might have been done in the name of scientific experimentation rather than pure ‘health’ reasons, but with the whole train waiting for news, it’s all in the hands of the mother and the doctors, even with their conflicting outlooks.

Layton wants to be there for Zarah but there’s always some kind of emergency, trauma or conflict aboard the train. With a celebration going up in flames and a bomb threatening to stop Layton getting back to more pressing paternal matters, it seems like the day may be remembered as much for the wrong reasons…

The birth of a child is a wonderful thing, but on Snowpiercer it’s another reason for serious drama, high stakes and an hour of tension-building on an emotional level. Just how dark is the show willing to go?

There’s certainly a lot of potential foreshadowing from the start of the episode. We get an interconnected montage of images of Zarah’s pregnancy and possible problems during delivery. At first it feels like the episode is speeding through events until we realise that these are glimpses of what’s to come and we flash back to ‘twelve hours earlier….‘ Any time someone is about to undergo a major life-threatening challenge and pens a ‘just in case’ missive – also acting as the de facto ‘one thousand and twenty-nine cars long‘ opener – one should shift uneasily and wonder if we’re heading for Top Gun levels of tragic bad timing. So when Zarah (Sheila Vand) writes a note to her future daughter, we have every reason to worry.

As it turns out, the birth is difficult but goes well enough – there’s still some unease about the genetic manipulation done to the child in-vitro and certainly plenty of accusing figures pointed towards Sakina Jaffrey’s Dr. Headwood, but at least as things stand, the train has some good news for once.  Of course, amongst the partying, there are mixed feelings amongst some of the crew. Wilford is dosed up in the medical car and probably would see the event only as a triumph on a technical level if he was coherent (though perhaps he’s somewhat faking the slow speed of his recovery?).  Josie (Katie McGuinness) has every reason to feel conflicted. It was somewhat uncomfortable to see she and Ben (Iddo Goldberg) getting together. Yes, the show makes a good enough case for the two finding sympathy – and more – for the trials and tribulations they’ve faced. Josie has lost Andre Layton to Zarah, the mother of his child – a fact that she’s reminded of every hour as the countdown to the birth is tannoy-ed through the carriages. Ben, devoted to Melanie and still technically clinging to the merest hope she could be alive, is starting to accept she’s gone. It is, after all, over six months since Melanie was left behind with only minutes of air and heat left. It’s all… understandable, but feels like it’s the show setting up a ‘Surprise, I’m back!‘ moment to come with Mel. Though it would be great to see Jennifer Connelly back full-time and in the flesh, the resulting love triangle might well feel like just another angst-filled relationship and risks becoming soap-opera-esque rather than dramatic.

Lena Hall’s Audrey is an interesting character that’s been somewhat sidelined since she apparently chose the wrong side and aligned with Wilford. Though it’s been an opportunity to look at abusive relationships and the power that people have over others, damaging them in permanent ways (physical or mental), most viewers seemed to feel it would have been far more satisfying to have Audrey be a torch-song temptress who was playing the long-game ready to turn on Wilford after his previous abuse. Instead, she’s the collaborator and compromised courtesan and now a shell of her former self. It’s somewhat bizarre that his paramour is allowed any free movement on board Snowpiercer given her history and her skillful arts of listening / manipulation. Till reminds her that it was not that long ago that Audrey was the high-flying figure-head of the Night-Car and used her abilities to calm and soothe rather than the sad, Stockholm-syndromed figure that wanders through the dirtier and lowly places on board the train. Maybe that’s what leads to her musical lament towards the end of the episode – reminding us that Hall is an award-winning musical star – though it’s hard to see how such an untrustworthy character will ever rise again. (That being said, changes in fortune and priorities are something this show does well and regularly).

The series of bombings aboard the train is one of those threads that you expect to stretch out, but it’s once again an element that Snowpiercer doesn’t want to tease you with for long. Adding some difficult layers to the budding Pike/Ruth relationship, we find out that it’s Steven Ogg’s Pike who has been setting the explosions/fires, largely because he doesn’t feel that Layton deserves the role as leader. He’d be quite happy to work under Ruth (in more ways than one), but it’s doubtful that once the truth is out, Ruth (Alison Wright) will feel inclined to take his side. Ogg has made a career out of playing memorable villains with dangerous complexities – such as his run as Negan’s right-hand man Simon in The Walking Dead – so there’s little doubt the show will be adding fuel to that fire in the next week or so.

Amongst the darker elements there’s nice, quieter moments. We see the naming tree shine (before it burns) and the tradition of a child’s name being picked from the choices or from the nearest town/city en route sees Winnie/Winnipeg (Emma Oliver) play an enthusiastic part. Chelsea Harris as the scarred security officer Sykes also plays a subtle role in getting Avi – still devastated by the PTSD of Wilford setting his rottweilers on him – to work through his trauma. Wisely and with a definite truth to her words, she notes that you can’t blame a dog for an attack for which he’s been trained by a bad person – it’s wholly the owner’s fault for creating a behaviour that isn’t natural. In that sense, Avi (Roberto Urbina) can finally work past the visions of the dogs that haunt him and understand that his ‘enemy’ is Wilford not the canines. It’s sadly a lesson that is relevant in the real world with the way some people treat their animals. 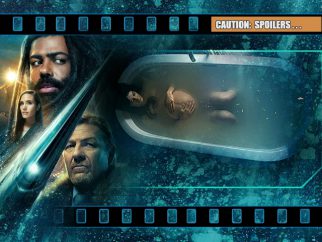