Venom's symbiotic sequel has all the Carnage but relies too much on punch-ups and punchlines...

Eddie Brock is still  a down on his luck reporter. Every so often he gets a break, but it never seems to break in his favour. He still pines over lost love Anne, still can’t get a great news-story and… yes… he’s still the host for a symbiote that wants to eat people. Or be a crime-fighter. Or both.

When notorious serial-killer Cletus Kasady offers Brock an exclusive, Brock can’t resist, though he’s determined not to play into the killer’s demented ego and the resulting front-page story in the Daily Bugle is not to the prisoner’s liking. During a confrontation, Kassady bites at Brock’s hand and draws blood. Only Cassady instantly realises this is not normal blood. Heading to Death Row, Cletus has nothing to lose and feels the power of a new symbiote streaming through him. It’s pay-back time.

From start to finish, the Venom sequel is a film that doesn’t take itself remotely seriously, instead providing a conveyer-belt of chaos… and so your enjoyment will largely be based on your expectations going in. Looking for some disposable fun and cartoon carnage… you’ve come to the right place. However, anyone expecting a top-notch Marvel Studios outing will largely be left shrugging at the result: CGI-heavy yet paper-thin on any real character-development. But this is strictly Avengers adjacent, the sub-categoried SONY-controlled annex of the MCU, usually allowed to make the odd tangential connection or easter-egg but little more (unless you’re Spider-man). So, Venom: Let there be Carnage is basically Deadpool without the profanity and Spider-man without… well, Spider-man… an outing that isn’t family-friendly (there’s a mite too much blood and splatter for that) but is also neither deep and meaningful nor the R-rated enterprise some had originally hoped for when the films were announced.

For a while the symbiote was one of the most significant villains in Marvel‘s monthly comics (a far darker origin involved him taking over Spider-man / Peter Parker before its identity was discovered) but in the years since has suffered the ‘Wolverine‘ factor on the printed-page – in the sense of being over-used, being drafted in as an anti-hero for ‘stunt’ issues to bump other titles’ sales rather than waiting for the stories that better suited his specific kind of anarchy. But for the movies Venom is largely NBC‘s 80s’ series ‘ALF meets modern UFC‘ – an aimless alien determined to munch down on inappropriate life-forms if allowed and then getting into all sorts of problems, punches, punchlines, pratfalls and symbiotic slapstick in the process.

A large percentage of the feature is the banter between Venom and Eddie, with Hardy voicing both, creating a  fun but bizarre back-and-forth as they argue ethics, pragmatism and matters of love. This usually results in raised voices and furniture being thrown around and occasionally some bad guys getting in the way. That was probably the entire pitch.

Hardy is often an under-rated, versatile actor, mainly known for his hard-men hits, but also a creatively interesting performer, one willing to take all kinds of risks if the material warrants it (we’re still waiting for season two of the edgy Taboo). Here, though, it has to be said he’s largely coasting, having fun and cashing the cheque while giving us the quips and sardonic dialogue between symbiote and host. He actually provides both sides of the vocal equation as Venom’s voice is also Hardy’s, just with Cher-levels of distortion and a script that relies on delivery rather than the content, but it is quite bizarre to watch the internal dialogue made external, like some psychosis made flesh.

Woody Harrelson’s Cletus Kasady is the villain of the piece and feels like a Looney Toones version of his own Mickey Knox, the on-the-rampage fugitive in Oliver Stone’s 1994 feature Natural Born Killers.  Harrelson cackles, contorts and generally wastes no time in chewing the scenery as a convicted killer with an axe to grind, a lip to sneer and tentacle to extend, all the time wise enough to know that all the film’s selling-points will be achieved in post production. Juliette Lewis played the female half of the fugitive duo in Stone’s film, but instead of  ‘Mallory Knox’, it’s Naomie Harris (James Bond’s current Moneypenny) who provides his paramour, Frances Barrison aka Shriek.  It’s a weird combo, an alien symbiote weakened by sound and a girlfriend with a mutant (can we officially say mutant?) ability to unleash sound as a weapon. That contradiction tries to be a story element, but it never quite gets fulfilled as a premise. There’s support from the returning Michelle Williams as Brock’s ex Anne and Reid Scott as her fiance, Dan who largely deliver the straight lines to the jokes, though Williams does get some choice lines along the way.

It’s a shame that a film directed by king of motion-capture Andy Serkis, really doesn’t join those particular dots with the expected flair. The visual-effects feel fine but not inspired, somehow grubbier and more forced than streamline and organic. The film rises or falls on them and though swinging through the skyscrapers, streets and rafters with assorted tendrils is fun enough if you can grab beer and pizza with which to watch it all, the battle-scenes between Venom and Carnage feel like exactly what they are, a variation on a well-worn theme that needs to be more than the rough-and-tumble decoration that just holds the film together.

The most ironic aspect of the film is that a majority of the coverage will likely be about the post-credit scene. We won’t spoil the specifics here, but there’s certainly some implications for Venom‘s connectivity with the MCU, though how that will be played out could still go a number of ways. Perhaps there’ll be the second-part of the Venomous punchline come December..? 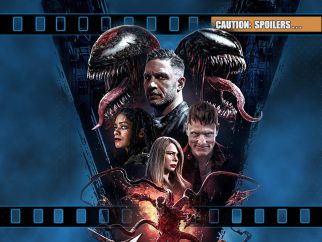