When Kristen’s daughter Lynn (Brooklyn Shuck) is baby-sitting , she realises that the boy she’s left in charge of seems to be in the sway of a clown-like doll… with the boy scared of not fulfilling Eddie‘s every wish. There’s a distinct similarity to the one that Grandma Sheryl has in the annex at home and when things get even more creepy, Lynn is compelled to take it home. Meanwhile – and elsewhere – Sheryl herself is made an offer she can’t refuse (or chooses not to).

Elsewhere Kristen, David and Ben investigate strange-happenings at a house where the surviving members of a family – a father and son – are being haunted by dark figures… and where ben disovers a trunk in the attic. Inside the trunk… is another familiar looking doll.

David is continuing to ask himself some serious questions about his feelings on matters heavenly and earthly and whether he should become ordained or fight evil in a different way. With the ease that Leland is ingratiating himself into the church for subversive purposes,  David wonder about other avenues  – even if Sister Andrea is having none of it.

Dolls have always had their place in the horror genre. There’s something innately creepy about a child’s accessory, one that’s supposed to be comforting, yet stares out at the world through unmoving and emotionless eyes. Whether it be Chucky, Annabelle, The Boy or the magician’s dummy from Anthony Hopkins’ 1978 creeper, Magic, a doll can project evil without a single point of articulation.  So it’s really no surprise that Evil has been weaving in a thread involving Sheryl’s obsession with a doll she calls Eddie, occasionally making small monetary offerings to keep him ‘happy’  What’s largely been an uh-oh plot-point until now, starts to become seriously worrisome when more than one ‘Eddie’ doll appears to be in existence, but each having a dark effect on their owners’ behaviour. Before the end of the episode there’s two such variants in the Bouchard house – thanks to  and that can’t be a good thing.

David (Michael Colter)  is having something of a crisis of faith as his ordination draws near. On one hand he’s seeing some of the hypocrisy at work in the church and its upper echelons. He’s conflicted between his innate faith and the question of whether he can change the church or whether it will simply use him as window-dressing.  He also sees an attraction in doing God’s work outside the church and in institutions that are more pro-active and less-restrained. David is still very spiritual, but wonders what avenue to take. Sister Andrea’s is having none of it, though. She tells him that they can put all their personal feelings aside because the battle between Good and Evil is a real one with a tipping point coming and that people like she and David don’t have the privilege of standing on the sidelines.  Much as you want David to have a good life, it would be hard for anyone to refuse Sister Andrea’s rallying cry. (And it’s great to get some back-story on Andrea, as so wonderfully delivered by actor Andrea Martin, though one expects there’s much more to tell) God, I hope she survives next week’s episode….

There’s also – finally – something of a heart-to-heart between David and Kristen, a kind of ‘all-cards-on-the-table’ situation but lower-key than you might have expected by now, with a ‘IF things had been different, but they’re not..‘ outcome. The word ‘love’ is used pretty freely and Kristen admits she and David might well have been in love under different circumstances. That always seems to be the all-or-nothing tv show language whereas real life has many more shades of grey. There’s been every indication of deep respect and attraction between the two, but ‘love’, in the way it’s discussed, seems a bit of a jump, especially as she’s actively trying to mend fences with her husband Andy. It’s more like an undeniable connection but the short-hand works for dramatic purposes.

Sheryl’s story continues to be scary, but hard to get a handle on in its elements of submission and control. While Christine Lahti’s Sheryl is fascinating – one minute firmly in control, the next having her will subtly subjugated by askew influencer Edward Tragoren (Tim Matheson), you never know which way that power-play will shift. It’s like infernal realtors or car insurance salesmen vying for profane top-dog status and going high or low as needed in the moment. There’s one deliberate wrinkle in the ‘Sheryl’s gone to the dark side’ plot-line in the inclusion of a statue of the Virgin Mary near Sheryl’s shrine and her meditation with the two Eddies and the shrunken head (yes, that’s one sigil I could live without seeing again)  as she invokes the Father, Son and Holy Ghost… which could be a corruption of the Church prayer or quite the opposite. I guess, we’ll know soon enough.

Aasif Mandvi’s Ben still gets many of the show’s best lines. Though a more rogue Exorcist (and this season’s had it’s share of that vocation) arrives in the shaggy form of Gregory (Michael Laurence), a mixture of surfer dude and Christopher Lloyd’s Taxi character Reverend Jim, it’s Ben that makes the scenes with him work.  When Gregory condescendingly asks ‘Do you know why there’s no infestation in abandoned houses?‘ it’s Ben’s retort ‘Because there’s no one there to notice them?‘ that sells the absurdity of it all.

Kristen’s family are delightfully grounding and ‘real’ in many ways, but it’s sometimes hard to remember which daughter is which. (For the record, Maddy Crocco’s Lexis is the one with the possible tail and it’s Brooklyn Shuck ‘s Lynn that’s on doll-duty this week. Dalya Knapp’s Laura and Skylar Gray’s Lila will have spotlights on their own dramas before long, one suspects). Kurt Boggs as Kristen’s psychiatrist (also called Kurt) has more to do this week as he tags along with the trio with an idea of writing a book about the conflicts of science and faith, but gets a little more than he bargained for when he sees Gregory perform the exorcism and then later comes face to face with a demonic creature. The series seems to have zig-zagged on finding a role for Kurt other than occasional sounding-board (to the point one wondered whether Kristen’s paranoia about his loyalties had some substance), but it might be interesting to have him onboard as a regular rather than a recurring presence.

Next week is the second season finale and while there’s no chance that all of the many plot-threads will be addressed, never mind resolved, it will  be interesting to see if the Kings (showrunners Robert and Michelle) can finish this latest run with the same dramatic flourish, insightful balance and royal flourish. 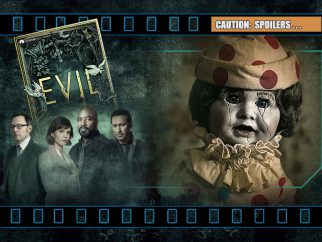