Bland rather than bad, a template-paced 'Morbius' proves in a similar vein to SONY's other Spidey spin-off 'Venom'...

Since birth, Michael Morbius has struggled with a rare blood-condition that leaves his mind sharp but his body weak. Even as a child he swore to fellow-sufferer , ‘Milo’. that he would one day find a cure for them. But while Morbius is whisked off to a private school that deals with special kids in upstate New York, ‘Milo’ finds himself bullied and left alone. However, the pair’s friendship continues from a distance and by the time they are grown men, Morbius remains hard at work, rising through the scientific community and even refusing a Nobel Prize. ‘Milo’ remains insular, amassing a large fortune but lacking the ability to leave his apartment.

When Morbius takes a giant and likely illegal leap by developing a serum based on bats and using Milo’s fortune to help fund it, his condition seems miraculously cured, but there are deadly side-effects that he can barely control. Along with increased strength and speed he now has an insatiable need for human blood. Milo sees it as miracle, Morbius sees it as a curse…. but when exsanguinated bodies turn up around the city, the hunt is on for a ‘vampire’…

Though its release-date was largely a result of the COVID situation, when a film is delayed as long as Morbius, it really doesn’t do the film any favours. Either expectation rises to an unwieldly degree or the rumour-mill of problems demands a savage vivisection long before a frame is seen in the multiplexes.

Morbius, truth be told, may not be remotely great but is probably nowhere near as bat-shit bad as you might have heard in advance. Agreed, it’s not remotely on the scale of the current mainline Marvel Studios output and its fault-lines are obvious for all to see, but as far as the SONY arm of the Marvel Universe goes, this generic tale of amped-up vamps feels like someone saw Blade and wondered how it would fare without all the martial-arts… and the result probably settles in between Venom 1 & 2 in relation to quality and guilty pleasure potential. It’s essentially a throwback – a rather generic tale told with some significant names attached, all cashing their cheques early … the visual-effects being the only clue that this isn’t a decade-old project that’s been dusted off for distribution.

The visual-effects are decent enough if somewhat non-sensical, fitting a story remit that doesn’t always make a lot of sense. The faces morphing between human and emaciated, almost skeletal structure look fine, but like many a ‘monster’ it’s actually better when there’s only a flicker of change rather than a full-on transformation.  When Morpheus and his nemesis move beyond primal blood-sucking and learn to actually fly and swoop through the cityscape, it becomes little more than a battle of pixels. The sonar effect is fine and a swirling column of bats that swirl around the main character both in and out of caves look great but we’ve seen it before in the real Batman. There’s a lot of scenes straight out previous playbooks but what’s missing is the real, dynamic mood-setting because after the first act there’s plenty to see but not a lot in which to invest.

Say what you want about Leto and his take on the Joker – and people certainly did – but at least there was something vivid and distinct delivered. Here Leto’s Michael Morbius seems a template character that we’ve seen before, a man perhaps literally uncomfortable in his skin because of the medical condition but with Leto unexpectedly a little too comfortable in execution. There’s nothing distinctive here and Leto, well known for edgy roles and performance choices, seems on autopilot, happy to cut a solemn, emo’d figure but only occasionally delivering that needed flash of humour and menace. A scene where he almost narrates the action – taking over and running-off a group of dealers from their lab so he can use it – works okay and the ‘prestige’  has a nice pay-off when he’s asked his name and he says ‘Venom‘ but otherwise the script and dialogue muddle along in wholly unholy predictable beats.

Matt Smith’s debut in Marvel territory doesn’t fare as well as his Doctor Who companion Karen Gillan’s cosmic route, but you can see why it probably looked good on paper. For a while Smith is allowed to play his ‘Milo’ with a genuine sympathetic bent, a tired man in tired body with understandable reasons for having lost faith in humanity because of the way it treated him and is resigned to an early death. The ‘young’ Milo scenes indicate the darker impulses he’ll embrace, but in another take, he could have been the one directly finding salvation and redemption, the hero of the tale. Again, the film makes it understandable that the possibility of a better life is an intoxicating  and irresistible temptation regardless of the consequences. But despite some attempted misdirection as to the killer of a nurse in the hospital, it’s fairly clear that the film doesn’t want to tarry with nuance, it needs ‘Milo’ to be the outright, stereotypical villain and so he obliges, becoming the gurning, swirling maelstrom that provides Michael with a mirror as to what he wants to avoid. Smith does the best he can providing a little too much arch in the arch-nemesis, but not for lack of trying.

Adria Adjona  (Good Omens‘ Anathema Device, 6 Underground and soon to be seen in Andor) is fine as Michael’s confidant and bio-chemist partner Martine Bancroft who makes a fairly dynamic impression for a character initially written as a damsel in distress, but the film really doesn’t know what to do with her once she’s established herself.  Equally, the always reliable Jared Harris is largely wasted in a mentor role that is earmarked as collateral damage.

The supporting players, many of them familiar faces, really don’t get any room to shine. Tyrese Gibson (Fast and the Furious) and Al Madrigal (The Daily Show) play two agents who are investigating the exsanguinated bodies found in the city, but serve as little more than furrowed-browed light relief, their banter going nowhere and they’re notably downplayed as we reach the climax in a way that suggests a lot of their material was snipped away. On the same note, those pondering how Michael Keaton’s Adrian Toomes / Vulture fits in – don’t. The actor’s appearance in the trailer got people talking about how the Tom Holland-era Spider-man character was going to fit in to SONY‘s corner of the landscape but the trailer wholly misrepresents that inclusion. With his other scenes cut from the main story (the trailer footage is nowhere in sight) and absent from the entire movie until its dying seconds and a mid-credits extra, Keaton’s presence now seems like an afterthought, a vague hand-wave and small nod-sized easter-egg that doesn’t even reach the description of ‘cameo’. It’s a half-hearted nod to the multiverse problem created in Far From Home but doesn’t even fit into that aspect that well. Toomes is randomly transported from the MCU into a jail-cell in the SONY-verse and released when no-one can work out who he is or why he’s there… and then somehow creates a whole new Vulture-suit to tempt Morbius into joining up with him. That doesn’t even seem consistent with what we know of the wider ‘Multiverse’ spell and recent reality-jumping, but may act as a set-up for a sequel or a Sinister Six spin-off if this film does well – Magic Eight-Ball says ‘Don’t hold your breath‘, especially as that concept basically played out in Far from Home.

Directed by Daniel Espinosa (no, not the character from Lucifer), Morbius has the feel of a movie promoted beyond its niche, unable to compete with the sheer box-office bravado of the mainstream MCU and instead scurries around the edges. But in playing to genre-pattern, albeit messily, it’s also one that’s far too comfortable with that genre formula and one that would likely benefit from simply a better, edgier cut of the material. Perhaps somewhere on the multiverse’s cutting-room floor there’s a reality in which the perfectly serviceable story flowed better and the supporting cast were better served. Sadly, in this one it’s more of a beer-and-pizza ‘don’t ask too many questions‘ outing that would have made a better DVD or streaming release.

It’s bland and predictable rather than bad and derisible, but if it doesn’t completely suck, neither does it have the necessary bite. 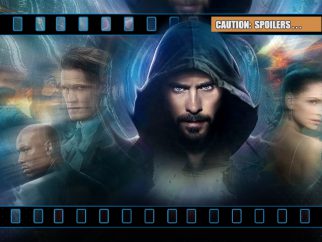