It's a war of deception and diplomacy as Hornsby demands entry to Maggie's compound, but is it a Hill-Top to die on?

Aaron and Gabriel may have survived recent events, but now they have to explain that survival to the man who was secretly behind much of the chaos. Hornsby does not want to be on the losing side of any equation and if that means taking his troops to the Hill-Top to search for survivors and his lost arms shipment then he has no problem doing so.

Daryl knows that everyone has their fingers on triggers and wants to avoid any unnecessary bloodshed. But when, in an effort to find the truth, Hornsby turns his attentions to young Hershel, Daryl and Maggie may have to forego any more pleasantries…

As begun last week there’s a lot of people walking around, flexing their muscles, talking with faux niceties and smiling with gritted teeth – everyone knowing the lie but doing their best not to acknowledge it as they seek the upper hand.

Hornsby (Josh Hamilton) is rapidly becoming the mover-and-shaker bad guy, Pamela Milton’s fixer but likely acting a lot on his own rather than at her behest. His personal need to expand the Commonwealth’s reach by dominating Hill-Top, Alexandria and Oceanside for his own purposes becoming am escalating problem as the dominos fail to fall before him and the need to keep direct deniability from his door. So, in the wake of last week’s ‘wetworks’ operation gone wrong – the one that ended up with Toby Carlson (Jason Butler Harner) dead and Negan’s group vanishing into the forest – Hornsby is looking for someone, anyone to blame other than himself. He doesn’t believe Gabriel (Seth Gilliam) and Aaron (Ross Marquand) and their versions of how they survived the events…just as they know he doesn’t believe them ( and the ‘discussion’ sequence works on both a dramatic and humorous level as the avoid explaining the real series of events) but if they can keep the lie up without any firm evidence to implicate them in Carlson’s demise, then all parties have to look each other in the eye and bide their time. It’s with that in mind that Hornsby sets out to Hill-Top to politely knock on the door and ask Maggie if he can check if any of the fugitives sought sanctuary inside. Or to be more accurate, to turn up at the Hill-Top, ask politely and then remind Maggie that all his men are heavily armed should she not immediately acquiesce. Which, of course, brings us back to that flash-forward we saw at the end of the first third of this final season – and Daryl trying to keep the ‘peace’ going as long as he can, by convincing Maggie to open the gates…knowing timing will be everything. There’s some tense moments as he snoops around and some nice pacing and direction when an old car starting or not provides the crux of tension and a potential power-shift.

Things break down towards the end with pleasantries briefly put aside and a stand-off and guns raised… mostly thanks to Hornsby trying his ‘influence’ on young Hershel. Just as threatening kids was the red line for Daryl when Sebastian tried similar maneuvers to get his way, Maggie also expresses her displeasure and for a moment it looks like a major firefight is about to erupt with Daryl happy to take down some of the Commonwealth soldiers and Hornsby if he has to. Daryl ultimately manages to talk things down – also at holding a rifle on Hornsby and handing out one of the season’s allocated ‘fucks‘ in the dialogue – but it’s clearly the tipping point and even if Hornsby goes back to Big Bad Wolf smiles thereafter, the facade is broken and we know full well that next week’s season’s finale is going to involve very little shuttle diplomacy because Hornsby’s ego has been tarnished and he’ll want retribution for the embarrassment.

Elsewhere we see a burgeoning relationship between Princess (Paola Lázaro) and Mercer (Michael James Shaw), with the former feeling happier and more settled than her previous out-in-the-wilds extremes and the latter wrestling with the fact that the Commonwealth he’s guarding is getting more and more corrupt. There’s movement on Connie’s (Lauren Ridloff) investigation that will require some dangerous research and document pilfering. Eziekiel (Khary Payton) appears to be making a good recovery and is helping out other people in medical needs, though it takes some subterfuge from Carol to get in on his plan and provide him with the assistance he needs.

Basically, Trust raises the personal stakes with everyone’s fuses lit and the stage set for things to get explosive in the last episode of this middle season segment. 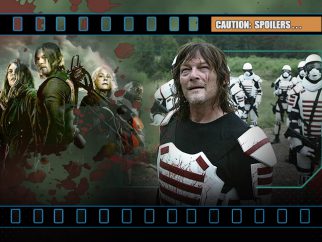