There's a lot going on in the latest 'Picard' but are the familiar faces in unfamiliar roles getting distracting?

Picard meets with the ‘Watcher’ and is surprised by a familiar face, though not one in the role he was expecting. Seven and Raffi plot to free Rios from his prison transport and Agnes finds herself forced into a fateful choice that will affect the team’s chances of ever returning home.

And amid the skyscrapers of Los Angeles, one young woman ponders whether she wants to reach for the final frontier and a doctor is made a life-saving offer he cannot refuse – but at what cost?

We’re at the halfway stage of Picard‘s Season Two and in many respects, it has proven itself far superior in execution and ideas to the first season. There are Trek touchstones galore and a sense that dealing with the elder statesman of modern Trek has given the series a chance to feel like it’s book-ending an era (though we still have a fair way to go – half this run and then another). I’ve liked the fact that the show is taking advantage of its longevity to add in organic moments and elements of its mythology, an Easter Egg here and there is always welcome in a franchise that’s earned the right to do so whenever it pleases. So far in this run we’ve had distinct plot-specific references to Assignment: Earth, City on the Edge of Forever, The Voyage Home, The Best of Both Worlds and wider TNG entries to name but a few – sometimes a doff of the hat, sometimes some all-out pilfering. But, if I’m brutally honest, there’s also an increasing danger that with the fast-accumulating ‘Heh -look what we did there!‘ elements, it could become a slave to its own sense of nostalgia and collapse under its own weight.

And in ‘Fly Me to the Moon‘ we get evidence of both its fancy footwork and arguable mis-steps… because everywhere you look there’s something deliberately familiar, explained or not.

Orla Brady, glimpsed at the end of the last episode returns. Given the reveal of her new character and mission-statement  (this time she’s not actually Romulan Housekeeper Laris but a Cosmic Guardian named Tallin) she’s largely there for a series of talk-heavy exposition dumps that give us more clarity on what may be responsible for the alteration in the time-line.  Tallin belongs to the same secret organisation to which Gary Seven (Robert Lansing) worked way back in TOS‘ Assignment Earth – essentially acting as guardians to historically important individuals to make sure events happen as they should (think the TVA with less Loki). In this case Tallin’s oblivious charge is Renée Picard (Penelope Mitchell) – Jean-Luc’s ancestor many times removed – and the first of that bloodline to venture into space…apparently destined to be one of the crew on the upcoming trip to Europa where she will discover an important microbe that changes the way humanity thinks of the universe. If she doesn’t make the journey then for some reason humanity descends into the fascist hell we saw in the altered future.

Tallin’s meeting with Picard is a little strange on several narrative levels. For a top-notch ‘Watcher’ with incredible access to remote-view her charge, she doesn’t appear to have noticed even the slightest ripple in events other than the young woman seemingly having the usual kind of concerns if you were about to sit atop a massively exploding device powering you out of Earth’s orbit – which makes one wonder how effective and prescient these guardians can be before things go wrong.  Are they there to watch but never interfere (Highlander) or guide for the greater good (Buffy). Either way, if Jean-Luc hadn’t appeared, would she have remained oblivious until the damage was done? Secondly, while viewers spotted clues to the connection last week, Picard himself is becoming a walking wikipedia of centuries of  Trek‘s mythology and is able to deduce the link between Tallin and Gary Seven in a matter of seconds.  Bizarrely, for such a cloak and dagger outfit with such a delicate job, Tallinn accepts Picard’s story pretty quickly and opens up on all the details of her highly-confidential mission to a complete stranger. She does remind him that she doesn’t take orders from him, but it would have worked much better to have her far more skeptical of Picard throughout and perhaps even visibly furious that she suddenly has a group of free-range time-travellers running amok through her backyard rather than it being slightly inferred. And I may have missed it, but is there ANY given reason that Tallinn looks like Laris? Continuity-wise it makes no sense that the character would naturally look the same as Laris (unless in a wonderfully sly move being offered by fans, the character is the shape-shifting ‘Isis’ from Assignment Earth?) and if it’s simply a coincidence it’s distracting, so there does need to be some explaining and even a vague ‘I thought this form would prove more familiar‘ would be something, but Picard shrugs it off. This is one of the problems I’m starting to have – not that scenes can’t be explained by quantum singularities and earnest fans, but that the script demands that its title character doesn’t behave or say what the circumstances in the story should demand. Picard used to ask all the right questions, now he’s conveniently  asking none of them.

It’s great to have Brent Spiner playing yet another character – technically his seventh, I think, in the Trekverse. Spiner gives his Dr. Adam Soong a tragic edge, a brilliant scientist with a profane mouth (still hard to get used to the f-word in Trek), but also father breaking all the official rules of ethics in an effort to save his dying daughter. In many ways it’s an interesting halfway-point between his ‘good’ and ‘evil’ characters to date… a person who is rightly condemned by his peers (including Lea Thompson – who directed the previous two episodes – now in front of the camera) but with whom you sympathise. The initial meeting between Song and Q sparkles with good dialogue as the doctor initially dismisses this stranger as a crack-pot. But to conveniently have Isa Briones as Soong’s daughter? Okay, dominant genes skipping like stones through the centuries are one thing but right now it seems more like an artificial effort to give all the Season One regulars something to do – in this case making the Soong family tree almost a straight line. Perhaps this will be explained more given that Soong seems suspiciously less than eager to talk about her mother. (Could she be a clone?) Each familiar element placed in the series taken individually are fun, but this clowder of guest-stars begins to make this all feel like a ‘special’ reunion/surreal episode rather than a genuine time-travel saga and it’s beginning to lift me out of the experience.

For all the manic cosmic dot-joining, there’s also a lot of dangling and potential plot-holes. Aren’t the police likely searching for Seven, Rios, and Raffi as wanted fugitives after their escape? Is the episode’s errant French police-officer just going to accept a hole in his memory and a sudden lack of his spleen? What is the actual extent of Q’s actual power-loss… even without his full omnipotence, he still seems to be able to come and go as he pleases and fake his identity as a psychiatrist in what should be a top-notch facility that we are shown is obsessed with security and with amazing tech for 2024. Hopefully some of these aspects will be cleared up in coming episodes.

Jonathan Frakes helms Fly Me to the Moon, proving that this series is continuing with top-notch directors and, of course, Frakes has a stronger connection than most to the material. This is still a fun series, light-years ahead of Discovery‘s story-telling in my opinion. We have Rios’ arrest sorted (not sure if the escaping detainees will cause ripples in the time-line or if his badge is going to turn up again – I suspect it will given that we’re unlikely to have seen the last of Sol Rodriguez), Seven and Raffi are still arguing like only those in a close relationship can and there are more developments with Agnes as she’s forced to shoot the Borg Queen but not before the matriarch’s psyche starts taking up some reptilian real estate in her head.  Given that the next part of the mission is to get all the heroes into an exclusive banquet to protect Renée, one suspects the next episode will be another mixture of fun and drama, perhaps a little like last season’s Stardust City Rag. Hopefully we’ll get to see more of Penelope Mitchell as Renée and flesh her out as more than the maguffin of this episode.

After three amazing episodes, a middling one and a pivot into the nuts and bolts of the mission, the series remains fun. Some will think this is the best episode to date, some won’t… I’m somewhere in the middle. While we wait for next week’s episode, try calling the number on the ‘business’ card Q leaves with Adam Soong: 323 634 5667… Q is expecting you. 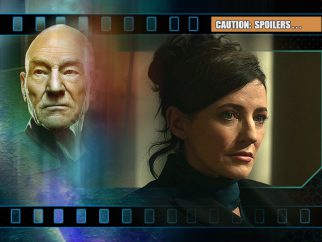 Lessons in Lunar-cy? Marvel debuts its ‘Knight’ at the Museum…