Lessons in Lunar-cy? Marvel debuts its ‘Knight’ at the Museum…

It's all myths, 'glyphs and gift-shops as Marvel exhibits its strangest series to date...

Steven Grant shambles through a humdrum life, an assistant at the gift-shop at the British Museum – more at home with the Ancient Egyptian exhibits he finds fascinating than he is with self-confidence or confrontation in everyday life. But when he returns home, after unexpectedly finding himself with a possible date lined up with an attractive fellow-worker, he goes to sleep with some new hope. However he ‘awakens’ to suddenly find himself in the middle of an Alpine town where a strange preacher is holding the townsfolk in his thrall and apparently ‘judging’ them to life or death. Steven also appears to have something the man wants…a golden scarab-like object. Grant would very much like to give the scarab away but a voice in his head and his own body won’t let him and suddenly a chase is on.

Awaking back in his bed, Steven finds he’s lost two days, missed his date and suddenly gained some powerful new enemies. But who or what are the voices in his head and can Steven survive the upcoming judgement?

Moon Knight is one of those shows that will quickly divide audiences. The title character doesn’t have the clear, cultural footprint of many MCU characters and even those who are familiar with the comics may only know one of various iterations created over the years. And the pilot, while it introduces a lot of fun and interesting elements, purposely grabs something from each version but doesn’t tie them together with sufficient answers… except their shared dangerous circumstance.

Are we following the story of Steven Grant, a mild-mannered gift-shopper stocker who may have a problem with sleep-walking (and, hopefully, has ankle-shackles attached to his bed for that reason)… or is this the tale of a James Bondian Marc Spector, a globe-trotting secret agent with a particular set of skills that allows him to take out small armies. Perhaps it’s neither – maybe it’s all about the (k)night terrors of an Ancient Egyptian avatar who dresses like a faded negative of a caped crusader. Given that they all seem to share the same body and are all claiming squatting rights, our ‘hero’ doesn’t really know and neither do we.

Marvel‘s tv strategy has divided into two avenues. For the likes of WandaVision and Loki it’s the idea of a status quo wrapped in an enigma inside a puzzle for which you are spoon-fed and bread-crumbed to the finale to find out what’s really going on. For the likes of  The Falcon & The Winter Soldier and Hawkeye it’s a more straight-forward mission statement with some morally complex bells and whistles added. Moon Knight is very, very much the former. With its fast-moving changes of locale and a central character with slam-cut identity breaks, this will a jigsaw series – probably more accurately a mosaic – where the hieroglyphical plot-lines won’t make a lick of sense for the time being.

The fractured nature of its hero is reflected in the editing as we whiz to and fro and across continents and the first 44-minute episode (with five more to follow) does a decent job of throwing out hints, styles and aspects of the diverse ground it will all cover. Marvel have noted this could be the ‘scariest’ show they’ve done so far and with the exception of a Hammer-esque chase through the exhibits late in the episode, there aren’t any spine-chilling ‘jump’ moments per se… but there’s some truth to the unnerving disorientation experienced by character and viewer. Everything seems a little askew and even in the light of day, sanity seems subjective. It’s not as technicolor a test of reality as, say, Legion, but it’s effective. It will all be judged by how the pieces finally fit together and its sense of momentum over the weeks to come, but it’s certainly a start.

There’s some nice attention to detail as we speed through London’s Soho, Alpine mountains and glimpses of pyramid power. Sharp-eyed fans spotted a box marked ‘Von D…‘ at one moment in the series’ trailer and there was immediate speculation that this could be a sly nod to the introduction of a certain Fantastic Four villain. Not so – sometimes a box is just a box… it turns out to be the less interesting (and apparently random Von Darrelman, a desert manufacturer and whose truck Grant steals as we criss-cross through the car chase. On Steven’s desk are an assortment of books about Ancient Egypt but also titles regarding ‘new’ Asgard and Wakanda. As for the glimpse we get of the full-on ‘Moon Knight’ persona… that’s going to take some time to get used to – the cowled costume feels a bit of a cumbersome design, better on the printed page than the screen but we’ll hopefully see how well it stands up to combat.

Oscar Isaac’s central role will likely be another marmite element. The very capable actor – who has impressed in the likes of Dune and the final Star Wars trilogy (as Poe Dameron) – is given the tall order of playing several characters, sometimes in the same frame – who may look similar to each other but couldn’t be more different. His ‘appy-go-lucky London gift-shopper has an accent that is consistently inconsistent, wavering between acceptable twang and outrageous Dick van Dyke-isms that may feel like fingers on a chalkboard to those south of Watford. We haven’t really met the other personas to any deep degree, except in brief moments of drive-by drama, but Isaac changes his inflection, his gait and body-frame in subtle ways that work well. He manages a lot of the physical comedy needed. Amid the terror of flashing in and out of his own life, there’s plenty of humour – including Grant’s efforts to hand over a golden scarab to bad guy Arthur Harrow where his own limbs are acting up at the whim of the voice in his head and the car-chase scene that involves some close-quarter combat with cupcakes.

Ethan Hawke is also interesting casting as Harrow. Not so long ago it appeared that Hawke was verbally disinterested in any superhero-related projects, but he’s been given a complex villain here that seems to have intrigued him: a man whose belief-system in ancient Egyptian moral judgement can have very positive or negative results for those who take their chances with the ‘scales’ on his arm. He has that furrowed brow, long-distance gaze of bristling stillness that all cult-leaders share and which clearly marks him out as dangerous. How dangerous, time will tell.

Marvel are masters at taking their own source-material and steadily making it accessible, essential pop-culture entertainment that we care about – remember, there was a time when Iron Man was barely known outside his comic and action-figures.  Moon Knight probably doesn’t have the future in marketing props of Robert Downey Jnr’s flippant billionaire, but clearly the very premise has some potential and fertile ground to explore. Will it be to abstract for mainstream audiences – possibly… and the proof of concept will be in the full-series’ over-all story and pacing.

So far, despite its fault-lines, it’s at least intriguing enough to come back next week… 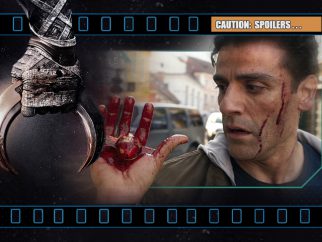