The second story in the 'Twilight Zone' revival is interesting but suffers some turbulence on its 'flight path less travelled'...

The second Twilight Zone episode sees a reinterpretation of one of the classic show’s most memorable episodes, Nightmare at 20,000 Feet – though now upped to 30,000… because, hey, inflation.  The original story saw airline passenger William Shatner becoming convinced that there’s a gremlin on the wing of the soaring aircraft, a creature that is trying to destroy the engine as it passes through a storm (but no-one else sees it or believes him). A remake of the story also formed part of 1983’s Twilight Zone : The Movie line-up where John Lithgow took the same role (and in one of the series best ever in-jokes, Third Rock from the Sun had Shatner and Lithgow meeting where Shatner complains of being delayed in his journey by ‘something on the wing’, to which Lithgow replies incredulously: “You too???“).

Perhaps wisely, this newest 2019 version – actually  set in the near future – doesn’t seek to follow the story template quite as tightly, more thematically. There’s no exterior threat, it’s all very internal. (Or is it?). Investigative journalist  Justin Sanderson (Adam Scott) is taking a break from war-zones where the horrors he’s seen have left his nerves somewhat shredded. But on an international flight to cover a conference, he finds an audio device left in his seat-pocket, one that he starts to play. He realises that it’s a podcast… but it is a ‘conspiracy theorist’ broadcast and one that he quickly notes is listing current events, but in the past tense: specifically aspects of this very flight – one that he’s  being told will disappear from radar within the hour and never be heard of again. When it’s clear that it is more than just coincidence or pure fiction, he tries to alert the crew but his own confusion about what he’s trying to say doesn’t help his case and simply gets him ear-marked as a ‘problem passenger’.  He continues to listen to the podcast as it starts revealing other of the ‘few known facts‘, but the only passenger that is taking any notice is an ex-pilot guzzling mini-bottles of vodka in the back.

Plane-based dramas are full of potential – cramming disparate and often irritable people into small spaces will always show interesting cracks and fault-lines to explore. (A host of 70s disaster movies and modern series such as LOST and Manifest have expanded it out as a starting point for more and less…) and this Twilight Zone does well in highlighting the equal sense of isolation that can be found even in crowds – and anyone who has travelled long-haul will recognise some of the classic symptoms.  Scott does fine in handling those duties and for much of the episode, the audience is with him in intent and intrigue – whatever the revelations to come will be. But unlike the best Twilight Zones, there’s just a lack of precise intent which muddies the waters (or air-streams).

Though this second entry is far better paced than the first episode of the revival, it still suffers from a timing issue, with an ill-judged, needless epilogue/coda that harkens back to Sanderson’s quoted article at the beginning of the story about  the ‘loss of civility’ – but one that feels at odds with the main thrust of the story (and undercuts a perfectly good ending a few scenes prior). It’s as if the show doesn’t have quite the confidence in its main story and is doubling down with additional comments on pack-mentality but never quite succeeds in fully joining those dots.

It’s a decent if imperfect entry and two episodes in to the revival, it’s easy to like the new Twilight Zone rather than love it – but whether it is offering anything new or compelling to the anthology/twisty-tale genre,  like its namesake undoubtedly did, it may be too early to judge… 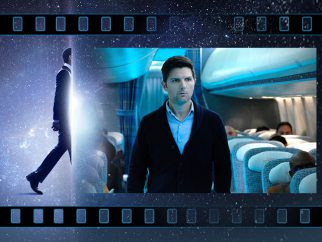