The snarky, sociopathic hit crime drama 'Killing Eve' is back for a second series - if you're Stateside, that is... (spoilers!)

It’s barely a minute after UK intelligence analyst Eve Polastri (Sandra Oh) skewered her quarry, the highly-financed, somewhat unbalanced assassin known as Villanelle (Jodie Comer), an act which surprised both of them. Villanelle has fled her Paris apartment and Eve is close behind. Both narrowly avoid a trio of medics who have apparently never heard of the promise ‘do no harm’ but by the time Eve makes it to the street intact, Villanelle is nowhere to be seen.

Now Eve, still in shock over what happened, must find her way back to the UK and work out what she’s done and what she does next. Does she have a job? Is she safe? Are the people she loves safe? Did Villanelle survive?  Even getting out of Paris is going to be a risk, but though she makes it on to the Eurostar channel tunnel train, she has no idea who and what awaits her back home.  Meanwhile Villanelle is badly wounded and manages to make it to a Parisian hospital – one that asks far too many questions about her injury. But, even anonymously, she has no choice but to stay bed-ridden as she recovers, asking  – in her own unique way – for help from the survivor of an horrific car-crash who occupies the bed next to her own…

But first: does Eve have enough vegetables for dinner and can Villanelle really tolerate such appalling fashion-sense?

The first season of Killing Eve (based on Luke Jennings’s Codename Villanelle novella series and developed for television by Phoebe Waller-Bridge) was a sharpened blade of a tv series, complete with a cut, thrust, parry and merciless twists of the knife – an experience so deliciously evil it was good and so good it hurt.  Full of violence, snark, domestic bliss and international intrigue it was almost impossible not to love it to death. over the course of a short run in made viewers invest in both the pursuer and the pursued, making them laugh and then cry but always coming back for more.

The second season begins thirty seconds after the end of the previous episode with both Eve and Villanelle separately fleeing the latter’s Parisian department and the rest of the episode is essentially tracking both women as they work out how to avoid immediate death or incrimination and decide what to do next. There’s a consistent sense of dread and panic for Eve on her journey back to England  and an equally consistent sense of annoyance and frustration for Villanelle who manages to get herself to a hospital but then has problems leaving it. Despite the urgency in both their cases, the episode lacks the frenetic pace that the first run led up to, but it does a good job of re-establishing their respective characters and approaches to obstacles.

Sandra Oh is one of the most believable heroines out there because even in the slightly heightened reality the show exudes, she’s essentially as flawed as the viewer – yearning for a little excitement in a pedestrian life and then finding all the angst and problems that come with the wish fulfilled. Striking, but not ‘glamorous’ in the conventional way, Oh nails every moment of the clumsy attempts to make sense of the world she’s found herself in and not always liking the decisions she makes for herself. Equally,  in lesser hands, Villanelle could be chewing the scenery and be simply a pantomime antagonist, but the Emerald Fennell-penned script meshed with Jodie Comer’s superb physical performance (full of ticks, glances, expressions and even the odd pratfall) is balanced to the extent that it’s all executed so it strikes with perfect, scorpion-like precision. Comer’s Vilannelle might be a deadly sociopath but there’s an internal logic and at least some sense of feeling there that informs everything she does and it’s huge fun to watch her go about her business without being weighed down by worrying what others think.

The supporting cast are no less impressive. Versatile screen actor and Shakespearian-level dramatist Fiona Shaw glides in and out of certain scenes like an aloof national treasure crossed with a dangerously subversive great aunt, her intelligence chief Carolyn Martens managing to make you deliberately underestimate her tactics and yet understanding why Eve somewhat wants and needs her approval – or at least some honest answers. Owen McDonnell’s portrayal of Eve’s other half is also a quiet triumph of understated frustration and it’s hard not to side with him as the innocent and wronged party when all he wants to do is support his wife and have some understanding of what she’s facing… and she keeps him at arm’s length (perhaps for his own safety and possibly because her attention seems consumed by her complicated relationship with Villanelle).

It was possible that the show might rest on its laurels or, alternatively, skew things too far in its second run, but on the basis of its opening gambit, it retains all the needed ingredients to make this another brazen banquet of guilty pleasures. Yes the opener (entitled ‘Do You Know How to Dispose of a Body?‘) is a scene-setter but it’s one that promises much more to come.

The show, which is simulcast on AMC Networks’ BBC America and AMC in the US , is not part of the UK license fee and with various monetary deals in place, it may be June or later before the show makes its return to British screens. It’s worth killing time waiting for. 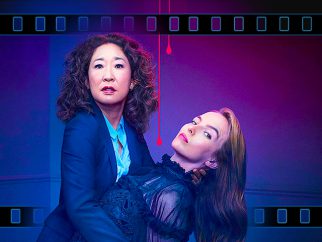