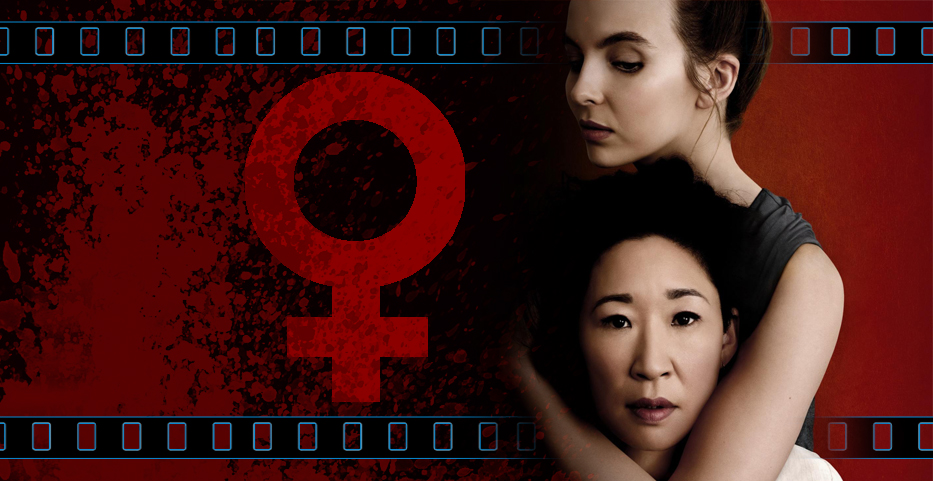 Eve Polastri (Sandra Oh), an American analyst working for MI5 in London, often finds herself barely on the periphery of the genuine international intrigue that supposedly goes with the job. She’s an excellent researcher, intuitive and smart… though not as focused as she’d need to be to achieve any further promotions in the department. She’s fiercely loyal to the job and her understanding colleagues, but under no illusion about her prospects or the less-than-glamorous nature of the job, but she quietly longs to get out from behind the desk and apply her observations to something more immediate.

When a diplomat is killed in Vienna, Eve is convinced from the limited amount of evidence available that the assassin is a woman though she’s told by the highest-level brass that she’s demonstrably wrong.  She isn’t.

The killer, known only to prospective employers as ‘Villanelle’ (Jodie Comer), has managed to fly under the radar and only a few people in the security services are even aware she may exist – her ‘work’ often put down to other operatives. A sociopath with honed precision, she kills without mercy and for the right price.  Now she’s heading to London to tie up a loose-end and though neither woman realises it, the mission is going to put them on a collision-course that’s going to end up with more dead bodies and  very particular attention from those who will do anything to anything to protect their secrets…

But such cat-and-mouse games can have bloody consequences…

Right from the outset, Killing Eve has the kind of balance between smart and style that a lot of detective and drama shows would kill for… but for which they often fall short. There’s a lot of writing and production talent out there that can get one aspect right – the drama OR the humour, the action OR the dialogue, but it’s quite rare to get the balance and connective tissue just right as a satisfying package.  Though pitched in a darkly humorous way, there are elements of the series that are utterly brutal – Villanelle dispatches her targets with a cold, clinical expertise and others that are hilariously dry and sardonic – Eve’s everyday life is a disorganised, organised mess, yet they both feel organic to the story.

Like the more fantasy-fare examples of Ghostbusters or the recent Annihilation, it’s clear that much of the advance coverage has dealt with the fact that the two leads in Killing Eve are female in a genre often dominated by men – that ultimately being as important or relevant as you choose to make it. There’s no denying that it’s a breath of fresh air in some respects – though television detectives have fared better in primetime gender equality than on the big-screen (especially in British / European productions ). Yes, it’s unusual to have a serial-killer / assassin that’s a woman (if you discount the likes of super-sexy OTT gymnastics from the likes of Jolie, Johansson and Theron etc)  but perhaps there’s more to be made of the fact that these are simply  interesting characters and that the cat-and-mouse aspect of two very different people circling each other is a basic enjoyment which is further enhanced by the subtleties of a female dynamic. (Take away the female aspect and we have something slightly akin to another edgy UK hit, Luther).

You may think the female factor is the most important here – creatively and professionally… The bottom line is simply this: Killing Eve is great fun for everyone involved and everyone watching – but the sisters are doing it for themselves…

Sandra Oh – perhaps best known for her role in Grey’s Anatomy – has the right amount of humanity for the role: despite the nature of the job, she’s immediately recognisable as a person who is good, indeed whip-smart, at something but  rather useless at other things. As an analyst she’s clever and intuitive, dogged and determined to the point of stubborness, but also bored and frustrated by a job with MI5 that’s nor remotely interesting as it sounds. Professionally, she’s becalmed – her smarts blunted because she’s also a person who tends to blurt things out and has little time for idiots. It’s not a cold, clinical Sherlock-level of indifference or arrogance – she’s very much a people person when it’s with the right people – but she could happily burn a salad while studying her files, burp in the middle of a meeting or forget to buy her own birthday cake.  Her relationship with husband is wonderfully comfortable – but the kind of comfortable awkwardness that only comes with time and a slight laziness and intimate shorthand.

In some ways, Jodie Comer has the more difficult task… Oh’s character relies on our warmth for her, but Comer has to make us interested in a much colder character, one that has the potential to remain a blank-slate, merely a mirror to those in her orbit. Villanelle is a different animal, to be sure, but no less well-realised. She’s an utterly streamlined sociopath, unashamedly emulating the traits of those around her and mercilessly adding them to her arsenal like an app or hijacked facebook algorithm. Perhaps it is that mirror aspect between the two lead characters that keeps the cat-and-mouse element the most intriguing: that Villanelle might have a twinkle somewhere behind the eyes …that maybe, just maybe, she’d actually like to feel some of the emotions that people expect from her, but she’d likely single-handedly smother a kitten rather than acknowledge it. Equally the often desk-bound Eve possibly finds something to quietly admire in Villanne’s no nonsense approach to being free and overcome obstacles…. but would equally deny it. Each are fascinated and appalled in their own way by the conditioning of the other.

Phoebe Waller-Bridge, who has adapted Killing Eve from Luke Jennings’ novels, is rapidly being recognised as a force of nature in edgy entertainment. Her writer-actor double-dutied comedy-drama Fleabag has gained international recognition for it’s ‘take-no-prisoners’ approach, she’s one of the voice-stars of next month’s Star Wars ‘Solo‘ standalone and there was more than serious talk among the geekerati that she was a contender for the role of the first female Doctor Who. Here she brings everything to the table, clearly relishing the potential that the novels first explored and giving it a twist of her own. Supporting players such as Fiona Shaw, Kirby Howell-Baptiste, David Haig and Owen McDonnell are not mere window-dressing but genuinely contribute to proceedings with intent and great dialogue.

Together, all these factors come to form a delightfully wicked, intriguing ad dramatic whole, one that takes international cues and looks likely to be a success on both sides of the Atlantic.

You may think the female factor is the most important here – creatively and professionally and there’s no denying that hook. In that respect, Eve would fist-bump the air and take you for a celebratory pizza where she’d end up with half in her lap; Villanne would shrug, roll her eyes and do something more creative with the waiter and the pizza cutter. The bottom line is simply this:  Killing Eve is great fun for everyone involved and everyone watching – but the sisters are doing it for themselves…

Killing Eve was broadcast in the US  earlier this year and is being shown on the BBC in the UK from Saturday 15th September. 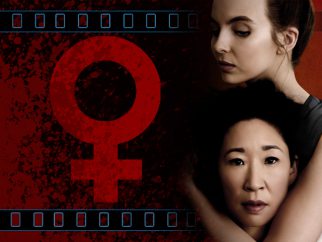