Death and the Maidens: The Return of ‘Killing Eve’…

'Killing Eve' is back - but its frustrating, latest episode (in the third run) avoids any close encounters...

Eve Polastri (Sandra Oh) survived the gunshot that nearly killed her but in the months that have followed she’s felt adrfit – determined to stay away from the world of espionage but at a loss on how to live a satisfying life. Even a visit from young Kenny, now working for an investigative website and determined to keep track of ‘The Twelve’, is little more than a distraction – she’s glad of the company but not the reminders of her old life.

Meanwhile Villanelle (Jodie Comer) has been having a fine time in Europe, not quite successfully forgetting Eve, but also determined to move forward – though she’s convinced by her old teacher to undertake some new missions.

It seems nothing can bring these two women back into each other’s orbit, but a tragedy might put them on a collision course once more…

The first season of Killing Eve was more than a guilty pleasure, it was well-measured chaos, anarchy and snark tied-up with a cyanide bow… the perfect present for those whose nihilistic attitude was accompanied by a sense of humour. Based on the books by Luke Jennings is was a wonderful adaptation by rising writer/production star Phoebe Waller-Bridge that complemented the source material while finding its own unique niche.

The second season, broadcast last year, was fun but wasn’t quite as well-measured. The performances by Oh and Comer were just as good, each revelling in the opportunities they had to flex different muscles, but the story was more wayward, less refined, strutting with confidence rather than gliding with murderous intent – essentially letting the performers carry the weight and less bothered with structure. It was as if the decision had been made that the innate chemistry was everything and the plot was just heavy doses of satire there to prolong it. Though there’ an inevitable truth to that in many dramas, it felt less like cat-and-mouse and more like Desperate Housewives meets Wylie E. Coyote.

On the back of multiple awards for its stars (and with Comer playing a blink-and-you’ll-miss-it role as Rey’s father in The Rise of Skywalker), the third season was still something to look forward to and the opener is fine, but is also frustrating on a number of levels that don’t help its cause. Once again, Oh and Comer are there and raring to go, but the story isn’t.  The cat-nip scenario of two-people-chasing-each-other is firmly on hold and that essential electricity between Villanelle and Eve is denied by never having them in a scene together – each coping with the aftermath of last season’s finale in very different, diverse ways: two separate stories only connected by the past not the present and each refusing to fully acknowledge the other’s effect on them. Eve – unknown to her assailant – has miraculously survived the bullet that Villanelle fired, an explanation given that she was found by passing tourists and rushed to a hospital – which feels a lot like a ultra-convenient cliffhanger resolution along the lines of ‘with a bound she was free...’ (and it seems unlikely that Villanelle wouldn’t have checked that). If our psychopathic ingenue did know of Eve’s survival, or possibly didn’t intend to kill her, it certainly doesn’t show as she meanders around getting married, renewing old acquaintances from her training years and assaulting people in bookshops. As you do.

Eve’s own return to a mundane existence is going less well. She’s aware that working in the kitchen of an Asian restaurant (which the show tricks us into thinking is Hong Kong until it turns out to be London) is a waste of her intelligence-analysis training, but is determined to live a boring life after her near-death experiences. But frustrations with the state of her separation from husband Nico (Owen McDonnell playing the most sympathetic yet abused character in the entire series) who seems to have suffered a nervous breakdown and her need for some human contact mean she’s really as restless as ever. However it’s the murder of someone close to her late in the episode that will ultimately and inevitably drag her back into the world of espionage and personal revenge.

There’s fun to be had in the look-at-me  background of various shots – one television plays Fawlty Towers, another has what looks like a classic Eastern actioner, perhaps together that’s another mash-up the show could fit within.

A rather sad and tragic ending reminds us that it’s not all fun and games and that there are consequences to the dangerous world in which our characters operate and one hopes that the magic mixture of humour and drama reasserts itself more evenly in the coming weeks, bringing our ‘heroes’ back together but making us understand why neither of them has successfully killed the other so far… 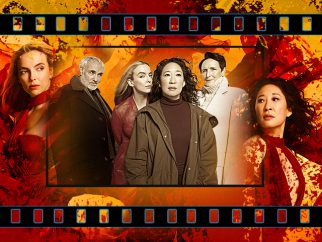