The 'Transformers' franchise coveted curves and chrome, but a retuned and retro-fitted Bumblebee (now hitting DVD) deserves its buzz...

On the other side of the galaxy, a war rages between two metallic races, the Autobots and the Decepticons – and the evil Decepticons are winning. In the midst of battle, Optimus Prime orders faithful servant B-127 to leave the battle and find safe haven, a forwarding scout for them on a planet called Earth.

But his arrival does not go well and severely injured by pursuing Decepticons, he is left for dead, robbed of his voice and with a scrambled memory.

A young girl, Charlie (Hailee Steinfeld) is struggling after losing her beloved father to a heart attack. Unable to fit in with her remaining family (and her mother’s well-meaning but hapless new partner) or at school, she’s trying to find purpose and for now, that means working on the dilapidated yellow VW-beetle she’s found in the corner of a local junkyard.

But this is no ordinary car. B-127, or ‘Bumblebee’ as she names him when he miraculously ‘transforms’, is a confused mess. Can they find a way to help each other find a purpose… and possibly save the Earth as well?

Michael Bay’s Transformers has become a lightning rod for many people’s views on the good and bad nature of the ‘all-action blockbuster’.  Bay’s strengths are as a technician and strategist – with all the zeal of a military general he’s proven a visionary master at commanding big budget projects that produce kinetic, shrapnel-filled action-sequences topped with bullet ballets and explosions and hone in on climactic set-pieces like a guided missile on crack. He’s the James Cameron of chrome,  the Spielberg of steel and the Miyazaki of metal.  Handing him the keys to a franchise based around a kids’ toy that transformed from vehicle to robot warrior, would always have seemed like a no-brainer, a marriage made in stick-shift heaven.

But somewhere in the mix, Bay’s mission statement landed on just the wrong side of puberty. Robots kersmashing the heck out of each other simply wasn’t enough for him. By the time Bay had two Transformers movies under his belt, the franchise was as much about upskirt shots and curves of the feminine kind as it was about cybernetics. The likes of Megan Fox and Rosie Huntington-Whiteley squeezed themselves into halter tops and stilettos and pouted their way amid the carnage. (Fox herself noted her audition for Bay was letting him watch her get soap-suddy washing  a car). By the time the fourth film came around, the films were featuring scenes with adult characters talking about underage sex and how to get around it legally.

And yet the franchise, for all its sometimes sleazy subtext, was still a money-spinner. Critics could roll their eyes and wring their hands over metal fatigue, battle fatigue and a lack of creative originality all they wanted but the formula worked – box-office receipts kept ringing, an audience willing to turn up and tune out for the sake of spectacular set-pieces securing the fact that the Transformers juggernaut could never be fully crushed.

But it was a law of somewhat diminishing returns with the last Transformers movie 2017’s The Last Knight being savaged by critics and seemingly leaving the films with nowhere to go. The announcement of a spin-off, Bumblebee, to be directed by Kubo and the Two Strings‘ Travis Knight seemed like an unlikely Hail, Mary. Instead it could be its saving grace.

The master-stroke here is setting Bumblebee in the 1980s and powering-up the Autobot not with gas and electricity but sheer nostalgia suitable for all. Taking 21st century special-effects and marrying them with an 1980s soundtrack (The Smiths, Tears for Fears, A-Ha, even Rick Astley with nods to The Breakfast Club and St. Elmo’s Fire) and a near all-ages cinematic sensibility – one that echoes the like of King Kong, ET, The Iron Giant,  The Karate Kid and, decades before either of them another intelligent VW ‘Beetle’ for Herbie goes Bananas – works incredibly well. Then making the hero an intelligent tomboy girl who wouldn’t actually mind fitting in with the in-crowd but isn’t willing to sell herself or her outfit short in the process, sends out all the signals that the franchise had been ignoring for so long.

Cinematically, Bumblebee doesn’t push new boundaries or reinvent the crank-shaft…and if you wanted to be cynical you could make a case that it’s a feature-length homage of sights and sounds and style from an era when times were slightly simpler and hope more plentiful. But what it does  – and does with grace, style, heart and a long missing sense of hope, is reinvent the Transformers franchise, getting it back on track to the all-ages escapism it should always have been. There’s a lightness of touch that pushes character to the front and uses action to punctuate, rather than the other way around and that’s no bad thing. In this case, familiarity does not breed contempt.

Hailee Steineld made a big impact in the True Grit remake in 2010 and has subsequently built a solid career with some diverse choices (she also provides the voice for Gwen Stacy in Spider-man: Into the Spiderverse) and she perfectly captures the 80s outsider with an almost John Hughes like whimsy while still remaining an interesting character. John Cena is a decent but still sceptical general whom the film wryly lets package the entire enterprise with a telling “They literally call themselves Decepticons. That doesn’t raise any red flags?“). Jorge Lendeborg Jr. (Spider-man: Homecoming), Pamela Adlon (probably best known for her voice work for the likes of Bob’s Burgers, Teen Titans – go and even The Big Bang Theory) and Stephen Schneider (Broad City) all offer able support.

There is plenty of room in the multiplex and DVD shelves for dark, brooding, sexy and sinister and in the right hands such entries can be just as good as anything else. Michael Bay sometimes gets far too many brickbats for doing what he does very successfully:  sex and violence, cars and carnage. And, arguably, there’s still a decent R-rated robot movie that can be made without molesting teenage flesh and trashing adolescent toys.  But Bumblebee proves that, box-office predictions be damned, Travis Knight is a director to watch and, frankly, someone who gets the very specific heart of the Transformers concept far better than Michael Bay ever did.

With this latest Transformers, now arriving on DVD, the sound you hear is no longer a drone, but a genuine buzz.

Bumblebee is now out on DVD, released by Paramount… 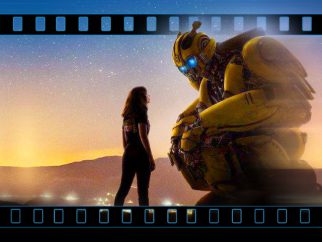