Intimate secrets of a Yahya brotherhood? 'Black Mirror' is back to shatter expectations, firstly looking at the personas we create online and the consequences...

Danny and Karl are long-time friends who party all night and all day and don’t have a care in the world… even Danny’s girlfriend, Theo is often a willing participant in living life to the full. But times evolve and  over a decade later, Danny and Theo have settled down to have a family and responsible jobs and Karl has yet to find his way, moving from one casual relationship to another.

Having not seen each other for a long while, Karl brings Danny a present, the latest up-to-date version of ‘Striking Vipers’ one of the games they’d endlessly play on a console… only now it’s a totally immersive experience that makes you feel you are inside the game itself.

But nostalgia can be a dangerous thing and, hidden behind game avatars, even more dangerous things can happen. Where Danny was recently worried his life with Theo was getting stale and predictable, he now has another concern: that his online experiences with Karl may be the exact opposite… Is it ‘game’ on or ‘game over’?

There’s been a long of talk  – not least on this site – of comparisons between the modern Twilight Zone reboot and the ongoing series of eclectic Black Mirror stories.  They are subtly different beasts. The former are essentially famous for being twist-in-the-tale stories with a tendency point to aspects of the human experience and the latter more the human experience in age of changing technology. Both deal in degrees of often high-concept ideas but they feel like distinct branches and limbs of the same tree. Black Mirror entries tend to run marathons while Twilight Zones are 100m dashes – though the pacing of the CBS All Access reboot has been one of that show’s stumbling blocks.

Charlie Brooker brought us the first incarnation of Black Mirror nearly a decade ago and though there were elements of shock value in its early stages, Brooker and the show have matured to create something that’s no less boundary pushing but often feels more nuanced and the current benchmark for cutting-edge but relevant morality tales.

Striking Vipers is definitely a story for our age, taking the idea of an immersive games-culture and showing how it reflects – or doesn’t – relationships in the real world. Almost everyone ahs a game-system of some sort and, nowadays, there’s a case to be made for relaxing in front of one rather than being consistently stressed out by the news.  And whether it be games or bulletin-boards, it’s now possible to reach out anonymously or create an entirely different identity at the touch of a button.

The design aspects of the Striking Vipers game are inspired, a photo-realistic yet enhanced obvious take on the ever-evolving Mortal Kombat game set-up and it probably does point to where games themselves are going in terms of tech and tactics.   Perhaps unfortunately (perhaps not), Striking Vipers ends up not so much about the level of pixel-perfect gamesmanship as much as the layers of definitive bromance between Mackie’s  Danny and his life-long platonic buddy. The episode sets up the relationships and the way they changed as the characters get older and it’s a believable shift – from the partying days of old to the responsibilities of the current.

There are minor quibbles. The episode cleverly – and quite sensitively – explores the very nature and boundaries of sexual identities, moving the ‘catfishing’ problems of bulletin-boards to the game arena…and it’s easy to see why Danny is rightly confused about his feelings towards a fictional female character (with a real-life male personality) and what that means / does not mean for his own position and friendship (not to mention his marriage).  Yet, while the male characters agree they’re not ‘gay’ in their everyday lives, it’s less easy to buy that from Yahya Abdul-Marteen II’s Karl who obviously is attracted to a male avatar (Danny’s alter-ego ‘Lance’, played by Ludi Lin) from the outset, despite it being his best buddy.  The question therefore becomes not Karl’s sexuality (which ultimately seems to include men, women and…. polar bears) but simply whether he feels the same about his friend in and out of the stimulating game.

Danny’s wife Theo (Sleepy Hollow‘s Nicole Beharie) who has begun to sense Danny’s frustrations about the less exciting, corporate, nuclear-family unit is played well, essentially the potential victim of the story, but one who shows inner-strength in her determination to keep their love intact. It’s tempting to think the story could turn into a revenge story on her behalf, but it takes a more sensitive if controversial route by the time it is played out. It’s not entirely a satisfying ending, but the journey is both funny and poignant, if entirely surreal.

All the performances here are good and the actors play to the personal questions of the idea rather than the high-concept ideas. That being said, Mackie and Klementieff have several Marvel movies under their belts and Yahya Abdul-Marteen II was seen as Black Mamba in Aquaman – and will also appear in HBO‘s Watchmen) so high-concept stories are familiar ground.

Striking Vipers won’t be to everyone’s liking – it’s not on the level of acclaimed and more organic entry San Junipero – but it works as a topical curiosity, not really coming to any firm conclusions or ideal solutions but raising its eyebrow in non-judgemental fashion. 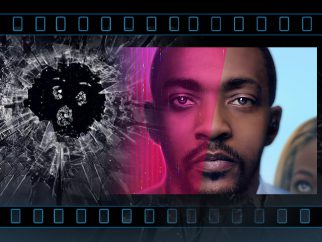