The much-anticipated second feature from Jordan Peele cranks up the tension wonderfully, but isn't sure where to go next...

In 1986, young Adelaide strolls off from her parents while visiting a beachside funfair at Santa Cruz and finds herself entering a rundown funhouse, complete with a chamber of mirrors that don’t seem to be showing quite what they should.  When her parents finally find her, she refuses to speak of whatever happened in there, but its clear that, years later, the experience lingers at the edges of her mind.

The grown-up Adelaide (Lupita Nyong’o), now with husband and two teenage kids, is looking forward to a relaxing holiday, but is shaken by how close they’ll be to that Santa Cruz beach. She’s never been back there and hasn’t told any of them – and doesn’t want to – about her childhood trauma, but there’s a growing sense of unease around the family trip to the beach, something that goes beyond the forced socialisation with their friends, a more affluent couple who aren’t afraid to show their wealth.

Adelaide knows something is ‘off’ but can’t put her finger on what it is until the silhouettes of several figures appear at the end of their driveway. They are frightening enough in their stoic silence, but when they breach the beach-house, the real terror begins.  Because there’s something more than familiar about this family of intruders… and with no sign of the police arriving any time soon, Adelaide is going to have to fight for her family and very life against a force that desperately wants both for itself…

It’s not that ‘Us’ brings us an entirely new banquet of horror or bank of new tricks – it’s more its ability to serve up a knowing smorgasbord of attitude and tension. Horror aficcianados may be ready for more than one of the jump scares and some of the narrative sleights of hand aren’t quite as shocking as the film wants them to be, but the strength is in that delivery system  – and the key to that is Black Panther/12 Years a Slave‘s Lupita Nyong’o. Her ability to shift between terrified victim quietly haunted by past trauma and the determined, militant matriarch she must embrace to protect her modern family is quite an achievement and it is she that holds the camera’s attention when the film threatens to meander into the shadows.

Peele knows his horror iconography, sometimes name-checking his influences within the script or set-decoration and the weapon of choice being pairs of scissors is no accident (speaking to both horror traditions and the deeper idea of two-pieces needed to complete the whole). A cross between Invasion of the Body Snatchers, Night of the Living Dead and even last year’s Hereditary, there’s a psychological edge to the result, a cultural commentary if you want it, but one that keeps the chills front and centre.  The result is not as bloody as the ‘R’ rating might suggest and Peele wisely displays the ability to generate mainstream menace rather than wholesale carnage.

There are times when the film becomes too abstract for its own good, trying to be simultaneously enigmatic and mysterious about the threat but yearning for the moment it can be full-on apocalyptic – a sense that it wants to give us a horror genre hero as resonant as Sigourney Weaver’s Ripley, but can’t quite decide whether Alien or Aliens should be the template for Adelaide’s challenge. The earliest scenes are the best, the slowly unwinding from the mundane, something that even Adelaide explains that she feels but can’t quite quantify – with the audience largely in the same situation. It’s that innate sense of ‘wrongness’ that holds the attention and makes the hairs prickle uneasily. Once the canvas opens up a bit, once the door is cracked open and then flung wide to something more than a shadow with scissors, the story faces that typical tricky cinematic dilemma on playing out its pay-off.

Winston Duke (whose star also rose with Black Panther) as Gabe is the deliberately under-stated, well-meaning but ultimately ineffectual father of the family suddenly out of his comfort zone and Shahadi Wright Joseph and Evan Alex have their moments as the family’s children Zora and Jason. The fact that they are all asked to portray the shadow versions of themselves, each managing to shift their posture and movement so effectively, shows their true range.  The multi-talented Elisabeth Moss (A Handmaid’s Tale also makes the very best of an otherwise strictly supporting role.

Amid the horror, there’s some gentle familial banter and genuinely well-timed humour (including the family’s barely-tolerant reaction to Gabe’s string of ‘dad-jokes’ and a wonderfully fatally-flawed smart-home system. Paced like an early-career Wes Craven taking on the Twilight Zone, but with a knowing beat that’s wholly contemporary (and not just for casually putting a black family centre-stage in an era when that shouldn’t be that rare but still actually is), this is an over-extended tale of first world fears. The truth is that however good it is, there’s nothing here that couldn’t be told just as effectively in half the running time. With a strong start and an enigmatic middle, it’s the ending (as is often the case) that signals  that this is a thriller with a great premise rather than a complete, tight story and it’s that loose-end logic and less interesting wider world-building which will mean you’re likely to leave the cinema having liked the film a lot rather than loved it.

Peele’s debut offering Get Out was a psychological horror and a study on racism, balanced so effectively it earned Oscar nominations.  This second outing doesn’t feel as well-judged, but certainly far superior to many of the more formulaic examples on the release schedules – and Nyong’o’s performance in particular could still be singled out as tour-de-force. 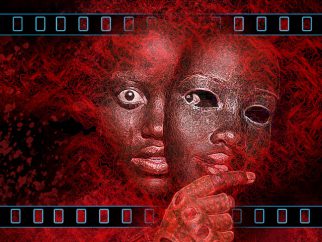