Summers change everything and when Dustin (Gaten Matarazzo) returns from summer-camp, boasting of a new love, he’s somewhat disappointed to find that the romances between Eleven (Mille Bobby Brown) and Mike (Finn Wolfhard) and Max (Sadie Sink) and Lucas (Caleb McLoughlin) seem to be demanding much of their time and even Will (Noah Schnapp) is bemoaning the lack of decent Dungeons and Dragons.  But when Dustin’s homemade radio-tower picks up a Russian code transmitting from somewhere in the heart of Hawkins, he manages to convince Steve (Joe Keery) – now having to wear a sailor outfit for his mall job dispensing ice-cream – there’s something strange going on.  Steve’s colleague Robin (Maya Hawke) merely rolls her eyes at the glee Steve has to have something else to do.

Elsewhere Joyce (Winona Ryder) isn’t feeling any magnetism, neither on her fridge door or with ‘just good friend’ Sheriff Jim Hopper (David Harbour), who is more worried about Eleven growing up far too fast for his liking. Hopper doesn’t think Joyce’s theories about a sinister explanation hold water, but he’s seen enough weird happenings and real dnagers in Hawkins to check things out for her. He doesn’t like what he finds…

Meanwhile Jonathan (Charlie Heaton) and Nancy (Natalie Dyer) are working for the local paper and suffering the thuggish misogyny of their peers. However when farming supplies start to go missing and several Hawkins townsfolk start to behave strangely, they too are eager to pursue the reasons, a story that could make their careers or break them.

Surely all these strange things can’t be connected, can they?

The original Stranger Things was that exquisite and rare phenomena of catching lightning in a bottle, an almost perfect blend of 80s nostalgia delivered from a three decade hence distance that allowed adults to look back in wonder and for kids to finally understand why their parents got misty-eyed over horror and action movie marathons.

While the second season of the show suffered by trying a little too hard to escape and broaden (and instead diluted) its own shadow  – because, really, how many of that run’s elements do you actively remember (other than adding a couple of characters’ relatives who now move in to share the spotlight) – the third takes stock of the show’s obvious, key strengths and goes about seeing how its core team reacts to the cultural shifts as well as monster threats. Indeed, has any show since Buffy quite so balanced metaphor and magic so well in its tale of adolescence and adventure?

No, Stranger Things 3, which took a sweet while coming to Netflix, used that time wisely to let the Duffer Brothers (who created the show) and their team figure out a far more satisfying story. That’s not to say that some contrivances are used to keep the three main strands of the story running in parallel before they dovetail into each other for the climax, but it’s all powered by good will and delivered with just the right element of disbelief and ‘here we go again’. If there are tropes and conveniences, which indeed there are, then they’re often deliberate stylistic punctuation that embroiders the passionate love-letter-to-genre story rather than them being the crutch on which to prop up something inferior, as often happens in lesser examples.  The idea that there’s a secret Russian mega-base under Hawkins is patently ridiculous, but in a story involving mystical portals and soul-slaying, there’s a suspension of disbelief required that fans have already agreed upon by now.

There’s visual and dialogue nods to The Thing, Terminator, Poltergeist, The Stuff, Back to the Future, Invasion of the Body Snatchers and Romero’s Dawn of the Dead as well as Red Dawn – but they are all there without apology, overt Christmas presents rather than coy easter-eggs… displayed on posters, glimpsed on screens and worn on sleeves like an adolescent heart. And while the recent Spider-man: Far from Home‘s ace-in-the-hole was its adolescent turmoil, it’s the Stranger Things kids and cast that have the over-all more convincing winning hand with the young actors so earnest and engaging that adult audiences are pulling just as much for happy endings and young love winning out as they are for some good crazy carnage along the way. Whimsical but wickedly wise, it’s essentially John Hughes meets John Carpenter.

Alongside the abstract and the overt machinations and machines, the ‘growing up’ factor also means an increase in middling bad language (nothing too bad, though there’s quite a lot of ‘shits’ being thrown around each episode, but hey…. teens) and more overt violence (again, nothing of Tarantino-level blood-shed, but a couple of iffy torture scenes and more genuine ‘ewwwwww‘, ‘Nooooooooooooooo!’ and ‘…that’s gotta hurt!‘ moments than you might expect). But once again, there’s the key: it never feels the show is pandering or going for the exploitative angle, merely keeping you slightly wrong-footed with its consequences and in wondering what will happen next. There’s actual consequence here and this is the kind of horror where the kids will be telling their parents when it’s safe to come out from behind the sofa.

Millie Bobbie Brown, David Harbour and Winona Ryder all know the territory by now and give it their all to expected effect – Harbour’s Sheriff Hopper is sometimes too brusque and drunk for his own good (though the character’s heart is always in the right place). Gaten Matarazzo’s Dustin remains the secret ingredient that binds everyone else together and gets the best lines. Sadie Sink’s Max is more prominent this time around, Dacre Montgomery (as her brother Billy) moves from bully to outright big-bad (though not without some sympathetic back-story) and Cary Elwes is introduced as a scene-chewing suitably self-centred and duplicitous mayor.  Elsewhere, Alec Utgoff’s Alexi grows on you throughout and you can’t spell America without ‘Erica’, so Priah Ferguson as Lucas’s sister (introduced last season) glides from snarky side-player to a central participant with absolute glee and just avoids being the irritant she first appears. But in the busy newcomer stakes, it’s Maya Hawke (daughter of Ethan Hawke and Uma Thurman) as the brilliantly acerbic, but ultimately vulnerable Robin, that serves up the best banter with the equally engaging Joe Keery’s Steve arguably steals every scene she’s in.

And after a lot of running in separate directions, the climax is worth waiting for, a multi-pronged effort with those prongs playing into each other. And the ending, without spoilers, is not without sacrifice and sadness. Some may see those elements coming ahead of time, but it doesn’t effect the emotional wallop when it comes (though a mid-credits coda – which is fine but one that I could have lived without – hints that some stories, despite appearances, may not be over just yet).

Perhaps nothing can quite live up to the freshness of that debut season. There’s a few too many characters to juggle this time around which means some getter shorter shrift than others and while a majority of this latest run still works amazingly well, it’s tempting to question how long the Stranger Things concept will continue if it is to keep walking that ‘nostalgebraic’ line between genuine retro-powered passion and mere opportunistic programming as its stars grow older.

However on the strength of this third run, I for one, would still welcome a return to Hawkins, Indiana for one more run. 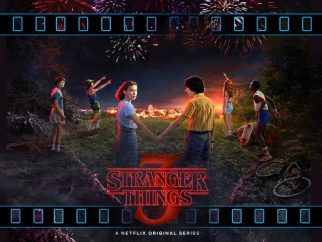