Can classic horror ever be reinvented? The latest 'Scream' takes a stab at less fear and more fun...

When Tara Carpenter gets a menacing phone-call that may be coming from inside her home, it’s just the start of a series of events that echo the massacre in Woodsbro over two decades earlier – the events that inspired the movie ‘Stab’. Tara survives the attack by the ‘Ghost-Face/Scream’ intruder but it becomes clear she’s only the first in line. Now her older sister Sam heads back to town with a secret that could further estrange her from her sibling.  As the bodies pile up, who is the masked killer and what are their motives?

As Sam seeks answers, she’s going to need the help of three of the original survivors – but will they want to put themselves through the terror all over again and have the genre-rules of the game really changed?

Criticising a 2022 version of Scream for being too close to its source material is an inevitable double-edged knife – steer too closely to the original and you’re uninspired, tilt too far away and you sever its central conceit. The Scream franchise, originally steered by the late Wes Craven, was (and is) at its very best and very worst when it edges up to other tentpole terrors and pokes at their support-structure. So, let’s be honest upfront… there’s nothing truly extraordinary about the latest ‘requel‘ (that frustrating new word for a film that wants to launch on the back of a classic but also wants to establish something new) – in many ways it makes its mark by offering some superficial modern updates to the self-aware template the original created all those years ago. But in doing so, it also speaks (and snarks) to the heart of the genre and how much (or how little) has changed for the better in recent decades.  However, unlike its nearest cousin, the modern reboot of Hallowe’en (which also dispensed with its numbering system in its somewhat meta-marketing) it embraces that hard truth deliberately and – as with that original, seeks to skewer it like a tasty kebab. But just who is wearing that horror Munch-themed mask?

Interestingly, the returning stars – Neve Campbell, Courtney Cox and David Arquette as Sidney Prescott, Gale Weathers, and Dewey Riley respectively – share the balance of power with the new cast. The trio are there for a deliberate sense of legacy but are generally well-used and are not treated as mere cameos. All three are still well-known names in the industry, but not so big that they’d ever overshadow the wider ensemble and they do exactly what’s expected of them even as their characters work out ways to defy expectations. Of the three of them it’s Arquette as weathered ex-sheriff Dewey that’s probably best served, which is perhaps more of a surprise than it should be. The newer stars handle their duties well. Sam Carpenter (a good performance from In the Heights star Melissa Barrera) is a twentysomething who got out of Woodboro as fast as she could several years ago and her younger sister Tara (Jenna Ortega) has never really forgiven her for leaving her behind. It’s this strained bond – and a secret at the heart of it – which provides the impetus for the film drawing all the characters into its web and some of the (albeit convenient) logic of how the story develops.  Additionally, we have Richie (The Boys‘ Jack Quaid) as Sam’s supportive boyfriend and Tara’s close-knit ring of friends including Wes (Dylan Minnette), Liv (Sonia Ben Ammar), Amber (Mikey Madison), Chad (Mason Gooding) and his sister Mindy (Jasmin Savoy Brown) who know the rules of the genre all too well.

Though it’s inevitably part of the territory, there are plenty of technical gripes you could throw at the film, not least of which is the usual fact that some of the injuries are inconsistent by the time the credits roll. For all the stabby-stabby scenarios, the actual attacks – superficially bloody though they are – mainly remain over-the-top and very theatrical rather than unpleasantly visceral compared to raw modern cinema. Your mileage on that and its implications might vary. Other injuries initially appear deadly but seem to only incur a few band-aids by the time the credits roll. The inevitable references made by characters to other movies, such as The Babbadook, It Follows and Hereditary are obligatory and knowing, but sometimes scattered in all-too-obviously for self-deprecating effect only.

Some of the strengths here are obvious, working well not because they are new but precisely because they are old-school with a new lick of paint. Despite the loss of guiding hand of auteur Wes Craven, Matt Bettinelli-Olpin and Tyler Gillett, the team behind a not-dissimilar guilty-pleasure Ready or Not) handle things well enough. Basic tricks of suspense and tension will always work in the genre. One potential victim wanders around the house opening and closing doors and the viewer gets ready for the maybe-inevitable moment when there’ll be someone lurking there… though the film stretches it out to breaking point, so you genuinely don’t know when it’s coming. Suspects/victims consistently evaluate each other and there are several scenes that play well as the balance of power keeps shifting. There’s still an Agatha Christie-meets-Criminal Minds guessing game to be had throughout and if you settle down to watch Scream you will inevitably start making predictions about the suspects that you’ll be second-guessing moments later. You may end up being right, you may end up being wrong, but by then it’s too late to complain – you’re part of the formula. And yet, for all its ‘gotcha!‘ moments, the hard truth is that Scream 2022 never really scares at any point throughout its entire two-hour running-time. There’s no single moment that brings you out in cold sweat, no new scene that will become iconic.

With the exception of spotlighting some empowerment, the latest Hallowe’ens doggedly repeated the old reverential formula with somber intent. Been there. Killed that. Scream, though covering the same ground like a well-honed tribute act, produces a far more watchable result if only because its intent is pure well-trodden popcorn entertainment. While Hallowe’en is an oft-repeated story where familiarity can breed contempt and content and it becomes ever creakier in the telling, Scream doesn’t go for superior smarts, or high-brow hokum… but a simple, engaging and familiar (if still macabre) punchline or catchphrase.

And as with all punchlines, it’s not the history it’s the delivery. 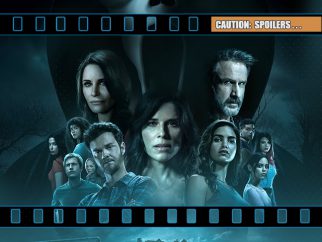 Patriotic and Profane: Is Peacemaker’s best defense a good offense?